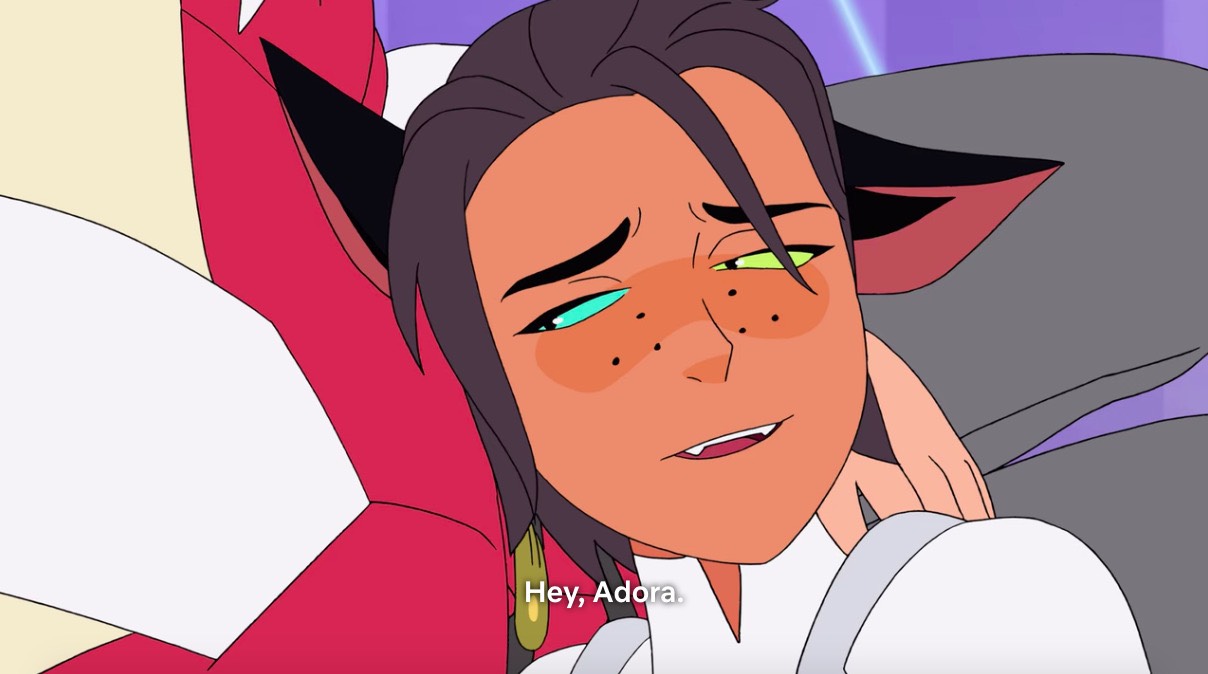 [Spoilers for all of She-Ra and the Princesses of Power]

Welcome back, around about Fall of last year I decided to push the limits on the power of ranking things and listicles in order to fully quantify the power of a catchphrase. Not yet satisfied, and with two more seasons of material to work with, I will exceed the paltry limits of “Top Ten” lists to present you with this, the second, and last, of my articles on that most noteworthy of Catra quotes “Hey Adora”.

As usual, I will be ranking these moments based on their overall creativity, audacity, impact, atmosphere, and, most importantly, how much they appeal to me personally.  In order to qualify, a moment must 1. feature the exact spoken words “Hey Adora”, 2. be initiated by Catra or a facsimile resembling Catra and, 3. be in response to either the direct or indirect presence of Adora.

Special Thanks to Megan Desfosses (aka NovaShoujo on our Discord) and Needle for the inception of this extremely important list and Nerd Clips HQ for the supercut.

Approximate timestamps and episodes are listed next to each item.

These didn’t qualify for not strictly adhering to the rules, but are nevertheless great in their own ways.

Still the best representation of Troll Catra, maximally designed to get under Adora’s skin, with not a little flirting thrown in for good measure. Still not a spoken line so not eligible, also “Hi”, is not “Hey” and linguistics matter.

The first real low point of the Catra/Adora relationship. Really has it’s ups and downs does this ship, Promise is still a great episode and this is still a great moment but rules are rules and “Bye” is not “Hey”.

Adora clearly working out some issues with this reversal. Adora tends to default to the “punch with your feelings” approach especially when it involves her friend/frenemey/enemy/friend again/girlfriend. Yeah this relationship is like a roller-coaster, but I’m here for all the melodrama.

The creep factor is off the charts in this one. Horde Prime is a master of showmanship, an important quality in any good supervillain and it shows in scenes like this. “Hello” is just way too formal for Catra, especially as it involves Adora, so this really just sets the scene for the inherent wrongness that is about to happen. The color tone also really helps set the mood, overall just a great setup line for the scene to follow.

Still the one and only time one of these has been used as an end of episode stinger. Foreshadows the next episode well enough but I think this is the weakest use of the phrase in the series, portrays Catra as feeling smug for getting the drop on Adora but otherwise doesn’t do anything to progress the relationship, also the setting is kind of whatever.

The first real meeting post S3, considering the previous episode’s meeting was actually Double Trouble. There’s a lot of hostility to this one given that the frenemeny status has more or less devolved to enemy status at this point in the arc. Catra is projecting a lot of her issues onto Adora in this particular interaction, some imagined, some real. Amazingly, the only “Hey Adora” in all of Season 4! It’s fine but doesn’t have the emotional depth of later or earlier versions and the setting isn’t particularly impressive.

13. Promise – 7:55
A fun “Hey Adora” is a rarity as the seasons progress, Promise manages to simultaneously contain the highs and lows of the Catradora relationship in one miniature self-contained arc and this is part of the “highs”. A relaxed/amused Catra is less guarded and more open to her inner feelings and desires, and naturally gravitates toward Adora.

12. Promise – 8:05
The midpoint between the previous “high” and the following “low” in the relationship arc of Promise. The concern in Catra’s voice is quite evident here, both when she’s relaxed as in the last moment, and extremely vulnerable, as in this moment, she’s more open and honest with herself. This is reflected when her first instinct is to call for Adora when she feels vulnerable. Overall nice but doesn’t hold a candle to the one that comes later in this episode.

Again we see that emotionally charged Catra is more honest in her interactions, earlier this episode we see an example of troll Catra using this phrase but the idea that Adora might be actually hurt draws out the obvious concern. This will of course become a typical interaction especially in the last season.

Shadow Weaver is still #theworst, even if she eventually gets her act together at the last possible moment. Having correctly identified the intense emotional ties between the pair, SW utilizes this perfectly to throw Adora off balance. It’s very unsettling and fits the mood of the episode really well.

Adora, subtly revealing her own inner workings, decides that Catra is the best representation to train against, not Hordak, not Scorpia, not some random Horde goon, but Catra. This is probably justified in her head as Catra being her nemesis or something but it’s also clearly just her not being able to let her attachment to Catra go even on the opposite sides of a war. She does manage to capture Catra’s sass really well though even if she hasn’t yet parsed out the real reason behind that.

Gotta end the season with a good “Hey Adora”. The setting for this one isn’t great, what with it being on a random tank in front of a random cliff. Emotions are high given that this is the first meeting post Promise though obviously they will get even higher as the show goes on. Smug Catra is also fun though this isn’t peak smug Catra.

Still a great introduction to Catra and the Catradora relationship. To borrow an anime phrase, Catra is very tsundere in her interactions with Adora, typically affecting a distanced, trolliish nature to their interactions pushed into an emotional corner which reveals her true feelings.To be fair, most of the trolling ones are also pretty flirty. The setting is still pretty bland though.

Still a really great setting, still love the winter outfits. Even more obvious that when frustrated and somewhat desperate, Catra immediately reverts to a place that’s comfortable, which is of course to mess with Adora. She’s out of her depth in the aspiring evil warlord dealing with deadlines from your boss business, but interacting with Adora is familiar and easy and helps her get back on her rhythm.

Peak smug Catra achieved. Really love the atmosphere for this whole interaction, the lighting is perfect, the snake jacket biker get-up is perfect, the desperation of two people who mean a lot to each other but just cannot get on the same wavelength is perfect. Just channeling a lot of emotions in this scene, neither the most emotionally charger nor the most flirty of interactions though so relegated to 5th.

Peak mean Catra and definitely the in retrospect the absolute lowest point of the Catradora…. well it’s really more of a sine wave than an arc I guess. Having been rejected by Adora yet again, Catra just takes out all of her anger in this scene and it’s beautiful if hard to watch. This is probably the second best pure setting for one of these, the world literally falling apart behind them is just great atmosphere. If I were ranking these on pure melodrama this would probably still be number 1 but I’m not so it isn’t.

Peak Catradora angst. The previous entry was peak melodrama but this is still the most angsty interaction in the series. Just a lot of misunderstandings, and misplaced priorities, and emotional baggage laid bare in this whole scene. This whole episode is just two people who feel an incredible connection with each other exploring that relationship but never quite concluding that, actually, they feel exactly the same for each other. There was always too much damage for Catra and Adora to come to the correct conclusion this early in the show, but it really feels like they almost could have. Still the best setting for one of these.

Chronologically, the final use of the phrase in the series. Peak girlfriend energy from Catra in this one, somewhat held back by the credits overlapping and this not literally being the confession scene. Although for Catra this is more or less her just removing any and all emotional barriers and deciding to just fully express her love. This is immediately after confronting her abusive adoptive mom who is a literal evil sorceress, and right before literally fighting a crazy giant monster so that Adora can escape. Relationship goals.

I mean it’s the header for a reason. If the last one was peak Catra being head over heels for Adora, then this one is Adora being head over heels for Catra. Just a whole episode of Adora being like “yes I will literally do the craziest thing possible to save Catra” culminating in a perfect mirror of the confession scene in the finale with Adora pleading with, what I have to assume is the love of her life at this point in the series, to give any sign that she’s ok. Of course Catra wakes up and says “Hey Adora”, of course she does, there was never any other outcome or possibility that she would say anything else, and if you’ve read this article you know why. There may be one more after this but this is the ultimate payoff for the catchphrase in the entire show, it has been through many ups and downs, cycled through numerous emotions, but here near the end it concludes in both it’s final state, and yet, it’s first state. Just a sassy cat girl, greeting her future girlfriend in the only way she knows how, with warmth, compassion, and a little bit of attitude. To abbreviate T.S. Elliot: The end of all our exploring, will be to arrive where we started, and know the place for the first time.