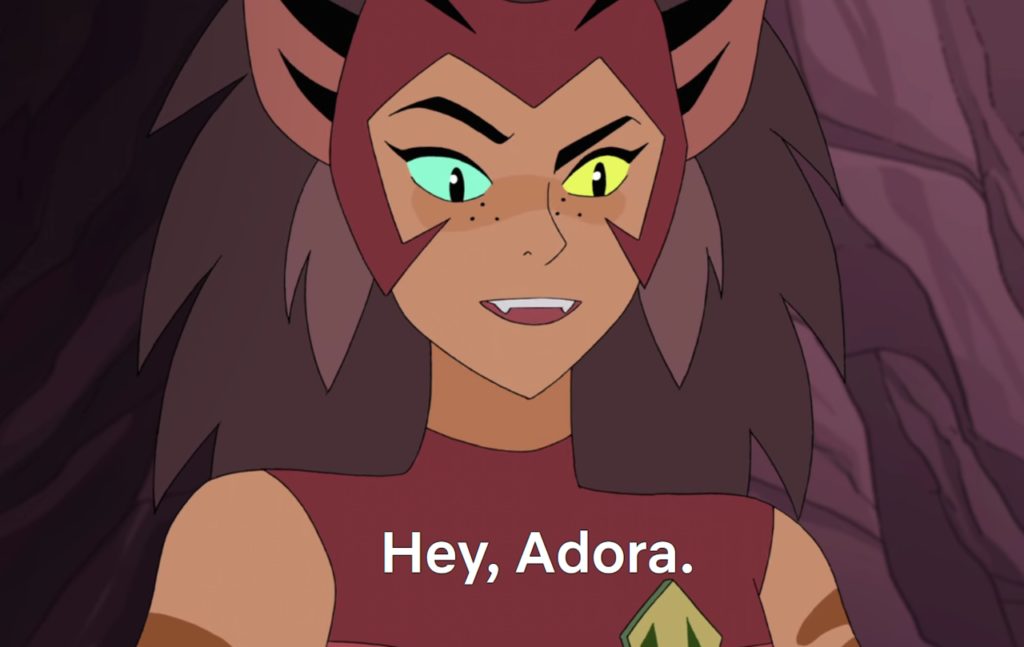 I feel like this is very self-explanatory but in the effort of prefacing this article suppose I must. One of the more endearing traits of the re-imagined version of Catra in She-Ra and the Princesses of Power is her propensity to begin any interaction with our main heroine with a sometimes genuine, sometimes sardonic, sometimes sinister “Hey Adora”. Nevertheless these moments are always appreciated. Some lesser minds might describe this as annoying, or infuriating, or a running joke that has long outlived it’s usefulness; these people are of course tasteless heathens, do not hate them but pity them, for they can not grasp it’s true power and are the poorer for it.

Now that we all understand the premise, it’s time to delve into the particulars. In this article I will be ranking these moments based on their overall creativity, audacity, impact, atmosphere, and, most importantly, how much they appeal to me personally.  In order to qualify, a moment must 1. feature the exact spoken words “Hey Adora”, 2. be initiated by Catra or a facsimile resembling Catra and, 3. be in response to either the direct or indirect presence of Adora.

Special Thanks to Megan Desfosses (aka NovaShoujo on our Discord) for creating these supercuts of every “Hey Adora” moment from seasons 1-3 and to Needle for the inception of this extremely important list.

Now let’s get to it. Timestamps from the episodes are listed next to each item.

These are didn’t qualify or didn’t make the cut, but are nevertheless great in their own ways.

The sheer amount of sass is unbelievable, petty trolling mode is Catra at her finest and this note is basically the embodiment of that emotion while simultaneously contributing to the overall strategy of distracting Adora. Unfortunately, it doesn’t meet the criteria, otherwise this would be very high.

The next subversion to the typical rapport delivers heavily on the pathos aspect of the trifecta that makes a good “Hey Adora” moment. After an episode’s worth of build and a season’s worth of emotional baggage, Catra finally decides to unleash her pent up angst and turmoil on Adora and the results are spectacular. Honestly I almost considered breaking my own guidelines to include this but rules are rules so this is will have to do with being the best of the subversions.

The rare reversal, the level of satisfaction in Adora’s voice really portrays how much she’s been waiting for this comeback. Doesn’t qualify for the list but would probably be middle of the pack, maybe higher if it were an in person retort instead of one via a robotic intermediary.

Promise – 7:55
The little chuckle at the beginning edges this above some of the other “light” moments. Catra is so amused by the novelty of the holograms it almost makes you forget the that this episode is more tragedy than comedy, almost.

Promise – 8:05
Pretty quick followup on this one, usually there’s spans of entire episodes between these but this is barely ten seconds later! More or less in line with the previous one but less jovial reflecting Catra’s growing concern at the proceedings in the episode.

A more frantic instance, the worry in Catra’s voice betrays her real worries before’s she’s able to recover and re-affect her detachment. It also neatly ties Adora’s dream/vision back into reality. Other than that it’s basically just some fuel on the fire for Catradora shippers everywhere.

The episode long emotional manipulation on the part of Shadow Weaver lends an unsettling, almost haunting, nature to this moment. Despite being the worst mom on Etheria, Shadow Weaver proves to have fairly good read on her long tormented daughters and utilizes this to her advantage to create a convincing fake Catra to Adora’s continued distress.

Surprisingly, the only time one of these has been used as an end of episode stinger. An effective one at that, Catra still has her trademark snide attitude but there’s now a somewhat sinister tone to her voice, foreshadowing the the latent tensions that will soon boil over next episode.

Another fake, yet fairly accurate, representation of Catra. Like Shadow Weaver, Adora has a pretty good read on her frenemy, at least on a surface level. Neither really seems to grasp the depths to which Catra’s damaged psyche will sink over the course of this season. Overall some classic, fun Catra trolling, which is sorely needed given the earlier and later darkness.

The grand reunion, unlike season 1, Catra and Adora don’t really spend much time in each other’s company so the “Hey Adora’s” likewise come sparser. Catra’s frustrations over the current situation she finds herself in and annoyance towards Entrapta makes her oversell this a bit. You can tell that she’s so focused on getting the tech and leaving this frozen wasteland that Adora et al. actually catch her off guard a little so she attempts to cover up this fact by playing up the usual “smug, aloof Catra” routine. The atmosphere for this one is of course excellent as are the winter coats so bonus points for those.

The first iteration, and our introduction to the character of Catra. What a beautiful bit of character work, efficiently establishing Catra as a character; sassy, aloof, and a bit playful. It also effectively conveys her relationship with Adora, decidedly friendlier than their later interactions, but with a hint of the sharper edge to come. All in all a great bit of storytelling even if it lacks some of the emotional weight of later moments.

Riding high on becoming the new warlord of the Crimson Wastes lends Catra a great deal of deserved smugness to this one. Also her just “I’m so done with everything” attitude gives it a meanness not as present in many of the former interactions. She’s just had a really hard past few days and is perfectly willing to derive any small amount of petty enjoyment out of seeing her rival in distress and it’s really delicious to watch in a soap operatic kind of way. Once again, the snake jacket and mood lighting really elevate this one above all the ones just set in some random forest or hallway.

The first greeting following Catra’s official heel turn has a lot of expectations to meet. After leaving Adora to potentially die what will our favorite cat themed antagonist say? Why her trademark catchphrase of course. The eyebrow raise really sells the idea that for perhaps the first time in her entire life, Catra actually feels superior to Adora, and is loving every second of it. Doesn’t quite have the emotional heft as the previous one (and some random cliff side outside Bright Moon doesn’t really have the same atmosphere as inside the Beacon) so loses a few points on that front but overall a good final “Hey Adora” to end the season on.

The big one for season 1, and the first major breaking point in the Catra/Adora relationship. There’s just so much emotional weight behind this after the season long buildup that it’s impossible not to rank this one highly. It really has it all, betrayal, sardonic smirks, a great followup speech, even mood lighting. Basically the high watermark of comparison for all “Hey Adora’s” past and future. Just barely edged out on the aesthetics ground.

I love the voice distortion filter they added for this one, it really adds to the creep factor. A new season finale means a new “Hey Adora” and I like to think that this competes quite well with the one from the season 1 finale. The completed breakdown in Catra’s physical body is offset by her almost singsongy tone. Rather than feeling distraught over the potential dissolution of reality she’s in fact quite pleased at this state of affairs.

The dichotomy between these two extremes perfectly represents her fractured psyche, although the fact that she’s quite literally beginning to come apart at edges is perhaps a little too on the nose compared to the more subtle approach used in “Promise”. Fortunately a great setting more than makes up for any lost points, catapulting this into the annals of “Hey Adora” history.