Fresh TV inc. is primarily known for creating the massive fan hit Total Drama as well as 6teen. Even their show Grojband enjoyed mild success. One show however always seems to be forgotten: Stoked. The show centered on six teenagers who worked at a beach resort and in between shifts would always try and catch the perfect wave. It was a good show, but unfortunately it lived in the shadow of 6teen. It started after 6teen, had a similar art style to 6teen, had many recurring cast members with 6teen, and in general just felt like 6teen.

This isn’t to say the show was bad though, or even a ripoff, but those similarities did lead a lot of people away from the show. I’m here to say though that the show is without a doubt worth a look. First off the show just feels right; it’s a fun show that to me defines Summer. If you enjoyed the nature of 6teen and the dynamics then this show will be right up your alley.

Second I’d argue this show has a better supporting cast. Although I definitely could get backlash on this, no one here feels like a bad guy. Even the meaner characters have a soft side, and that just adds to the fun. In addition no one ever feels left out, and every character feels fleshed out especially by the end of the show. 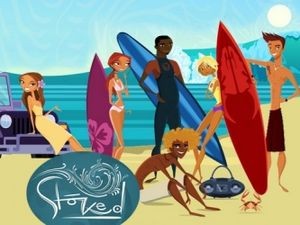 Third, you’re guaranteed to identify with one of the characters. Whether you’re a competitive surfer, relaxed hobbyist, a soul surfer, or someone who couldn’t care less, there’s a character for you.

Finally, it’s just a pretty show. The crew did a great job with the art style here, and it shows best in sunsets as shown above. If you ever just want to admire an animated show’s art, I’d say this is Fresh TV’s prettiest yet.

Although it wasn’t groundbreaking, Stoked was a fun, beautiful, summery show that definitely deserves a look.