I’ve decided to begin a new series of articles for the movies I find at my local thrift stores. You know the kind of animated movies, the ones that you had on VHS or DVD and were always hiding at the back of the movie shelf. You have no clue how they got there, your parents don’t remember buying them, but somehow, you own them. Many of these are just awful attempts to cash in on current bigger movies, but it turns out others are just poorly marketed anime. Our first movie was this series is somehow both. 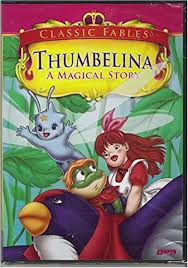 Back in the 1980’s and 1990’s there was a big trend for anime to be based off Western media. For instance, the Swiss Family Robinson and Little Women anime, as well as shows based off various fairy tales. Following this trend, in 1992 the anime Thumbelina: A Magical Story debuted on TV Tokyo. This was a 26 episode series based off the classic fairy tale, and concluded in 1993. At this time over in America, a Thumbelina movie was in the works from Don Bluth. Someone over at Starview Media (never heard of them either) decided to beat Bluth to the punch and have their own Thumbelina movie first. Instead of just dubbing the anime, which would have been far too much work, they first cut the entire 26 episode show into only 80 minutes. 13 years later in 2006, Digiview Media (again, no clue) rereleased the movie on DVD, and 12 years after that, I found a copy at my local Goodwill.

This movie is quite possibly the most insane thing I have ever watched. What I had to keep in mind with this movie is that I was only seeing about 15% of the original show. So somehow, there is another 85% that I have no idea about. This led to a movie with no real sense of pacing, so bare with me as I try to explain this movie the best I can. 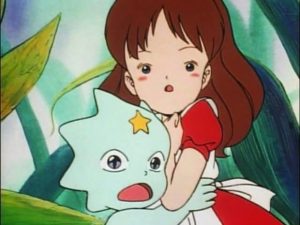 Little Maya is apparently the worst daughter ever, and so her mom goes to the witch that lives on the edge of town for help. The witch gives her a copy of the book Thumbelina and says to have Maya get interested in the book on her own and read it while the mom sleeps. Maya reads the book and gets shrunk and after desperately attempting to wake her mother up she goes to sleep herself. Immediately after this, a frog couple shows up and kidnaps Maya to make her their son’s bride. A gust of wind, the first deus ex machina of this movie, slams the window shut and Maya falls into the garden. A rat tries to attack her for being a human despite the fact she is smaller than him, and so she runs away right into our second deus ex machina, Angela the good witch. Angela explains Maya is in the land of her mother’s dreams and must go to the Land of South, find the Crystal Prince and only then will her mother wake up. She gets magical red shoes but she can only use their magic to help others. Of course, she immediately uses them for herself only to end up exactly where she started, which then dissolves into the land of sugar. So even though she used the shoes selfishly she still got further in her quest? Due to this movie being a heavy abridging of the anime, a lot gets left out and lost in translation.

In the sugar land she meets Noble, a little sugar fairy who can apparently shapeshift into a dragonfly. Then the wicked witch Cassandra finally shows up as Maya’s mother, only to be a trick. Immediately after escaping Cassandra our heroes run into the frogs again, with son Hoppy in tow. Deus ex machina number three as the family kitten stands over the book and scares off the frogs inside the book. This whole meta interaction never comes up again. A lot happens very quickly so skipping ahead: Noble dissolves into a pile of sugar, literally dying, only to be dried out by the sun later on, Hoppy turns out to be nice, convinces his parents not to force Maya to marry him, Noble dies a second time only to be alive again, and eventually Hoppy, Maya, Noble, and an extremely attractive Swallow get to the Land of South. A lot happens in the middle there, and it feels like they used five seconds of random episodes like when the magical pixies show up. 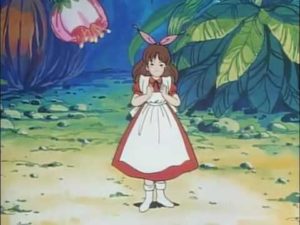 Before getting to the climax, I have to mention the songs. Every so often throughout the movie, a random chorus would begin singing about whatever events were happening. The highlight of this to me was when Hoppy and Maya ran into a snake. The opening line of the song goes, “It’s a snake! It’s a snake! It’s real, it’s not a fake!” I have never laughed so hard at how absolutely bad a song in a movie is, but this movie’s soundtrack is legendary in how bad the songs get, even by cheaply dubbed 1993 standards.

Now Back to the Plot 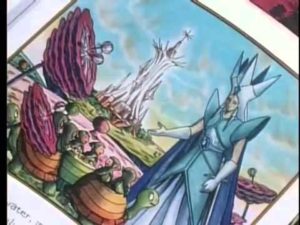 In the Land of South it is revealed after several more deus ex machinas such as the Crystal Prince’s shadow being sentient, that Cassandra and Angela were both working together to teach Maya lessons about being responsible, having good manners, and always being pleasant to be around. Maya goes home and her mother wakes up, noticing how much nicer Maya now is. Together they return the book to the “kind” witch at the edge of town, and that’s it. 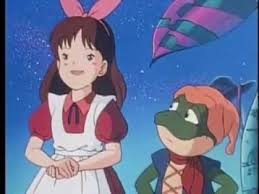 I think my thoughts on this movie are best summed up by a quote from Hoppy: “What’s going on and what does it mean?” Due to being cut from a 26 episode anime, so much is missing, and some of the cuts are so bad. The music will instantly change from calm to in the middle of an intense, fast paced number. The tone of this movie is all over the place, and so much happens with absolutely no consequences. I would love to see what else happened in the show because this movie’s world makes so little sense. Most importantly, how many times does Noble die in the show! Already in only 80 minutes he is presumed dead twice! Did this happen every episode? Every other episode? How many episodes at a time was he presumed dead? There is so much that I want to know and so much that makes absolutely no sense about this movie, but my biggest gripe of all is that it’s not even about Thumbelina! Maya gets sucked into the book, but at no point in the movie is she called Thumbelina. She’s still Maya the entire time. What kind of Thumbelina movie isn’t even about Thumbelina! I enjoyed this movie, partially due to how absolutely absurd it was, and if you find it cheap, go ahead and pick it up. Just whatever you do, don’t read the back of the box. Whoever wrote it didn’t even watch the movie as instead of the “land of dreams,” the movie apparently takes place in the “unknown country of wonderland” following the story of Mia. Look, I’d understand that on the VHS release in 1993, but this was 13 years later! Why even buy the rights if you never even saw the movie. All that said, this weird little thing was definitely worth a Goodwill grab.