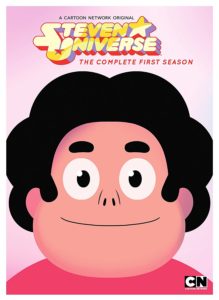 “Steven Universe: The Complete First Season” is the highly anticipated first major U.S. DVD release for Steven Universe. This three-disc collection features every episode of Season 1 of the show (alongside a couple of episodes usually placed in Season 2) in a beautiful presentation with some additional cool special features on the third disc. It’s a really well put-together collection, despite the lack of a Blu-ray version or commentary tracks (to be clear: there are none) like Cartoon Network was initially advertising.

You probably aren’t buying this DVD to re-watch or to show Season 1 to friends with, since it isn’t in HD. Having no Blu-ray option available is a little baffling, but somewhat par for the course with a lot of animated shows unfortunately. The episodes still play beautifully though; they look great and have great sound. There are subtitles available for every episode. 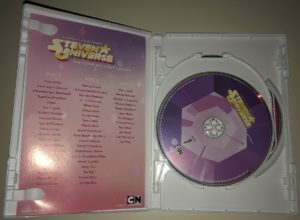 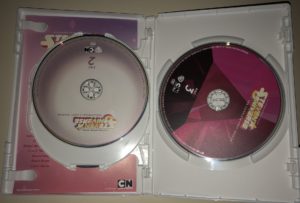 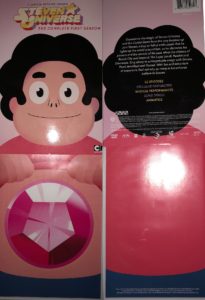 The presentation of the DVD is a major highlight, following up on the style Cartoon Network has previously used for its DVD releases of Adventure Time. The outside box features what seems like a weird choice of Steven’s face, but when stacked on top of the front of the inside box, which depicts Steven holding up his shirt to reveal his gem, the pair create a two-part image. Same with the back of the box: the outside back is the back of Steven’s head, and the inside back is the back of his shirt. This presentation is very cool and I love the image of his gem in particular. The discs themselves are also very pretty and the inside card lists all the episodes with another image of the Rose Quartz gem on the back of it.

The menus are minimalistic but beautiful. The main menu is particularly great, featuring an image of the statue hand from the credits with the instrumental version of “Love Like You” playing. The other menus are also nice looking and have tracks from show’s score.

Let’s get to what will be the biggest thing for many: special features. Once you can get past the lack of commentaries, I do think that overall the features are good. There are five total: I love two of them, found two others to be good, and one was a dud.

It’s hard to call this DVD anything close to a must-buy without a Blu-ray option or commentary tracks, but it’s still a really solid product that’s great to look at. It’s a good addition to any SU fan’s collection and hopefully the first of many Steven Universe DVDs to come.

“Steven Universe: The Complete First Season” is out January 30th.