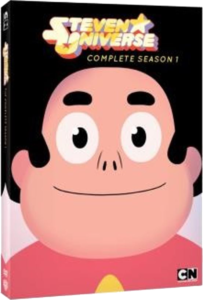 Fans can revisit the adventures of Steven Universe, Cartoon Network’s Emmy nominated and critically acclaimed animated series when Steven Universe: The Complete First Season DVD arrives on January 30, 2018. Featuring all 52 captivating episodes and the first time a full season has been available on DVD, relive the episodes that ignited a fierce and dedicated fandom.

Steven Universe is set in Beach City on the American East Coast, where the four Crystal Gems live in an ancient beachside temple, protecting the world from evil. As immortal alien warriors, they project female humanoid forms from magical gems that are the core of their being. The Crystal Gems are Garnet, Amethyst, Pearl and Steven, a young half-human, half-Gem boy who inherited the gem of his mother Rose Quartz, the former leader of the Crystal Gems. As Steven tries to figure out his powers, he spends his days with his human father Greg, his friend Connie or the other Gems, whether to help them save the world or just to hang out. He explores the abilities passed down to him by his mother, which include fusion – the ability of two Gems to temporarily merge their identities and bodies to form a distinct new personality.

As Cartoon Network’s most engaged property on social media, the empathetic and inclusive themes of Steven Universe resonate deeply with fans, garnering a massive following across a multitude of demographics. Receiving high acclaim from critics for its art, music, voice performances, storytelling and characterization, the series has been nominated for three Primetime Emmy Awards, five Annie Awards, a GLAAD Media Award, a Kids’ Choice Award and two Teen Choice Awards.