Adventure Time is the Animation Stalwart That Still Has It

Now in its 7th season, Adventure Time is an establishment. It has been on the air for five years now, and while quite a long time for a show of its kind, it is only slightly longer than other shows such as Gravity Falls. However, unlike any other show in the realm of children-oriented animation in America, Adventure Time has an incredibly expansive mythology and has spawned countless talented people in the field. It now functions as a version of The Simpsons for non-comedy adult oriented animation. 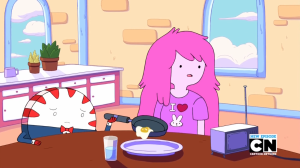 Long-running with many episodes (over 200 now!), countless characters, plot lines, talented crew members that have come and gone, the similarities between Adventure Time and The Simpsons are more prominent now than ever. One of the two key similarities to me is the expansive character cast, semi-recently showcased in almost full form in “Jake the Brick”. Both shows constantly shift their focus among a wide cast of minor characters, Adventure Time featuring more continuous plot lines for them however, also while staying less grounded in its main cast. The other key similarity is the breadth of talent that has come and gone on both shows, Rebecca Sugar most notable on Adventure Time, and The Simpsons of course running through more people with its much longer run.

Adventure Time now joins The Simpsons as such a stalwart in their animation realms. Both shows are always there, pumping out consistently high-quality episodes, even if they don’t reach the quality of each shows’ prime. Adventure Time differs through in that it is much fresher and is still of a quality close to its best episodes. Its 6th season was quite good and its 7th is off to a promising start, with an incredible-looking mini-series coming up.

However, the show simply has too many characters and plot lines to be truly great television. All of its many characters doing many different things makes for too divergent and unfocused storytelling. This broad and expansive mythology is appealing and can be good, but it’s a firm roadblock from making this show one of the best on TV, and it won’t be going away long-term.

Short-term however, this roadblock might be temporarily lifted for the next eight episodes which make up the upcoming Stakes mini-series, apparently only focusing on Marceline, Bubblegum, Finn, and Jake. With the show’s primarily overall storytelling flaw pushed aside, we could be in store for some of the show’s very best in quite a while.