I came into this film a huge fan of the director, Mamoru Hosoda, and so I had high expectations. In the past I ranked his film The Girl Who Leapt Through Time on my list of top ten animated films, and so when I heard he had a new film coming out this year I was extremely excited. Spoiler alert: I was not disappointed. Mirai is about four year old Kun who gets a new baby sister, the titular Mirai. As he is not the center of his parents life for the first time, he does not react well. This continues until he finds a different Mirai, a Mirai from the future. He finds his baby sister has come back from the future as a teenager because she needs his help, and then is when the film changes into something completely different.

The movie starts as just slice of life as we see the entire family adjust, and in the first act I actually found the parents’ story more interesting. The father is going to be staying home with the kids as the mother goes back to work, and this change in home life causes stress. Soon though, the layers of the film unfold, and it becomes the most magical movie I have seen all year. The first moment like this comes from an encounter between Kun and the family dog that leads to the scene in the trailer where Kun runs around with a tail and dog ears.

Although it may not appear so, the film takes place entirely at the family house and garden. The house itself is a thing of beauty, built in layers along a staircase. It’s both ordinary and extraordinary, almost being too real, like a stage play. The most important part of the house is the garden, as when Kun enters the garden, you know something special is going to happen. The first time that it happens is with the dog, then with Mirai, but after that the film goes beyond its initial conceit and really gets into its theme of family. The movie is all about family, the cyclical nature of it, and the role we all play in our families. Kun gets to see what his mom was like as a child, that she was quite unruly, and she is now telling him the same things that she did not want to hear. While on the subject of children, one thing I hate in movies is when they rely on spanking or other corporeal punishment to show a child being punished, but this movie avoids it at every turn. The parents are even shown to be questioning whether or not they were too rough, and that they aren’t happy to punish. I felt this topic was handled very well, and turned out nicely. 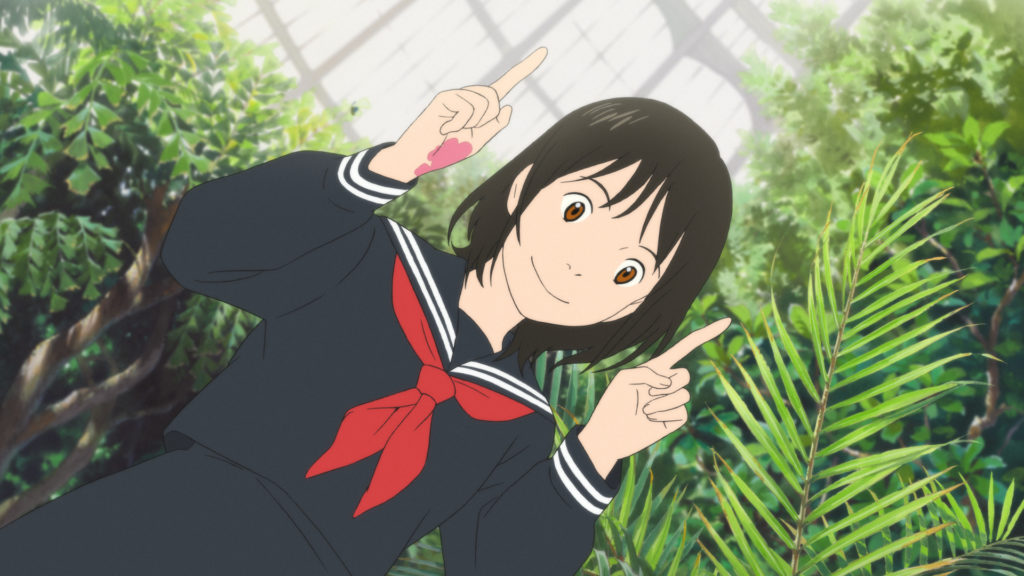 My absolute favorite part of this movie is the story of Kun’s great-grandfather. We first hear about him at the beginning of the film when the family has a get-together. To say more would spoil the film, but it was this part that finally made me cry. There is a scene towards the end where Kun and Mirai fall through the physical version of the family tree, and the effect is very similar to the time travel look of The Girl Who Leapt Through Time, and I mean that in the best way. This film was a joy to watch, and I look forward to seeing it again.

There is so much more about this movie I want to say, but mostly, I want everyone to see it. This movie moved me with its sense of whimsy, magic, and beauty. It was absolutely incredible to watch, and filled me with emotions I haven’t felt since, well since The Girl Who Leapt Through Time. Mirai is getting a limited release in the United States beginning November 29th and I highly encourage all of you to watch it. If you can’t get to a theater to see it then I hope you’re excited to see it the moment it’s out on DVD and digital. Honestly, do not miss this movie, it’s hard to fully explain why it’s amazing without spoiling it, take my word for it, you will like discovering the layers unfold. As a last word, if this movie does not get nominated for the best animated feature Oscar then you will see another article from me madly ranting.