“Come Along With Me” Spoiler Review: My Reactions to Adventure Time’s Series Finale 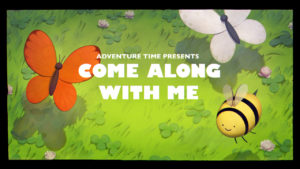 Adventure Time in its half-decade of airing on Cartoon Network has followed adventurers Finn and Jake through many quests, some more universe-threatening than others. And yet, Adventure Time would often take the time to dive deep into philosophical quandaries about relationships and life itself while always remembering that the true anchor we had in the Land of Ooo were the very human relationships that existed between these fantastical characters. The brotherly bond between Finn and Jake, the rediscovered intimate relationship of Marceline and Princess Bubblegum, and the sense of loss that ever increased in the connection between Ice King and Betty: the show always remembered to keep those feelings in the forefront.

This finale was tasked with keeping the emotional stakes intact just as several storylines needed to be wrapped up, and while I believe the plot of “Come Along With Me” was wrapped up perfectly in accordance with the motifs that Adventure Time has set up over its career, I admit I was initially a little dissatisfied with the backseat that most of the primary relationships seemed to take with the backdrop of the Gum War, followed up by the introduction of Golb moving to the main stage.

And yet, the finale does manage to be a perfect encapsulation of what Adventure Time as a full product is. The surrealism and animated experimentation of episodes like Orb or Food Chain reappears at various points, such as the nightmare sequence in the first half, as well as some moments with Golb’s creatures in the second half. Of course, when the show aims for emotional moments, it executes them well. The Marceline and Bubblegum heartfelt conversation, punctuated with a kiss, is going to deservedly get a lot of the highlight here, but the Simon and Betty interactions also wrap up their relationship just as tragically as it was introduced way back in “Holly Jolly Secrets”.

While tackling those heavier features, Adventure Time never lost its sense of fun, and it manages to sneak in some hilarious sidebars amidst the war, such as Lemongrab, who perhaps goes out with his strongest comedic performance of the entire series. And Finn, ever the mediator, continues down to the end to just wonder aloud why can’t everyone just live in peace and let life pass like a butterfly on the breeze. I was especially impressed by the simplicity of the message sent by Golb, who is set up in this finale as the embodiment of chaos and discord, being weakened by a simple song. Melody is the opposite of pandemonium, and that’s all the explanation that is needed.

There’s so much else going on in this finale that it took us over an hour and a half to break down in our podcast, although a lot of that time was dedicated to dissecting the fun tidbits provided in the ending montage that checks in with every main character (and a lot of popular side characters) post-series, to the tune of “Island Song”, which begins with the lyric, “Come along with me”. That song has played at the end of so many episodes that it was the only way to end the show overall.

It feels so bittersweet to say goodbye to this pillar of Western animation, but it’s time. The finale tackles the show’s most pressing hanging threads and goes about solving them in a way that is best described as quintessential Adventure Time, with a handy combination of whimsy and self-reflection. It’s just as satisfying of a finish to this journey as I could’ve hoped for.