On September 8th a certain show on Netflix that I was highly anticipating came out and we all know what show that is. When I went to my Netflix page, to my surprise there was another show in my mailbox waiting for me. Season 2 (which is really Season 1 Part 2) of a cartoon show called Spirit: Riding Free. The first 6 episodes dropped on Netflix last May and I checked them out because I was curious. I’d heard good things and it was okay… but nothing great.

Well episodes 7 to 13 came out on September 8th. Netflix of late has been splitting the seasons of some of their shows like the latest season of Voltron: Legendary Defender, and for that show it might have been okay considering that the series already had two seasons under its belt to build a fan base so people already knew the quality of it. Here with Spirit: Riding Free I think the split season might have hurt it because I wish we got to see the last couple of episodes when it first dropped, because they are super high quality especially the last two or three episodes.

I guess I should give you a quick recap of the series. It takes place in the settler days of the 1800’s. Our main character is a city girl named Lucky who moves to the frontier with her dad and aunt. In this new town she at first struggles to make friends, but meets a male horse named Spirit who becomes her first friend which inspires her to make human friends, mainly the town Sheriff’s daughter Pru and a quirky girl named Abigail. Personally Abigail might be my favorite. They have horses of their own: Pru’s horse is a female horse named Lucinda and Abigail’s horse is a male horse named Boomerang. And if you are wondering, the horses do not talk. Thank god, I hate when they do that especially if the humans are supposed to be the main characters. Having the audience understanding the horse’s speech while the main characters don’t creates a disconnect with the audience. Besides, the scenes when the animals communicate with each other are done very well. You get the jist of what they are saying. And they even make fun of it a couple of times, when Pru or Abigail pretend to be Spirit talking.

The setting is interesting. It is olden times though our main three girls’ clothing does seem very modern to me. The school is just one class, one teacher teaching all of the kids regardless of age. There are no grade in this show’s educational system.

Let’s talk about season 2 and how it improved the series. But before I do, let me talk about one addition that really didn’t do it for me. A male love interest for Lucky. He is just so bland and perfect. If you listened to our Little Witch Academia podcasts, on our first podcast our co-host Beatriz Mourad mentioned how when you add a male love interest to a female dominated series those characters can be very bland and generic. This character fits that mold perfectly. I am not the biggest Andrew Hanbridge fan in the world but even I can see how much more interesting Andrew is than this guy. Heck I take Rio Pochaco from Jem and the Holograms over this character and I hate the cartoon show version of Rio; at least he has a personality.

Another new character who I actually liked is Lucky’s cousin Julian, a con man like a Tom Sawyer. He is a dirtbag but at least he has a personality. And he is not a bad person, he is just a kid that likes to con people and is a bit of a sexist, but considering the time period this series takes place I guess I can forgive him for that. And we needed more non-villain antagonist characters besides town snob and the mayor’s daughter Maricela who I will get to later… boy I have a lot to say about her.

Anyway this season had more of an arc here: every episode connects better than in the previous season. One little subplot is Lucky’s dad secretly dating Lucky’s teacher Miss Flores. Lucky eventually finds out and boy do things get awkward.  Even before she started dating her dad, Lucky didn’t like Miss Flores for some reason, even though Miss Flores is a very kind person and she is fair. I never understood that, but as you can imagine this reveal does not help matters. Will that resolve itself somehow, well you need to see the series for yourself to find out. 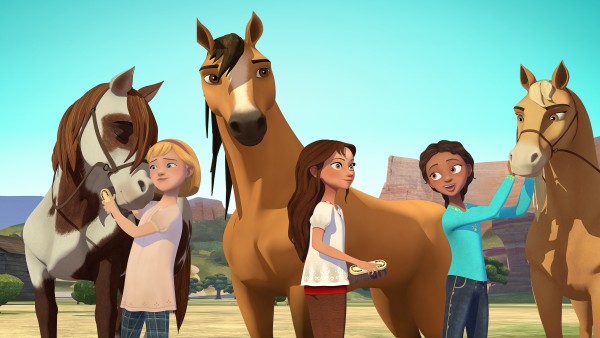 I also like the development that Lucky’s aunt Cora gets. Aunt Cora is a very strict parental figure and at times she was played kind of antagonistic in the first season, but in the second season they give her more to do and show the viewers that she does care about her family and is a good person. I personally loved her in the season 2 finale; I loved how they showcased how far she has come. And she is voiced by one of my favorite voice actresses in the world, the great Kari Wahlgreen.

The show started to really hit its stride after Lucky found out about her dad and Miss Flores; that was a turning point. I think the last 2 or 3 episodes are very excellent. Episode 5 was a Christmas episode and it was heart warming.

Though my favorite episode is probably Episode 6. It is a big Maricela episode, a character I have been waiting to get some focus and development and it delivered. It is the trope of the main character and the mean girl have to put aside their differences, and we learn a little bit more about the mean girl, and they bond. But what I liked is the ending. I thought at the end of the episode like on all other shows, we’d go back to status quo. But no they didn’t, it ends with… well you just have to see for yourself. I also liked how the last big conflict is resolved by Maricela being smart. Which is a bit inconsistent: a couple of episodes earlier Maricela was portrayed as not very bright, but she stepped up when it was really needed. Still if Lucky and Maricela are friends now, you’ve got to wonder what Pru is going to think because Pru and Maricela don’t get along at all. Can Lucky mend fences… we will see.

And then of course the season finale. Wow, just wow. I just thought it was going to be a typical episode. In this episode Lucky pretends to be a boy so she and Spirit can participate in a horse race. But that gets resolved about two thirds into the episode. The last third is about the aftermath and the devious thing done by the villain of the show and how he tares apart Lucky and Spirit. And the last scene: Lucky struggling to get Spirit as the train drags him out of town. Is this how the show ends? Well hopefully we will find out in Season 3.

Spirit Riding Free is on Netflix. If you want a fun little show about girls riding horses in the Old West, this is your show. I think the last few episodes paved the way for some potential of Season 3 of the show reaching new heights. I think this might be the second best female-centric cartoon show on Netflix this year. You all know the first, but that is another story that I have already told before.