I’m not a DC/Marvel comic book person and my interest in superheroes is lukewarm at best, but when season three of Young Justice was announced, I screamed. I was that girl that signed those dumb online petitions to bring Young Justice back when it was canceled, heck, I’m pretty sure I signed a petition that demanded Wally be brought back to life. Sure it’s a superhero show but it’s really so much more than that (except season 2 but I’ll get to that). So let’s talk season three! 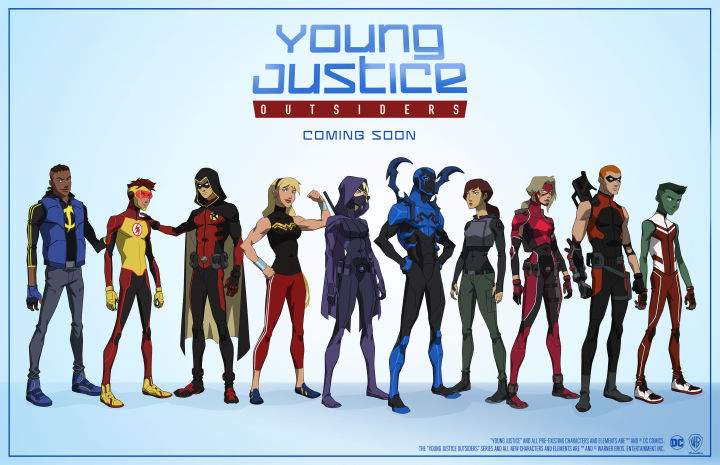 Character designs have been released and we have a good idea of who’s gonna be introduced and who’s coming back. Artemis, Nightwing, Superboy, Beast Boy, Arsenal, Static Shock, Bart as Kid Flash, Blue Beetle, Robin, and Wondergirl are all still around. Arrowette, Traci 13, and Spoiler are some new faces that I’m excited to meet. Black Lighting, who we’ve seen briefly before looks to be playing a bigger role now.

Most noticeable to me was who’s missing. Where the heck are Aqualad and Miss Martian? Maybe these characters will show up, but if they are the producers are playing it close to the vest. Though not pictured, it’s been implied that Wally is coming back. Maybe it’s just wishful on my part, but the fact that he didn’t “die” in season 2 but rather disappeared into the Speed Force has been confirmed. That’s all Greek to me but my boyfriend assures me that’s comic book for “he can come back easily.” So that’s crash.

Young Justice has been taken off Netflix and season 3 is going to be available on DC’s new online streaming service. I have mixed feelings about this. I’m glad the creators are going to have more freedom, I’m just gonna be pissy if I have to pay for another steaming service. I mean, I totally will because I’m desperate for more of my babies, and I understands shows aren’t made for free, but I’ll be grumpy about it.

With their new creative freedom I have high hopes for the show. Already, I feel Young Justice pushed the boundary of what’s allowed in a kids show, in a good way. They never shied away from some hard hitting topics, or even innuendos and it seems they’re not gonna stop now. The creators even said they’re planning on delving into some even darker and more mature themes. Give me some LGBT characters, maybe some hero guilt, home life issues, or have a member of the team really go off the rails and become a villain. I want to see some more Batfamily angst! Something that we really need is development for many of the new team members such as Tim Drake, Wondergirl, Beast Boy, and Static Shock. They were introduced in season two yet we still don’t even know them; they were totally glossed over.

Speaking of the failures of season two let’s talk about things I don’t want to see in the new season. Ok so to me what made Young Justice such a widely loved series was that even non superhero fans could watch and love it. Season one was more about the team. It was about teenagers who’ve seen too much to be regular kids but were still too green to run with the big boys. They needed to learn to work as a team, choose and accept leadership, try to balance romantic feelings with fellow team members, and deal with secrets and mistrust with those closest to them. It’s was a coming of age story first and superhero show second. Season two however was just too big for my tastes. Too big of a cast, too big of a plot, too much everything. There were so many plots being juggled, so many societies, so many people, and they pulled it off but the character development greatly suffered. It’s excellently done as a super hero show it just wasn’t the same as season one. There’s enough of the original heart to keep me watching but ultimately they almost feel like different shows. This was a long drawn out way of saying I really hope the new season keeps that heart. Keeps the foundation that made it so popular and relatable to so many kids. I want a coming of age story with kids that happen to fight crime not the other way around.

I’m happy though, a beloved animated show that’s been over for years has come back to life and with the same voice actors to boot. I feel slightly accomplished and proud of my fandom, rarely does a canceled show come back from the dead. I’m not totally 100% sure it was us that did that but I’m sure we’ll be happy to take some of the credit for it.