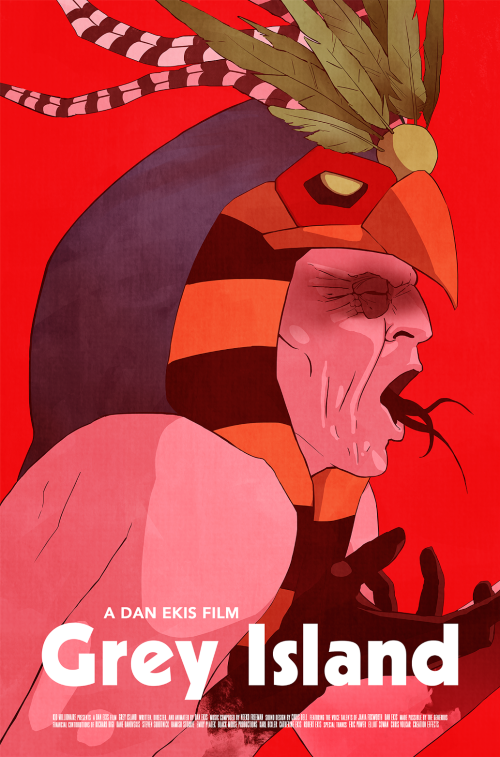 I’ll be frank: avant-garde animation is definitely an acquired taste, and one that I have yet to develop as a fan of mainstream animation. However, many great animators come from humble beginnings, sometimes having to fight to get their work funded and out in the open for concepts that would probably never make it as mainstream ideas, but serve as stepping stones for the animator to get their foot in the industry.

With all that in mind, I decided to give Dan Ekis’ Grey Island a watch. Ekis is an animator out of Edinboro University in Pennsylvania who is currently heading Kid Millionaire, an independent animation studio that is aiming to break into feature films and web series. Grey Island is the studio’s first feature, although Ekis says he wrote and animated the film all by himself over the course of two years with an infinitesimal budget.

Grey Island is a high-concept sci-fi film portrayed through a minimalist animation style, so it definitely takes some time to get accustomed to. The opening sequence is beautiful to watch, although you understand nothing of what’s actually being portrayed. The movie also uses a text intro which makes some sense after watching the entire movie, but fails to serve as an actual introduction, which is usually the purpose of such a text presentation in sci-fi movie intros; you’re just thrown into the story here, and that may be your prerogative in the first place.

The story actually (sort of) begins about four minutes in when we see the main character, for the longest time identified only as a nondescript woman in blue, walking through the city and making contact with a robot bunny, who is by far the best character of the film, if only for him being a rabbit in a world of humans and fantasy creatures, as well as a semblance of a relationship he develops with the protagonist. Immediately as the movie starts, a pure black-colored shapeshifter, with a design reminiscent of Samurai Jack‘s Aku, appears out of an elevator. The look works well as both are meant to come off as embodiments of evil. The villain’s henchmen begin laying waste as the woman and her bunny friend fight through the city in a quick and chaotic scene.

Perhaps the action would make a little more sense if the decision wasn’t made to use almost no dialogue in the entire film. We all have different tastes, but it’s very hard to reconcile a film that’s dealing with high themes like Egyptian imagery and chronic illness and the general future dystopian setting without using any conversation to really get us to understand what even is going on. Because of the at-times baffling story, the reason for caring about the ending, aside from “stop people from dying” or “stop evil from winning”, only comes about halfway through when the protagonist’s coworker is affected by the evil being, as only then is there really a personal reason behind her fight.

Of course, if you’re going to do a silent film, you better have sound and music down pat, and the music definitely comes through. Neeko Freeman, the credited composer of the feature, is key in helping you at least get a sense of the atmosphere the filmmaker is trying to construct. Sound is also well-done, especially in shots that take place indoors, giving the setting a Star Wars vibe with closing doors and other usual sci-fi noises.

Also, there’s definitely a sense of a story here that could have a lot of depth, perhaps more suited for an Adult Swim-style series as opposed to an avant-garde silent short feature. Ekis tries to put focus on an Egyptian-styled “Shaman” character being controlled (or the controller?) of the evil Aku-styled figure behind him, but not much is added by his interesting design to the story. Similarly, giving the female protagonist a name and a flashback to her family helps to give you some interest in her background, but providing it in the last 15 minutes of the film feels too little, too late.

Despite some of these things, there are elements of this project, particularly its ability to create an atmosphere of dread using a combination of well-composed music and at times purposefully disturbing visuals, that should be applauded. Also, the hints of character moments we get between the protagonist and her rabbit sidekick are notable enough for you to want them to be developed more if this concept was ever built further upon. For a creation of this length animated by a lone hand, it’s an impressive piece of visual media for sure, and it’ll be interesting to see how the style develops over the course of Ekis’ future endeavors.

If you would like to give this a look, the film is available for purchase directly from Kid Millionaire’s website.