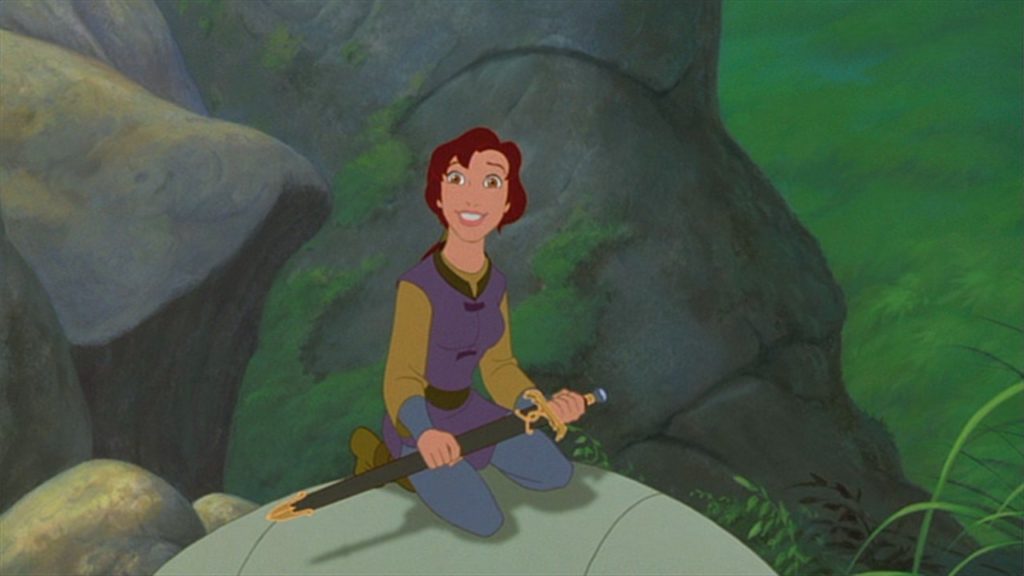 Quest for Camelot is an odd little film, as most animated non-Disney films from the late 90s tend to be. It holds a special place in my heart because it’s about a girl who dreams of becoming becoming a knight and saving Camelot, and that’s right up my alley. Even I can admit however that the movie is flawed, it may not even be a “good” movie, but I still love it.

The premise is promising enough, spunky young woman Kayley goes on an adventure to find the missing sword Excalibur and return it to King Arthur. This sounds like a fun story, but the execution was less than ideal.

For example, the antagonist is weak. Animated kids movies aren’t always known for their complex, three dimensional baddies but still, the villain in Quest for Camelot is so one note that I literally forget about him every time I watch the movie. I rewatched it recently and had the thought “oh that’s right, you’re a character that exists”. This guy’s whole motivation for being bad is he finds peace boring and war exciting, that’s literally it, and he says so via song.

Fun fact, Quest for Camelot featured a wacky rooster side kick long before Moana. And speaking of wacky comic relief side characters, this movie has way too many of them. Most memorable is the two headed dragon, or more accurately, the two dragons stuck together in one body. They can’t breathe fire or fly but they can make weirdly modern and out of place pop culture references. They’re supposed to be the main comic relief but even as a kid I mostly just found them annoying. Then we have the rooster, various other farm animals, and a snarky griffin to add to the mix. Like I said, way too many sidekicks.

One thing that makes this movie unique to me though is its portrayal of a capable, strong, disabled character. Garrett, one of the few well rounded characters in this movie, is a blind hermit that helps our protagonist survive the menacing forest and find the sword. As a disabled kid myself this character meant the world to me. Without Garrett, Kaylee would have died in the woods and never even finished her quest.

Despite all its flaws I still love Quest for Camelot for what it tried to do. A female knight, a blind warrior, a spin on Arthurian legend, were all great concepts that I appreciate even if the final product couldn’t quite make it past mediocrity. It’s still a sweet, lighthearted movie to pop in when you’re sick or randomly want a dose of 90s animated nostalgia.