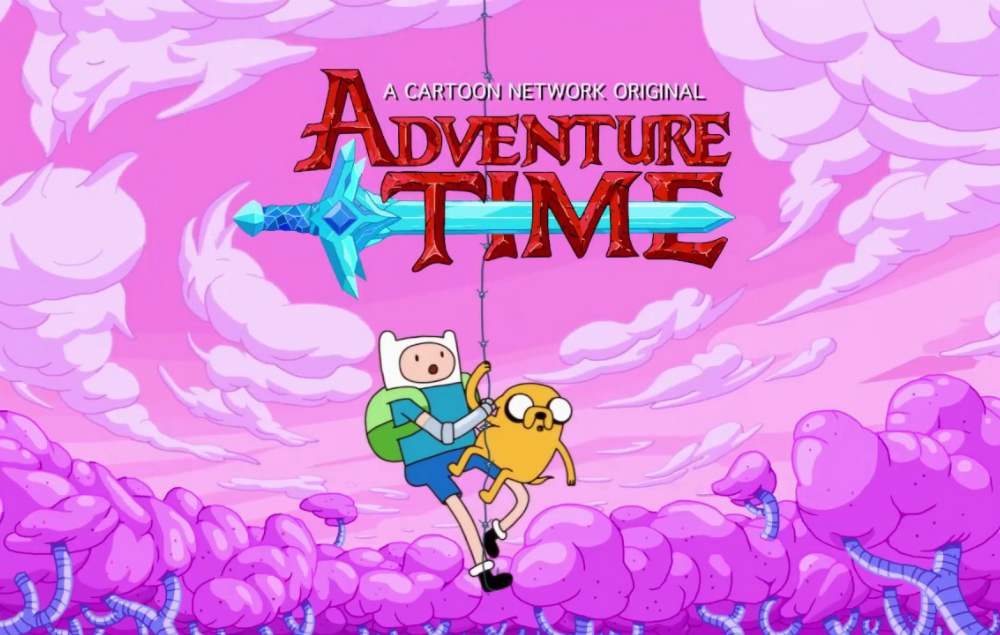 Adventure Time has now struck gold three times out of three with their miniseries approach, this time concluding their “Elements” miniseries with some great character interactions and a culmination of lore hints that the show has been cultivating since “Evergreen” in Season 6. Even more so, the miniseries has left the show with many changes, huge and small, that gave the show various potential directions to take for the remainder of this season and the final season. Even if the show has already wrapped up writing and the finale is set in stone, it’s useful to speculate on where we’re headed to get a better idea of just how much this show has progressed its mythology and its characters since starting off as the wacky show about a kid and his dog back in 2010. So, let’s take a look at some of the hanging threads this miniseries has left us to ruminate on.

Jake: Going Back To His Roots 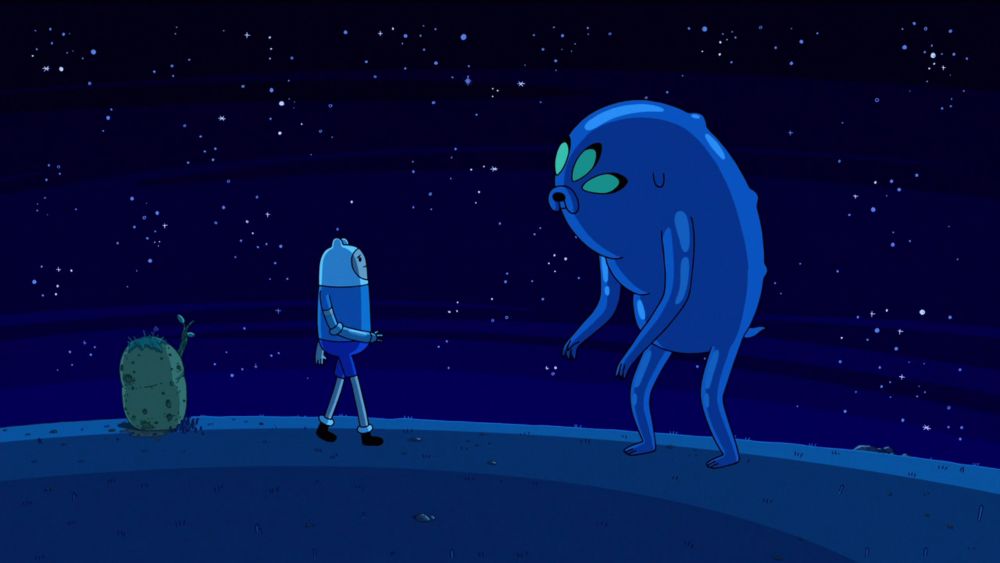 Yeah… too late to say spoilers? So this image shocked the majority of people who were watching this miniseries because of how long we’ve gotten used to the yellow-orange ball of magic that Jake has embodied for the entire series. However, this isn’t entirely out of nowhere for the show. Of course, he now resembles the unnamed shape-shifting creature that infected Joshua with the embryo that eventually became Jake. So it makes some sense that the final lump wave, which returned everyone to their basic forms, made Jake go back to the first DNA he ever had. Also, this creature did make a cameo appearance in the “Elements” prequel episode “Orb”, perhaps meant to be a foreshadowing of what awaited Jake in the future.

Also, he and Finn have always shown some aversion to how Jake got his magic powers in the first place (as far back as the Season 1 episode “The Witch’s Garden”, Jake put very little effort into remembering his first encounters with shapeshifting). So this provides an opportunity for Jake to explore his true self, and maybe appreciate the power that creature vested upon him more. In the shapeshifter’s “Orb” cameo, he appeared while Jake was struggling with imagery of rapid aging, so it’s yet to be seen if there’s a connection between his aging arc and this new form. Of course, there are also the obvious questions of how Lady Rainicorn and the rest of the Candy Kingdom will react to Jake’s new monstrous form. Rainicorn and her children inherited some of Jake’s DNA, so his abilities may not make much of a dent in their perception of him as long as his personality is unharmed by the transformation (another detail that we may need to pay attention to). However, the candy citizens are known to scare easily, so whether or not they continue to accept him as a protector of their kingdom is not set in stone with this community. 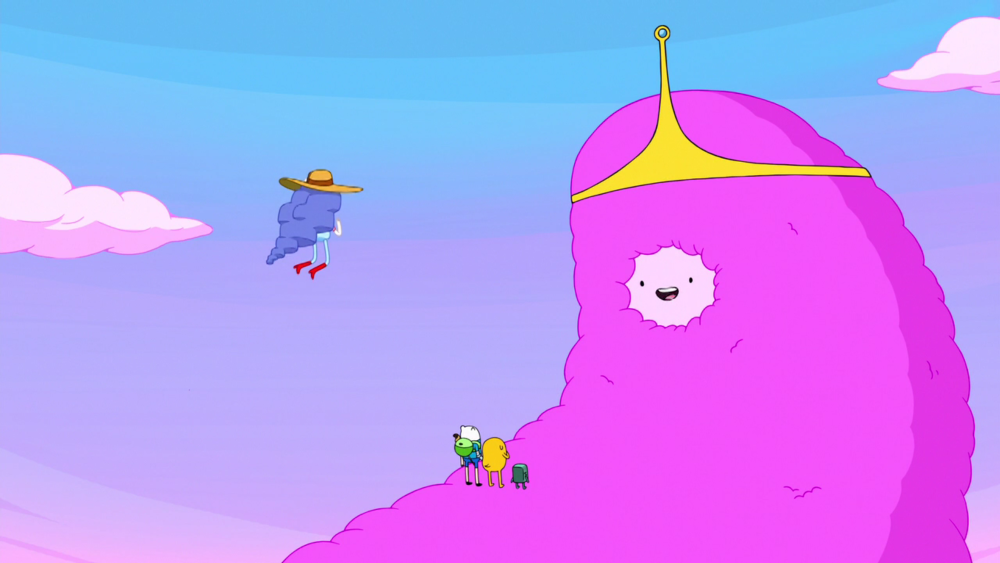 Bubblegum doesn’t undergo a huge change in the immediate ending of the miniseries, as she returns to her bubblegummy self while being rescued mid-fall by The Vampire Queen (as Bubbline supporters squeed across the world). However, the show may opt to have her deal with her psychological state once she figures out what she did as a Candy Elemental on steroids. Throughout the series, Bubblegum has had an obsession with keeping her subjects safe and happy, to the point where she turned the Candy Kingdom into a surveillance state. Episodes such as Season 6’s “The Cooler” and “The Pajama War” hinted at Bubblegum realizing the inherent moral issues with holding so much control over a population. Unfortunately, once she lost control of her kingdom to the King of Ooo and saw how quickly the kingdom decayed without her guidance, it appears her idea of control came back to the forefront.

More recently, in “Jelly Beans Have Power”, upon discovering she had a supernatural power heretofore untapped, she wanted to use it to keep her people from experiencing despair, and that’s always been at the heart of Bubblegum’s motivations. So it makes sense that when devolved to her basic instincts as a super-Elemental, she decides to literally turn her subjects in the essence of candy: anti-depressant energy banks of eternal joy, without regard to the changes in personality or change of lifestyle that this entailed. We can also assume that the Candy Kingdom had no say in the matter, and that while others may have felt like BMO and accepted the transformation, other more experienced citizens, such as Starchy perhaps, would have put up a fight if there was a forum available to them.

So now that the kingdom and the Princess have gone back to normal, the Princess will have to deal with what direction to take the Kingdom. Will she return to the laidback governing style she was experimenting with in the final days of her first term? Or will she go back to burying herself in her scientific work, as she showed a tendency to do in earlier seasons when faced with personal stress? We also have the benefit of knowing bits and pieces of Ooo’s future from flash-forwards shown in “Lemonhope Part 2” and “Graybles 1000+”, in which the Candy Kingdom is portrayed both as an armored city of sorts, and as a gigantic version of what we know as the Gumball Guardians protecting hibernating Candy Kingdom citizens. So, if we are to believe that Bubblegum is at the helm for eternity, those seem to foreshadow an even greater return to overbearing rule than some may fear. So seeing which direction Candy Kingdom politics takes under Bubblegum’s post-”Elements” reign is something that the show could go into further detail. 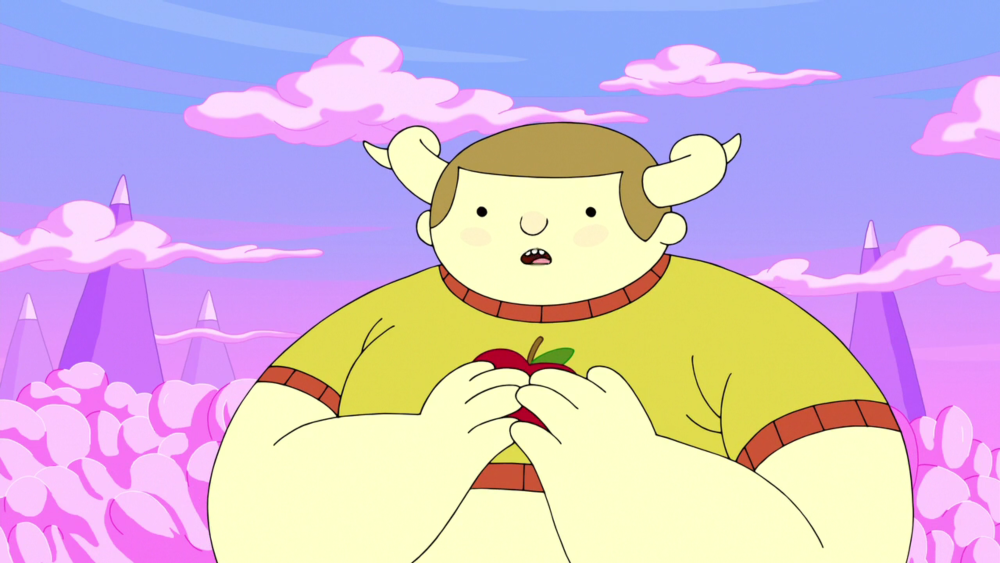 Sweet P had a minor role in the miniseries’ first episode, “Skyhooks”, where he feels creeped out (with justification) at his newly pie-faced mother Tree Trunks. However, the real moment for this character came in the final lump wave, which caused him to grow out his horn fully. For those who have forgotten, Sweet P is the fleshed-out (literally speaking) version of the Lich, the embodiment of evil that Finn and Jake had to battle in several season finales. The Lich has been for the most part dormant in Sweet P’s state, with the exception of “Gold Stars”, where we saw that the Lich’s desire to extinguish life has not diminished.

The majority of closeups on character details such as this end up foreshadowing a change in the character, and it’s been theorized for a long time that the Lich would make a comeback. With this influence of lumps reverting some beings farther back than we expected, it seems to no longer be a question of if, but when the Lich will break free from this fleshy realm. Furthermore, with the Enchiridion back in play, the Lich once again has a target to enact multidimensional mayhem.

(One detail I don’t want to leave behind: The theory that the Lich will return is supported further by what many perceived to be a form of foreshadowing in “Orb”, where a MO dressed as the Lich feeds Finn and Jake their lines for a play of BMO’s creation. Some believe this could be a sign that the Lich, known as the personification of nightmare fuel, was the cause of the shattered dreamscape the three had to experience. However, the reason behind his appearance, or what role that nightmare liquid presented at the end of the episode, are both unclear, and may come to the forefront if we indeed follow a new Lich storyline). 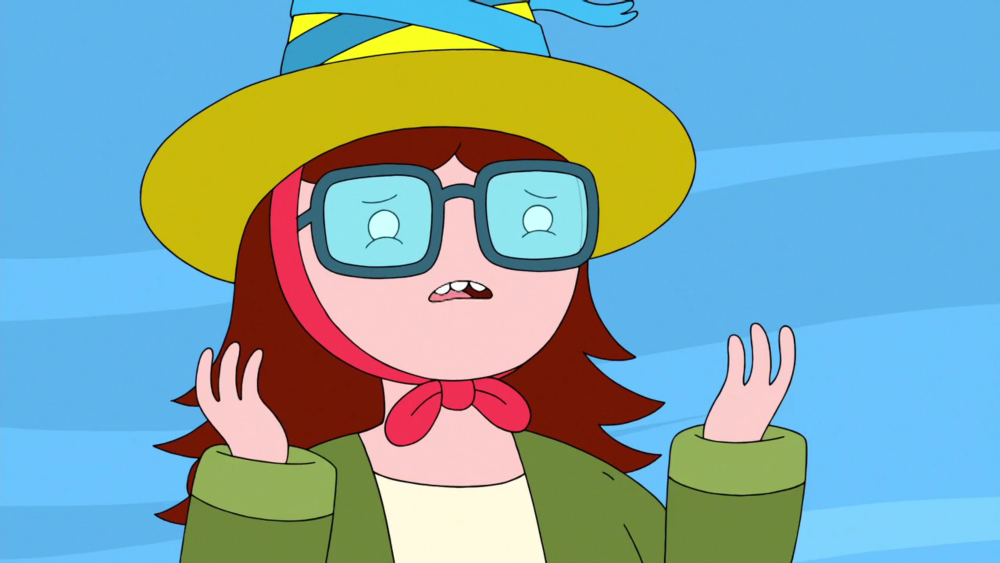 A huge focus of “Elements” was Betty’s continuing efforts to bring Simon back from his deranged state as the Ice King, and the conflict in accepting that Simon is long gone. However, by the end we see that Betty is incapable of accepting this, and goes as far as messing with the Enchiridion. This is such a distressing act that we even get a shot of Prismo and the Cosmic Owl agape at what was happening. This may let us know that her actions have farther-reaching effects than we currently know about.

Another key moment is the final shot we have of Betty: she finds herself suddenly on Mars in front of its new ruler, Magic Man! Well, now he’s Normal Man, but I for one was pleased to see one of my favorite characters, who had been away for quite a while. In any case, Normal Man seems to have settled down, and may be able to impart much-needed advice to Betty, who is still struggling to handle the madness and sadness that comes with being a magic being in this universe. Let us not forget that Magic Man also took the loss of a loved one terribly. I am really excited to see more interaction between these two, which we last saw memorably in “You Forgot Your Floaties,” where the Magic Man-Margles relationship was exposed.

Adventure Time: Don’t Watch It For the Plot 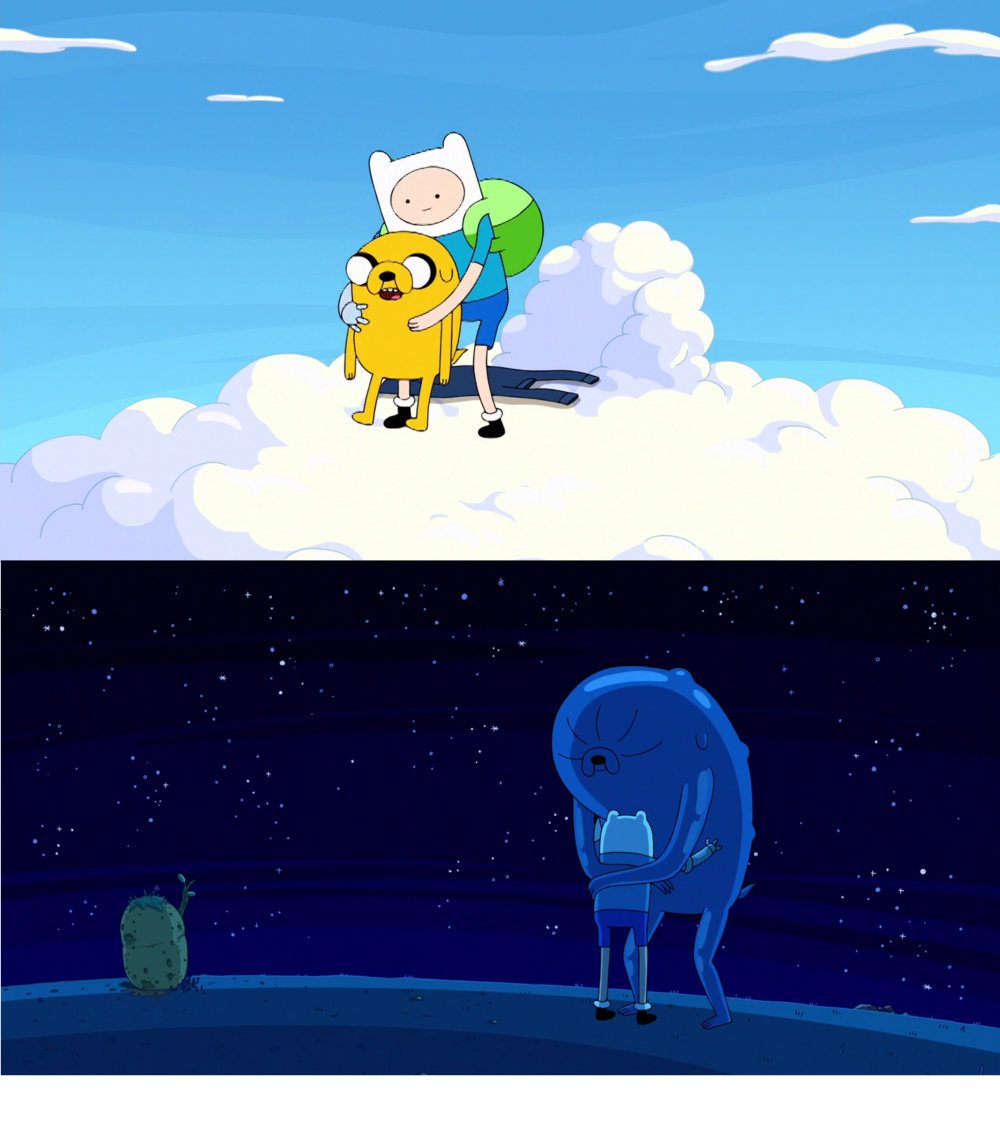 Adventure Time has been on for so long that some fans, who have been spoiled by the outpouring of plot-related episodes since season 6, may have lost track of what really made the show special from the very beginning: the relationship between our two protagonists, Finn and Jake. We were introduced to this wacky world of Ooo through their eyes, as they gave each other advice to get through sticky situations and were there for each other during their emotional low points. This was stressed in “Cloudy”, which was an abrupt breather episode to some viewers. To me, that episode was quintessential Adventure Time, just two life-long friends shooting the breeze and calming each other down. Of course, both of them have gone through so much, which explains why the conversation feels more nuanced than the exchanges we got in the first couple of seasons in the show. Jake expressing his anxieties about his family and his efforts to put on a cool veneer for Finn, and Finn in turn sharing his guilt over not being in Ooo when the Elemental spell took place, all in a classic barber shop scenario, serves to remind Adventure Time fans that this is the real foundation of the show.

Of course, we’re excited to see these plot threads and others (Finn’s relationship to Flame Princess, Prismo and Cosmic Owl’s boss, maybe Huntress Wizard? I can dream) progress to a finality, and with good reason. Adventure Time has put a lot of focus into developing its mythology in the last three seasons, and you would hope the writers have done this to make its final season a bomb of fulfillment. But let’s not lose sight of the fact that Finn and Jake embody the chillest bromance in animation, and that seeing these two interact will continue to be the highlight of many animation fans’ nights, at least for one more year.