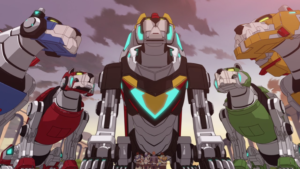 If I had to describe Voltron: Legendary Defender in two words, I would say “satisfyingly tropey”. That second one isn’t even a real word but it’s the best way to describe the main aspect of this new Voltron’s plot: everything about it is typical and treaded-upon. There’s nothing revolutionary here and everything feels familiar. But it’s done in a way that’s satisfying, and that’s very rare for a show that constantly follows tropes (typical story elements).

A similar way of saying this is that the show’s story is satisfyingly simple, but it lacks the depth that would make the show truly spectacular. Most of the characters are characterized well enough, but there was nothing very defining about any of them (maybe except Pidge). The season’s plot was the same, competent but uneventful.

On the other hand, the show’s animation and production values in general are off the charts. Voltron: Legendary Defender has the best animation we’ve seen in America since Legend of Korra went off the air and it’s not close. Combined with incredible sound design and a great score, Voltron feels great to watch. 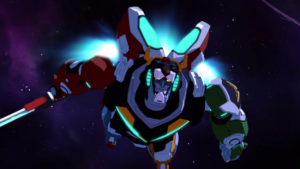 Even if the show’s plot is unexciting, its best aspect is how it always does quickly what it needs to do. If an episode leaves an element of a character hanging, or if all the characters get a power-up but one, the thread left open is usually addressed the very next episode. It creates a dynamic where you’re not left unsatisfied with any element of the show for long (especially if you’re binge-watching it).

Overall, this first season of Voltron is extremely competent and fun to watch. To a certain extent, that’s enough. The show is good right away and actually slightly improves the rest of the season. It lacks a depth of character, a depth of plot, and even the absolutely stunning fight sequences that would be necessary to make this show truly great, but that doesn’t take away from the quality levels reached by this first season, which were some of the highest for animation on television right now.

(My grading scale explained: 5 is an average episode of television, 10 is the best episode of TV ever. a 9.5 and above is truly excellent.)