Breaking Down Old AT References in “Come Along With Me”

“Come Along With Me”, serving as the final bang for Adventure Time to go out on, packed in dozens of references from past episodes as a gift to its fans. Here are just some of the things I was able to pick out, although in 44 minutes there was space for a lot of stuff to pass me by. 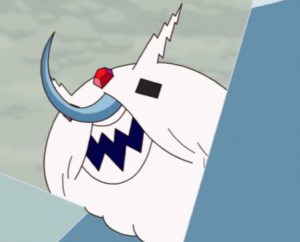 We are re-introduced to Ice Thing in the beginning of this finale’s special intro sequence. The Ice Thing has previously made appearances in “Graybles 1000+” and “Temple of Mars”, and doesn’t change too much in this appearance, looking like a sentient representation of the crown separate from Simon, and notable in that his laugh sounds much deeper than our Ice King’s Tom Kenny-provided chuckles. Later in the finale, it’s shown that Gunther (despite Jake’s mention of his status as Orgalorg) wishes to become a version of what will probably become the Ice Thing.

The Prizeball Guardians from Graybles 1000+ make a reappearance here, wandering the landscape. Shermy and Beth live in Marceline’s house, perhaps serving as an explanation for hearing music coming from that structure in Graybles 1000+. We also see in the background of the intro sequence the Candy City spotted in Lemonhope’s epilogue, which ends up meaning that epilogue and Graybles 1000+ take place in a similar time period.

Sweet P In The Future

In the intro Shermy and Beth are riding a large giant with twisted horns similar to those worn by our Sweet P, who also gets an appearance in the ending montage graduating from kindergarten. Future Sweet P is also spotted with a giant Night Sword, first introduced as a gift from Hunson Abadeer to Finn in “Marcy and Hunson”. It’s also worth mentioning here that Beth names the mountain BMO lives on as Mount Cragdor, which makes it the same mountain featured in “The Enchiridion!”, which also had a giant wandering its thereabouts. 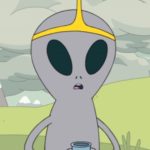 Princess Zip is introduced as a friend of Shermy and Beth in the far-off future. Her design resembles the aliens introduced in “High Strangeness”, where it was revealed Tree Trunks had hybrid children with an alien race. At the end of this finale, Tree Trunks is also spotted among crop circles offering a pie skyward, presumably to those same aliens. 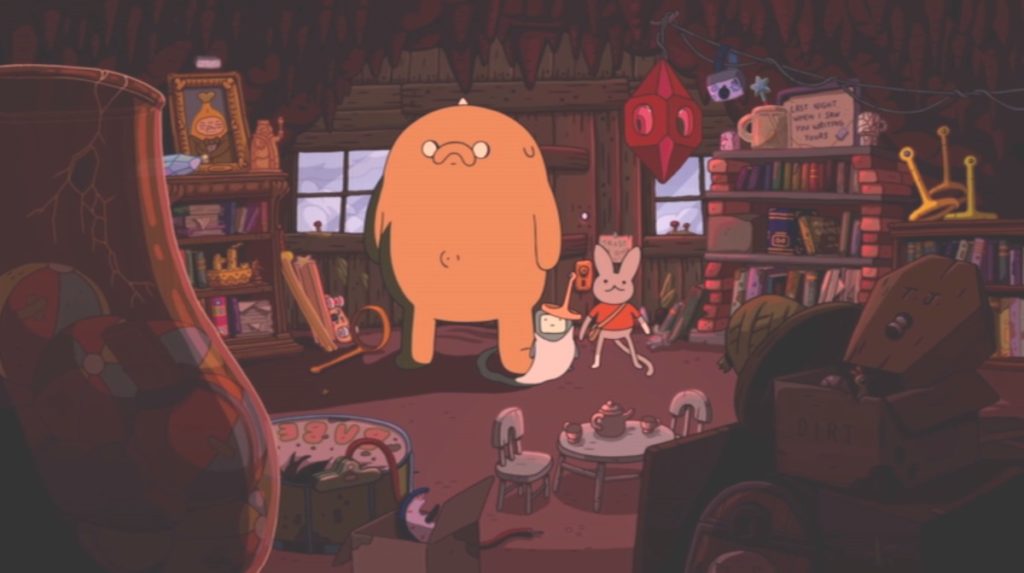 This first BMO scene is chock full of references to characters and stories long gone in Adventure Time lore. Just some things that stood out to me included Grob Gob Glob Grod’s helmet, a King of Ooo figurine, Ice King’s drum, Melissa’s SXY-LUMP license plate from “Trouble in Lumpy Space”, a leftover sign from “Shh!”, Marceline’s “no smoking” shirt and a hollowed out A-MO. There’s probably even more obscure references you can dig out, given how packed this room looks. 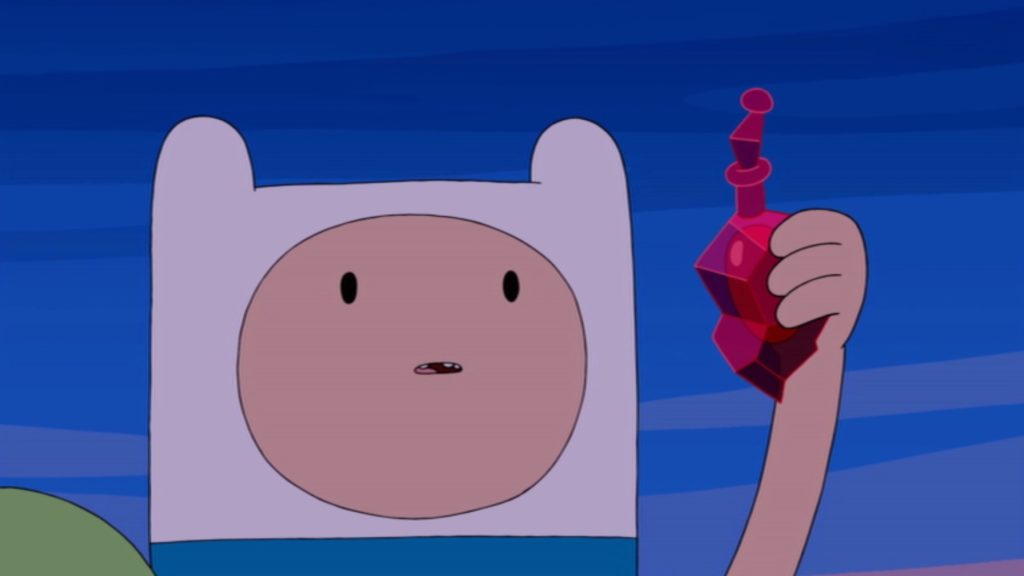 “Orb” was a confounding episode even at the time, but even then it was obvious that the resolution of earning a mysterious liquid was going to come back at some point, and it does here, as Finn pulls out the juice to knock everyone out and push them into the dreamscape in the hopes that the army leaders can come to their senses there. The dreamscape itself is similar to the one shown in “Orb” by way of the many eyeballs visible in the walls and skies. 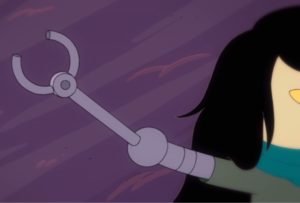 As Finn makes a final plea before having to resort to the nightmare juice, he tells Bubblegum that they’ve known each other for a long time, and Bubblegum imagines Finn as his past self Shoko, as was explored back in “The Vault”. Bubblegum and Shoko had also developed a friendship, so it’s a nice callback to Bubblegum’s long life in that sense. 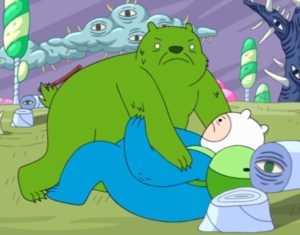 At one point, Fern and Finn are battling as bears. The imagery chosen here harkens back to “In Your Footsteps”, where Finn was struggling with a bear who was taking Finn’s identity as his own, a related conundrum to the one Fern has faced since his creation.

The song that inspired the finale’s title begins “Come along with me, with the butterflies and bees.” Butterflies are a common Adventure Time motif, to the point that in “The Vault” it was explained that one of Finn’s past lives had been as a butterfly. This shows up most obviously in the finale when Finn imagines himself as a butterfly in his peaceful counter to Fern’s chaotic bat form. A butterfly is also spotted in the first shot of Shermy and Beth, as well as the first shot of the Gum War storytelling. 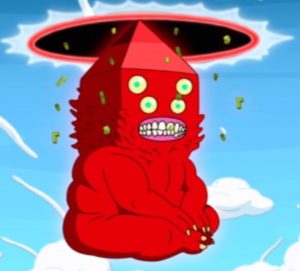 GOLB had been rumored to be a candidate for a series finale villain for the longest time. GOLB first appeared in “Puhoy”, as Finn bounced off him back to the real world. In later Magic Man episodes, he is described as one of the highest deities, to the point that Prismo was unable to fulfill a wish that involved him. However, this finale ends up providing the most information we’ve ever possessed about GOLB, such as him being representative of chaos. 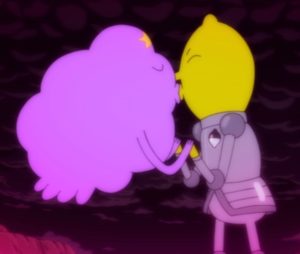 Obviously Bubbline is the big ticket ship to be represented in this finale, and would need an entire article to break down its roots, but Lumpy Space Princess and Lemongrab’s kiss in this finale was not entirely out of nowhere. In “Normal Man”, we get a brief look at the two of them having a picnic date, and Lumpy Space Princess mentions that she saw Lemongrab’s online dating profile. 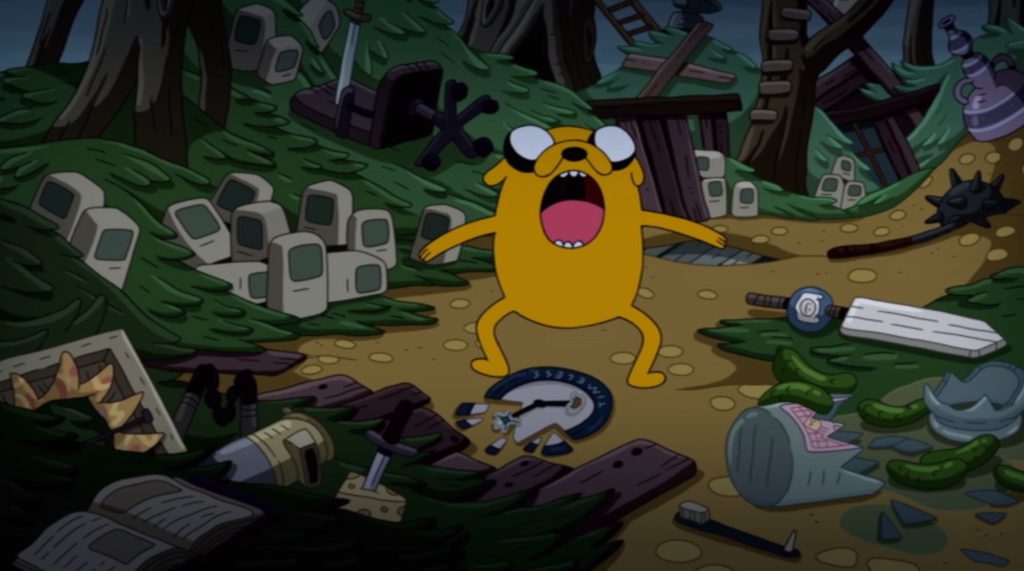 We’ve spent over 200 episodes with the treehouse, so to finally see it entirely destroyed is quite the shock. You can spot a couple of artifacts from previous episodes among the ruins, such as the fake Finn Sword created by Jake in the wake of the events of “I Am a Sword”, as well as the Villagers from “The Visitor” that Finn and Jake took in. 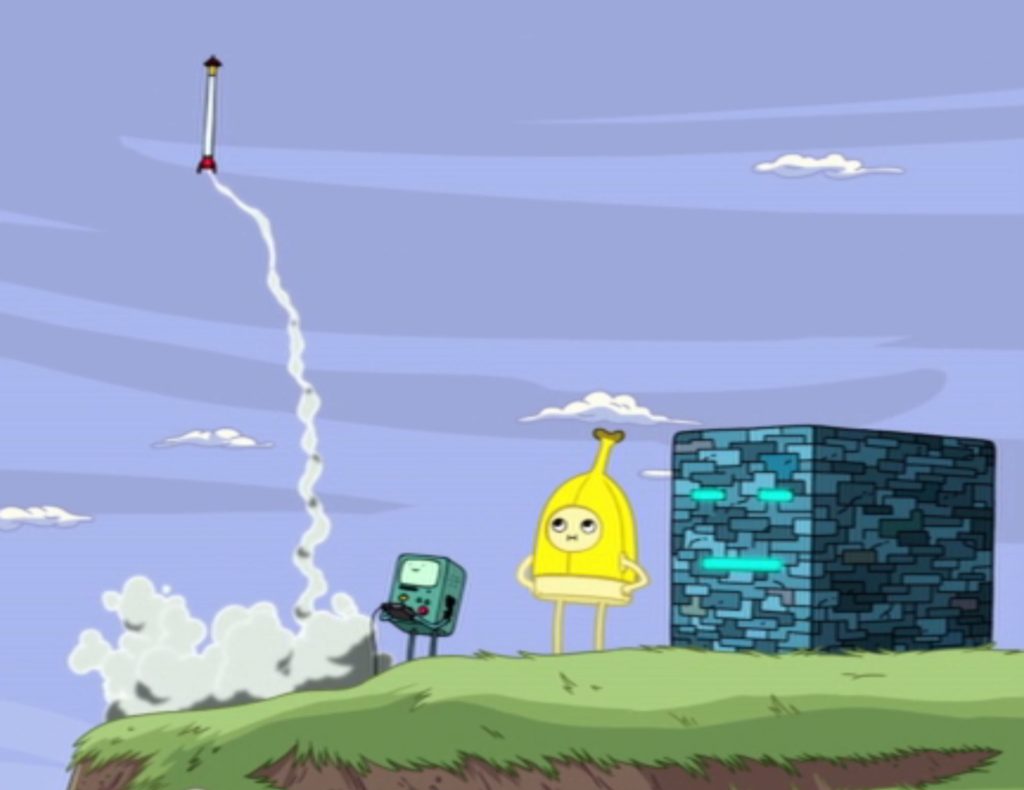 There’s a lot to break down at the end here, but one scene that stands out is BMO sending Moe’s memory disk into space on a rocket constructed by Bananaman. This ties in the astronomical prowess displayed in past episodes by the Weird Al-voiced character of Bananaman, while also fulfilling a dying wish from Moe expressed in “The More You Moe, The Moe You Know” to AMO. ALLMO, who is the compacted form of all the rest of Moe’s creations, also gets a chance to show up in this scene. 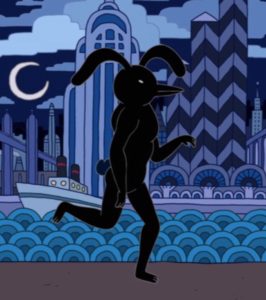 The montage was also a chance to insert some one-episode characters such as The Jiggler, who appears in a business outfit, and the Crabbit Familiar from “Sky Witch”, seen living out its dream to become a dancer as expressed at the end of that episode; Donny the grass monster is seen as an audience member for the Crabbit’s show. Dirt Beer Guy also appears witnessing a toast between Starchy, Crunchy and Punch Bowl, with a cloth in hand perhaps suggesting that he now works for the bar he often frequented during the show.

The last shot in this finale is Shermy and Beth, upon reaching the top of the tree, recreating the pose done by Finn and Jake in virtually every other intro sequence over the course of Adventure Time‘s 200+ episodes. So just as the show began, the show ends with new characters taking the mantle for every adventurer who will follow in Finn and Jake’s footsteps over the next millennium. Goodbye, Adventure Time. Aw yeah!