War is a terrible, scary thing, and it can be very hard to describe. Many television shows and movies have tackled the subject of war, and in many different ways. Some lean on realism, showing recreations of real battles, and others use science fiction or fantasy as allegory for real wars. Today I want to look at one of those allegories, one that comes from an unlikely source: Dr. Seuss. Dr. Seuss’s The Butter Battle Book was turned into a TV movie that aired on TNT in 1989, ironically, just four days after the Berlin Wall fell. The half-hour special was made by Ralph Bakshi, and is far and away his most kid-friendly work. The short is extremely faithful to the original book, and that may be why it is not as remembered. 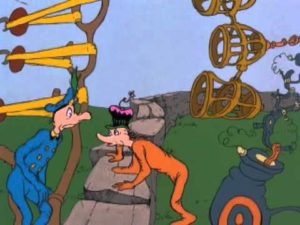 Plenty of Dr. Seuss stories have a moral: The Lorax, Horton Hears a Who, How the Grinch Stole Christmas, but those are morals that often agreeable. Some people may say The Lorax is too environmentalist, but that’s nothing compared to The Butter Battle Book. The book was actually banned in some states of the USA and parts of Canada. It centers on the Yooks and Zooks, who are very similar, except one eats their bread butter side up, and the other eats their bread butter side down. The two live across a wall from each other, and build bigger and bigger weapons to keep each other from attacking. The important part is no one uses these weapons, but keeps trying to look stronger, until both sides have the children’s book version of a nuclear bomb. The book ends with no conclusion, and basically a situation of mutually assured destruction.

This book came out in 1984, and many people in America were not happy with the Cold War being compared to which side of bread has the butter. This controversy was carried over into the TV special, which despite having songs, is still about mutually assured destruction and the meaninglessness of war. Rather sullen stuff for a kid’s after school special. The special wasn’t banned like the book, but rather, has been forgotten. 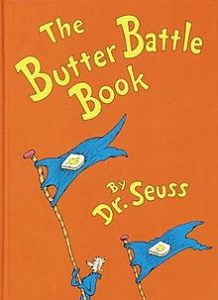 What stands out most to me, is the fact that Ralph Bakshi directed this. Bakshi is known for literally being the opposite of a kid-friendly director. He directed the first X-rated animated movie, Fritz the Cat, and has some other R-rated work under his belt. Even his PG works don’t come close to being this kid friendly. At first, I thought this made the special an oddity in Bakshi’s filmography, but after watching it, I’ve realized it’s the perfect fit. Bakshi loves to make protest films, such as the aforementioned Fritz the Cat. He loves to challenge the status quo, call out injustice, and point out when things, frankly, suck. So of course when he does a children’s special it’s about mutually assured destruction. I don’t know if other directors would have left the ending of the book intact, but even if the book had a happy ending, Bakshi would have made it melancholy.

This is a neat little special, and one a lot of people have never seen. Maybe it’s too dark, but personally, it’s one of my favorites, and while we wait for the new Grinch movie, we can look back on this long forgotten Dr. Seuss special.