Violet Evergarden Gives You an Excuse to Cry 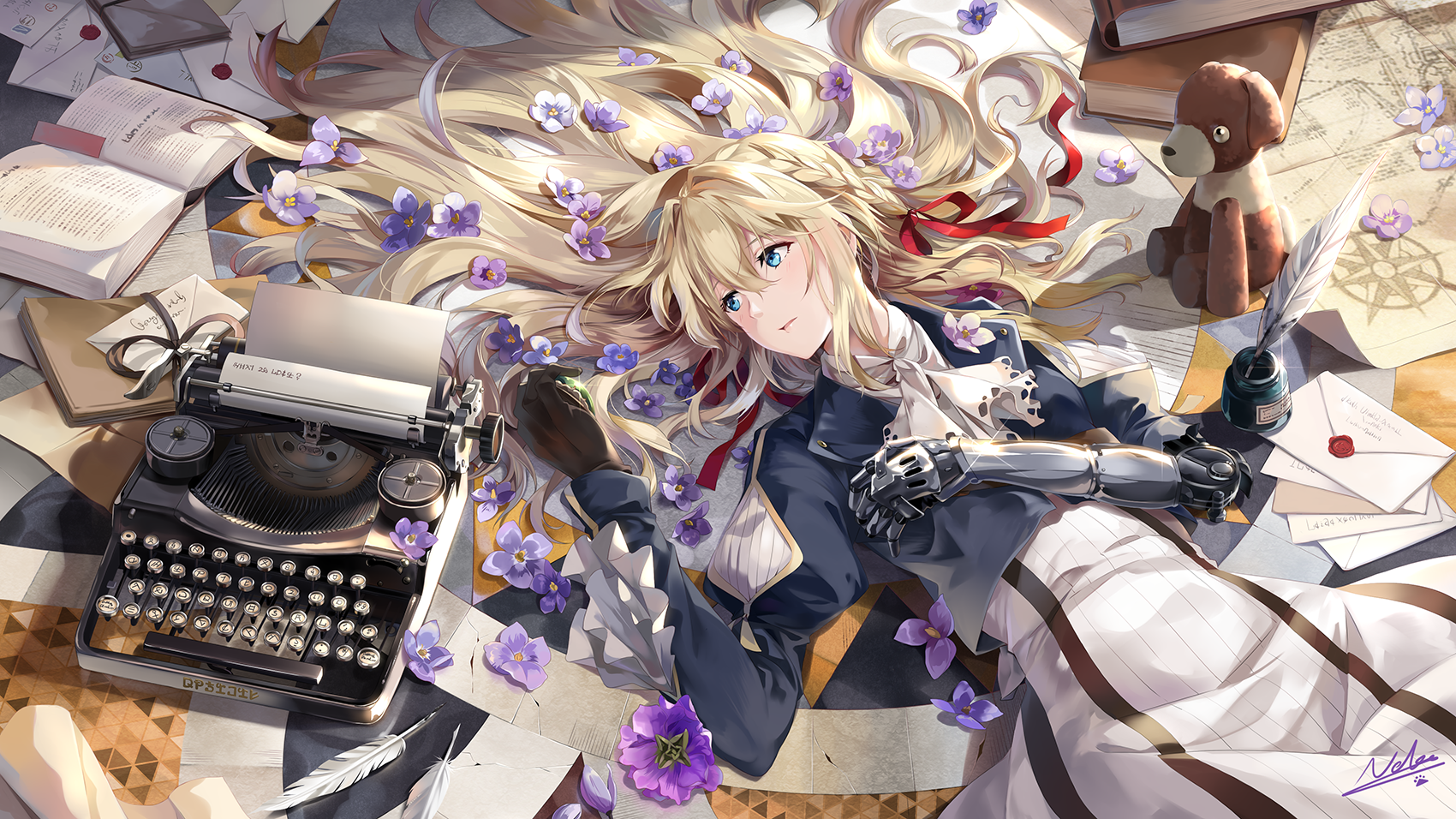 Set in an alternative post-WWI universe, Violet Evergarden tells the story of Violet Evergarden, a former child soldier who has spent most of her life in the military following orders from her commanding officer, Major Gilbert. Just as the war reaches its climax, Major Gilbert gets mortally wounded. Before he dies, his last words to Violet are, “I love you”. Trying to grasp the meaning and emotion behind his words, Violet becomes an “Auto Memory Doll”, a person who carries people’s thoughts and emotions and then transcribes them into heart-felt letters. With her new job, she hopes to gain a better understanding of “emotions”.

Watching Violet Evergarden was cathartic for me because it gave me an excuse to cry. Around this time, I was looking back on my past and imagining if things went differently. Viewing Violet’s struggle to overcome and understand her past, it made me realize that although there are certain parts or events in her past that she wishes to do-over again, her past is her past. It can’t be changed or rewritten so she has to learn to live with it.

For most of her life, Violet is used to following orders from someone else namely Major Gilbert. Major Gilbert’s brother Diethard even compares her to a dog nicknaming her “Gilbert’s dog” since her behavior is similar to a dog’s behavior. Violet is dependent on the Major Gilbert for directions; she won’t do anything without his consent. Also she serves as his steadfast loyal companion, always by his side.

Once she and Major Gilbert part ways after the war, Violet is more concerned about his well-being more than hers. She attempts to speed up her recovery so she can ready for his next set of orders. Hodgins, a mutual friend of Violet and Major Gilbert, notices her eagerness and urges her to think for herself and make her own decisions. This idea of independence takes Violet a while to grasp since she’s used to following orders from someone else. One night, Violet and Hodgins have a talk. He understands how much of her life has been spent in the military obediently following someone else’s commands. However he informs Violet that as a result of following commands, her past actions will return to haunt her. She won’t understand this information now but she will later on.

“You don’t realize that your body is on fire and burning because of the things you did.
You’ll understand one day and then you’ll realize for the first time you have many burns.”

Violet’s choice to become an Auto Memory Doll signifies her growth as a person because it shows the viewers that she is slowly learning to how to think for herself and make her own decisions without having to rely on others for commands. Taking the initiative herself is a good example of this. For a brief period of time, Violet’s life is going well. She has a better understanding of emotions which are present in her improved letter writing skills. Her words can now fill letters with warmth and heart-felt sincerity whereas her letters from before were formal and cold.

However once, Hodgins reveals the truth to her about Major Gilbert, Violet’s world crumbles. She begins to recall his words to her about “her body being on fire because of her past actions”. Upon this realization, Violet discovers that she has burning guilt and regret welling up inside of her due to flashbacks of following orders to kill the enemy and her inability to save Major Gilbert from dying. She blames herself viewing it as her fault for letting down Major Gilbert. Hodgins tries assuring her that she has come a long way from taking orders to becoming her own person as an Auto Memory Doll. She did that all on her own without Major Gilbert’s help. “You should live your life on your terms without Major Gilbert’s orders.”

Violet even begins to question her own worth wondering if she has the right to live while Major Gilbert had to die. Taking her dog plush from Hodgins, she attempts to destroy it since it symbolizes her dependence on Major Gilbert and her steadfast loyalty to him. Violet finds herself unable to follow through with the deed so instead she tries to strangle or choke herself in place of the plush. Feeling frustrated, she screams out in agony and has a nervous breakdown.  Violet appears lost and confused. Plagued with self-doubt, she searches for a sense of purpose or direction in her life. In a moment of desperation, Violet begs Major Gilbert to give her orders so her life has a sense of direction once more.

With that said, the impact of Violet’s personal interactions with friends will never be forgotten because her presence in their lives, no matter how long, has changed them into better people for knowing her.  A few minutes after Violet’s breakdown, she receives a letter from her co-workers, Iris and Erica with a personal request from Spencer, Luculia’s brother. Luculia is Violet’s friend from Auto Memory Doll Training School. Luculia has difficulty telling her brother that she is grateful for his presence especially after their parents’ death after the war because it means that she won’t be alone since she has her brother and they have each other.

In a show of empathy, Violet types up Luculia’s letter to her brother and brings it to him. Violet’s letter turns out to be filled with heart-felt emotion because she understands Luculia’s situation. Violet also has trouble expressing her feelings especially in regards to Major Gilbert. In addition, she considers herself responsible for his death since she couldn’t save him, similar to Spencer. After reading her letter and understanding her message, Spencer breaks down in tears, happy that Luculia is grateful for his presence in her life and sad at the same time feeling guilty for his past behavior of blaming himself for their parents’ deaths and using alcohol as a temporary solution to the problem. Her words of encouragement inspire Spencer to change his behavior and turn his life around leading him to obtain a new job.

He sends a personal request for Violet to be his Auto Memory Doll because she’s responsible for helping him get back on his feet with Luculia’s letter. It made him realize how important his life is. He wants to write a thank-you letter to Luculia for her kind words of encouragement. Immediately after finishing her Auto Memory Doll assignment, Violet bursts through the door to Hodgins’ office. She poses this question to Hodgins, “Do I deserve to live after all the bad deeds I’ve committed in the past?”

Violet deems herself “unworthy” to have her own life after acknowledging her past behavior in the military. Major Gilbert certainly thought otherwise. He chose to sacrifice himself so Violet could have a better life for herself after the war, a life that would be peaceful and normal. That’s why he placed her under Hodgins’ supervision if he disappeared. His final message of “I love you” to Violet means that Major Gilbert cares about Violet so much that he’s willing to place her needs above his own. Isn’t that one definition of “love”, putting other’s needs before your own. Saying that Major Gilbert’s sacrifice was “in vain” would be a huge disservice to his memory.

Violet hasn’t taken Major Gilbert’s sacrifice for granted. As an Auto Memory Doll, she helped repair the strained relationship between Luculia and Spencer, bringing them closer as siblings. Major Gilbert would be proud of her personal growth/accomplishments and happy to know that Violet can finally be a normal girl just as he wanted for her.

Hello, I am Josella Arriola. I'm an aspiring fiction writer, animation fanatic, and I follow the voice-acting industry. Some of my favorite animated shows are: Teen Titans, Rugrats, Kim Possible, and Gurren Lagann More by this author »