Overly Curious: An Interview with Liu Jian, Director of “Have a Nice Day”

Earlier this month, I hosted a podcast titled, “Top 5 Animated Films of 2017.” The main goal of that podcast was self-explanatory, but beyond discussing what I felt were the best animated films of last year, I hoped to express how I felt about the current state of the animated film industry. Unlike its live-action counterpart, the animation industry did not have a great year. Uninspiring. Formulaic. Safe. These are just a couple descriptors of the general quality of the animated films released in the U.S. in 2017. Frustration was difficult to keep out of my voice, especially when discussing the very films that proved the opposite was possible. Films like “Have a Nice Day.”

From its overall design to its very story, “Have a Nice Day” offers an escape from the family-friendly animated fantasies that dominate American movie theaters. The premise is simple: A young gang member steals a bag full of cash from his boss in order to pay for his girlfriend’s plastic surgery. The film focuses on the aftermath of his betrayal, a convoluted chase throughout a small Chinese city featuring the likes of a hitman, an underprivileged Steve Wozniak, and a woman who acquires the opportunity to reinvent herself. 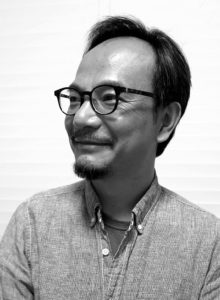 “Have a Nice Day” is the second film by writer-director Liu Jian. Like with his first film, “Piercing 1,” Liu mostly worked on “Have a Nice Day” by himself. A three-year endeavor, the film has finally arrived at American theaters, now playing in New York City and opening in Los Angeles this Friday. I interviewed Liu for Overly Animated in hopes to understand what drove him to create his film and what the future is for Chinese animation.

What was your source of inspiration for “Have a Nice Day?”

I live in China and I wanted to show a picture of contemporary China with my film. HAVE A NICE DAY is an ensemble film with no specific character who could be described as the main protagonist, unless we say that the bag of money is actually the film’s lead. The movie is set in a town outside a small southern city in China, and the trends of rapid urbanization and industrialization in the country change a small town like this in vivid as well as in subtle ways. I am fascinated by all of these changes and the people whose lives are affected by these dynamics. My main goal is to stay close to them, to observe the lives of the different groups of people, listen to their voices, and then be able to share their stories through filmmaking – showing their happiness, their anger, their sadness, but also their hope.

How did “Piercing 1” help prepare you for “Have a Nice Day?”

Generally, the process of conceiving, drawing, and animating HAVE A NICE DAY was not so much different from the way I worked for PIERCING 1 – I did most of the work by myself. At the same time the different themes and stories of the two films led me to incorporate different artistic ideas and distinct forms of visual expression, and in the end the two films each have their own visual universe. PIERCING 1 is a work that draws more on realism, and focuses on evoking the world and the society we live in, whereas HAVE A NICE DAY turns its gaze more towards the absurdity, the fantasy and the magical realism, or surrealism of the story I’m telling. In terms of the production itself, HAVE A NICE DAY is definitely more elaborate. In addition, I also tried to work with a new structure and way of storytelling for HAVE A NICE DAY, for example, there are more blank shots in this film. I always try to add new and fresh elements to my films, and each new attempt is me aiming to achieve deeper artistic value and social relevance for the work.

Despite the way “Have a Nice Day” incorporates absurdity and fantasy into its story, it manages to engage with topics such as poverty, lack of social mobility and opportunity etc. Did you start out wanting to make a film about those themes or were they organically woven into the story as you created it?

The latter. HAVE A NICE DAY is an animation film, but it’s penetrated through and through with the philosophy of realism. The film portrays an urban story that takes place on the edges of a southern Chinese city. There are so many uncertainties and possibilities to be imagined in such a dynamic and lively space as the city’s borderlands. What some might call surrealism is often the reality there, and that is fascinating to me in itself. I love to observe and reflect on how people there are living, thinking, and acting. The cultural landscapes of the city’s edges and the people who live there are one of the main sources and inspirations for my work.

At the same time, the coexistence of realism and symbolism emphasizes the fantasy and the absurdity of these characters and their stories. In modern China, magical realism is happening around us almost every day. Life at times can resemble a surreal comedy that is filled with both jubilance and self-paralysis.

Why did you decide to mostly work alone, knowing the intense demands of the animation process?

There is no short cut when making animation films.  The images must be painted one by one.

What do you think the Chinese animation industry will look like in 5 years? 10 years?

I haven’t thought about this very seriously. It will depend on the creators’ own efforts. 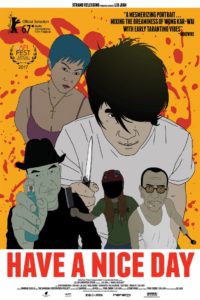 A big thank you to Liu Jian for taking the time to answer my questions!

To look for screenings of “Have a Nice Day” in your area, follow the link below: