Welcome to Autodale! Analyzing the Short Films of David Armsby

On November 11, 2017, a short film called No Monsters was uploaded. The art style looked intriguing, and reminded me of another short film I had seen a thumbnail of earlier. That short was Being Pretty, the first part of the story, and after watching both, I can say this is one of the best projects to come out of 2017. 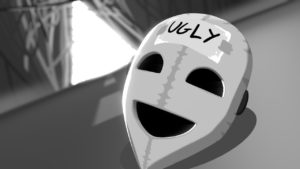 Before diving in too deep, these shorts can both get a bit heavy and have some mature imagery, so do be aware. Both of these shorts were created by David Armsby, and take place in the dystopian city of Autodale. Autodale is a happy, magical place modeled after stereotypical 1950’s suburban life, and old cartoons. Being Pretty looks at a public service announcement about the pretties and the uglies in the city, while No Monsters looks at a child’s bedtime story. Each short is only three minutes so I highly recommend you go watch them now because spoilers are ahead. 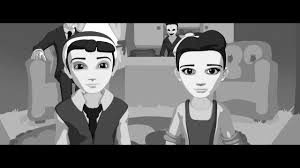 So in Autodale, only those who fit the mold are allowed, and any one that suburban 1950’s America frowned on is labeled as an ugly. They are rounded up by the handymen and their dead bodies are thrown into huge pits dug into an old road. Just about anything it seems can make someone ugly, and the reason they are considered ugly is taped onto their mask. Some of the reasons we see include: fat, deaf, blind, divorced, gay, retarded, old, and disfigured. In addition to the uglies and the pretties, we see a third group: the exceptionals. The exceptionals are a chosen few girls who are very pretty and good. The citizens of Autodale are warned that monsters lurk outside the city, and they must stay inside its walls. In the storybook from No Monsters,  it is an exceptional girl who finds monsters outside the city after trying to run away. We later see that that exceptional girl is real. She kept trying to run, and with good reason. We see her get captured and she gets stripped down to just a head and vital organs, and along with the other exceptional girls, seems to keep the Matriarch running. The Matriarch is the thing that keeps Autodale running, and even Armsby admits that he doesn’t know exactly what it is yet.

In just about six minutes, Autodale has become one of my favorite dystopian worlds. The whole thing is in black and white, echoing the classic cartoon feel that it already gives off. The classic cartoons only serve to add to the creepiness of the shorts, as seeing characters in cute Mickey Mouse gloves talk about euthanasia just makes me shiver. It’s the same kind of feeling you get from Bendy and the Ink Machine except more science fiction than horror. Armsby also said that the Matriarch is inspired by H. R. Giger, and it shows. It genuinely feels dreadful, not just creepy, but dreadful. It’s a rare feeling, but these shorts have it to spare. I’m beyond excited to see what this world has in store next, and look forward to reviewing a third short.