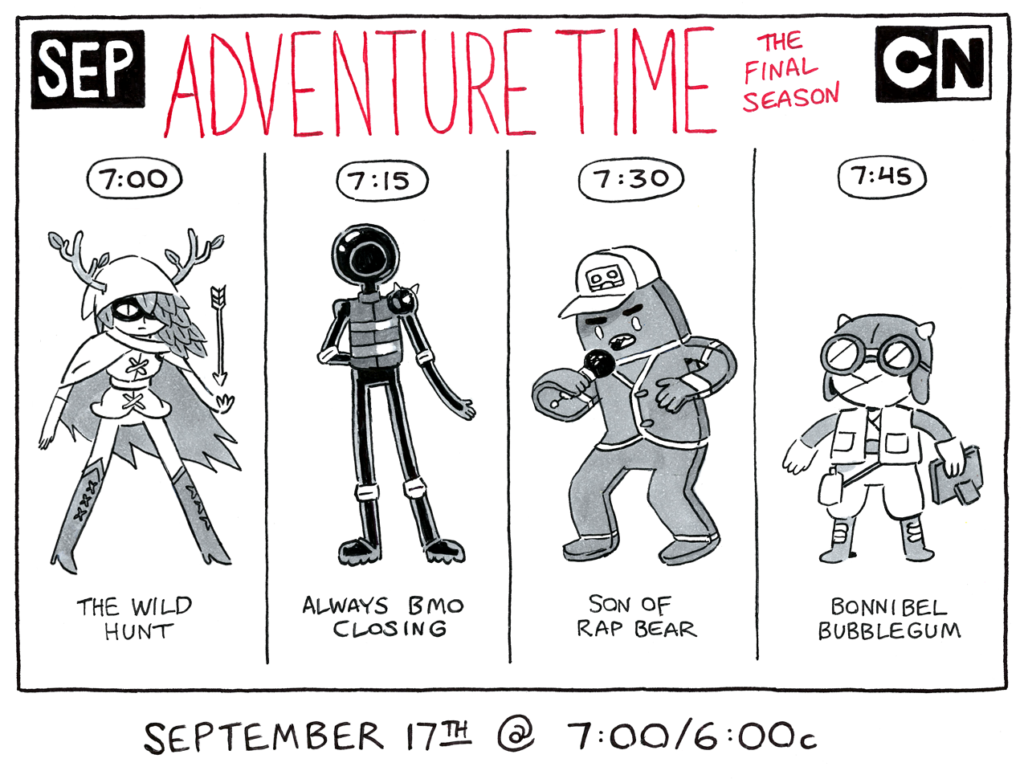 Cartoon Network plans to air the next four episodes of Adventure Time on the night of Sunday, September 17th back to back. This would mark the end of a two-month hiatus for the former foundation show of the network. The event will kick off at 7 PM with “The Wild Hunt”, which promises the return of Huntress Wizard. That episode will be followed by “Always BMO Closing”, a BMO/Ice King story, “Son of Rap Bear”, which will be Flame Princess-oriented, and “Bonnibel Bubblegum”, whose synopsis sounds like a long-awaited flashback episode to the founding of the Candy Kingdom. [ComicBook.com]

In the lead-up to the premiere of its fourth season on Setpember 8th, BoJack Horseman will be getting an official soundtrack, slated to release the same day as the fourth season premiere. The soundtrack will include classics such as the show’s opening theme performed by Patrick and Ralph Carney of The Black Keys, “Back in the ’90s” by Grouplove, and the Sextina Aquafina banger “Get Dat Fetus, Kill Dat Fetus”. It will also include a new cover of America’s 1970s folk rock song “A Horse With No Name,” performed by Michelle Branch and Patrrick Carney. [Pitchfork]

A quick reminder that the presumed two-part season finale of OK KO! Let’s Be Heroes will premiere on September 4 in the 6:00 PM block on Cartoon Network.

Voltron: Legendary Defender will be getting a virtual reality game very soon. DreamWorks Voltron VR Chronicles will have players be Lance and fight alongside the other heroes of the show in what seems to be a unique story. The game will be available on PlayStation, Oculus and HTC for $15; the date is unclear as some sources say September 26th while others say December 31st. [Engadget]

Star Wars Rebels has released its second trailer for its fourth and final season, which shows off some new plot points, as well as connections to the most recent addition in the Star Wars cinematic universe, Rogue One. More importantly, the news is that the season premiere will be on October 16th. [The Verge]

A Silent Voice, which has received critical acclaim for its anti-bullying message and was nominated for several Japanese animation awards last year alongside Your Name and In This Corner of the World, has a U.S. theatrical release date of October 20th. [Cartoon Brew]

Kate Winslet will lead the cast for the English dub of Studio Ponoc’s debut feature, Mary and the Witch’s Flower, which opened in Japan in early July. Other members of the dub cast include Jim Broadbent and Louis Ashbourne Serkis. [Hollywood Reporter]

Alf Clausen was fired from The Simpsons after serving as the show’s musical composer for 27 years. According to Clausen, he was told that the show is looking for “a different kind of music”. Clausen won two Emmy Awards in the late 1990s for his work, and has earned over 20 nominations during his tenure on the show. [Variety]

Despite recent buzz about a King of the Hill reboot, Mike Judge has announced his newest project, which is “Tales From the Tour Bus”. This will be an animated miniseries highlighting the careers of famous country music artists, including George Jones, Tammy Wynette, Waylon Jennings and Jerry Lee Lewis. The series is expected to be eight episodes long and will premiere on Cinemax on September 22nd. [Pitchfork]

John Cena is headlining a new animated series for YouTube Red titled Dallas and Robo. The show, which is slated to be ready for 2018, will star Cena as Dallas, a warrior, and Robo, a space trucker to be voiced by Kat Dennings, most famous for her work on 2 Broke Girls. Jane Lynch, Dana Snyder, Taran Killam and Clancy Brown are also attached to the project, which is being animated by Shadowmachine, the studio currently behind BoJack Horseman. [Hollywood Reporter]

I wanted to highlight the culmination of a great project headed by David Ely to restore 17 of the Superman shorts produced by Fleischer Studios in the early 1940s. Because of their age, the shorts were already in the public domain, so they are free to share as a part of animation history.

And finally, in this edition of Weird Animation of the Week, we highlight another stop motion animation. This week, we have a new music video by Sparks, who have been around since the 1970s. Their stop motion counterparts are seen wandering through old-style Paris as they search for the source of a mysterious feather.