“The Battle For Mewni” Mega-Teaser Breakdown

We’ve had several short promos come out over the past weeks preparing us for Star vs. The Forces of Evil‘s “Battle For Mewni” event, expected to premiere July 15 on Disney XD. However, the latest 60-second teaser released by the network has by far the most dissectable stuff yet. So let’s take this step by step and figure out what in the world is going down two weeks from now. 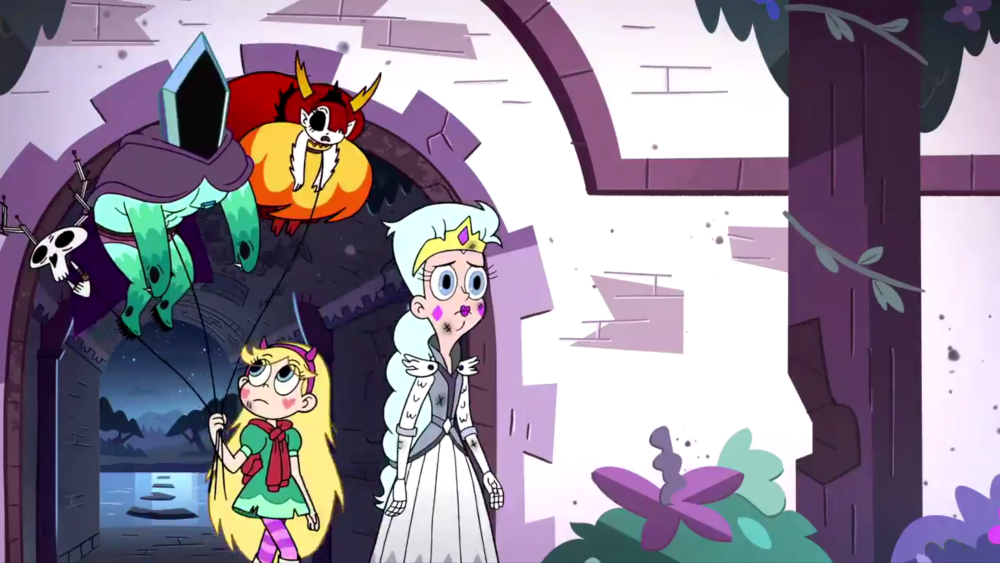 I already have no words. So we see the soulless corpses of Hekapoo, Omnitraxus Prime and Rhombulus being carried by Star as if they were balloons. This is wholly unexpected given that Moon had to drag them through the portal when escaping the fight against Ludo/Toffee in “Starcrushed”, so who knows how they could explain that one. On a secondary note, Star and Moon already look roughed up in this shot, making it seem that they’ve already faced some issues together before arriving at… 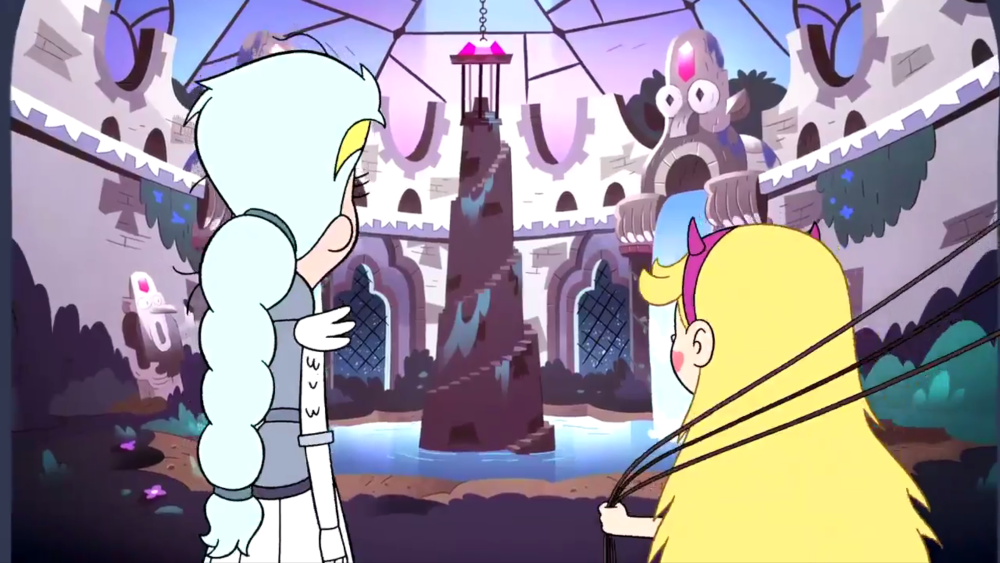 …where “the queens of Mewni have been coming for generations”. So, this place could either be a place of refuge for Moon, Star, and the queens before them, or perhaps a training center for queens to hone their magic, something that Moon would need Star to do to prepare for a fight against Toffee. It looks broken down, meaning that it hasn’t been used or even visited in quite some time. We see statues of Glossaryck-like figures (although they have beards), and in line with the recently released season 3 promo, it seems like we’re being prepared for him to have some influence in this event, even if we haven’t seen him in the flesh in “Battle For Mewni” trailers so far. 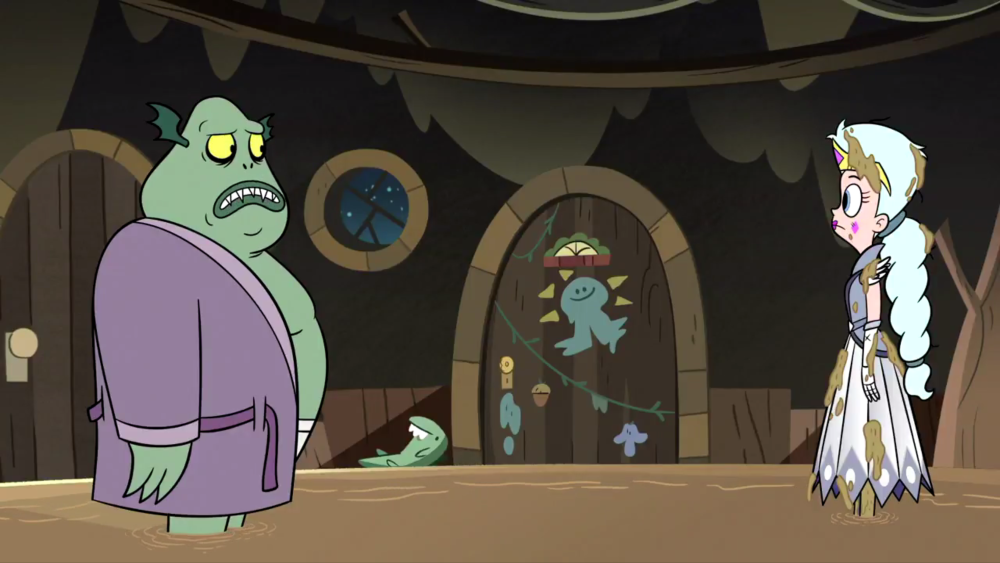 Then we get a shot of Star being enchanted by a frog and falling into a puddle of mud. Classic happy Star, so that’s always nice to see. The puddle of mud is similar to what we see here in the home of Buff Frog, when he comments on how strange Star is. (Moon’s begrudging “thank you”: perfect.) We know that Buff Frog no longer has any allegiance to Ludo and has partnered with Star in the past, so it’ll be nice to get the Russian accent back into our lives at least for a brief time. 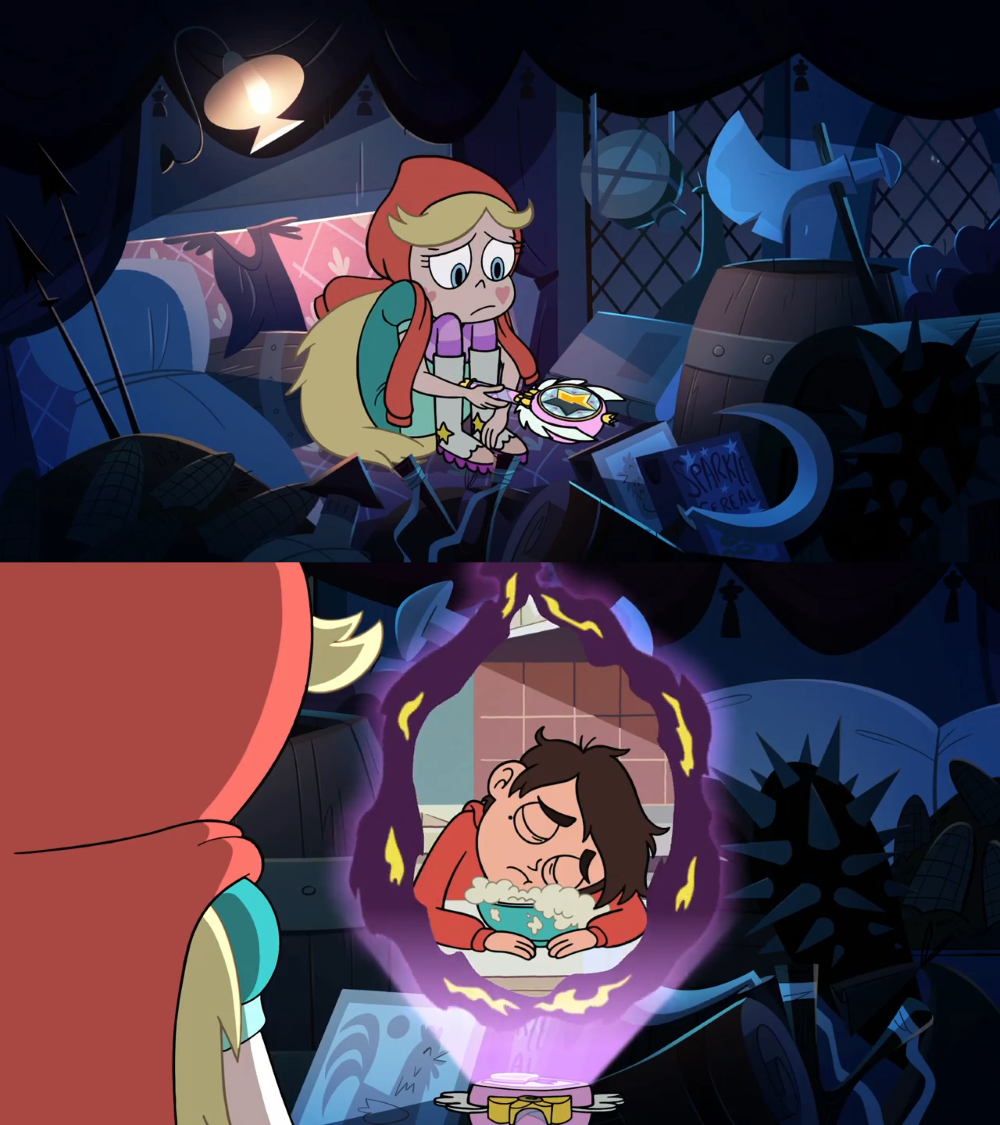 We saw sad Marco in a previous trailer, but now we see Star watching him be sad via the All-Seeing Eye Spell. Interestingly, while we’ve seen Star wear Marco’s hoodie (a point of interest for Starco shippers everywhere) wrapped around her neck, here we see her wearing it around her head. And in the immediate frame, we see Star with a piece of the hoodie wrapped around her arm, with the rest seemingly ripped off. Based on how many configurations of Star + Marco’s hoodie we’ve seen and the very different situations she’s been portrayed in (In the final case, she defiantly says, “I didn’t blow up my whole life just so you could give up,” to an undisclosed character.), it’s possible we may need to look at that as a motif reflecting Star’s emotional situation. 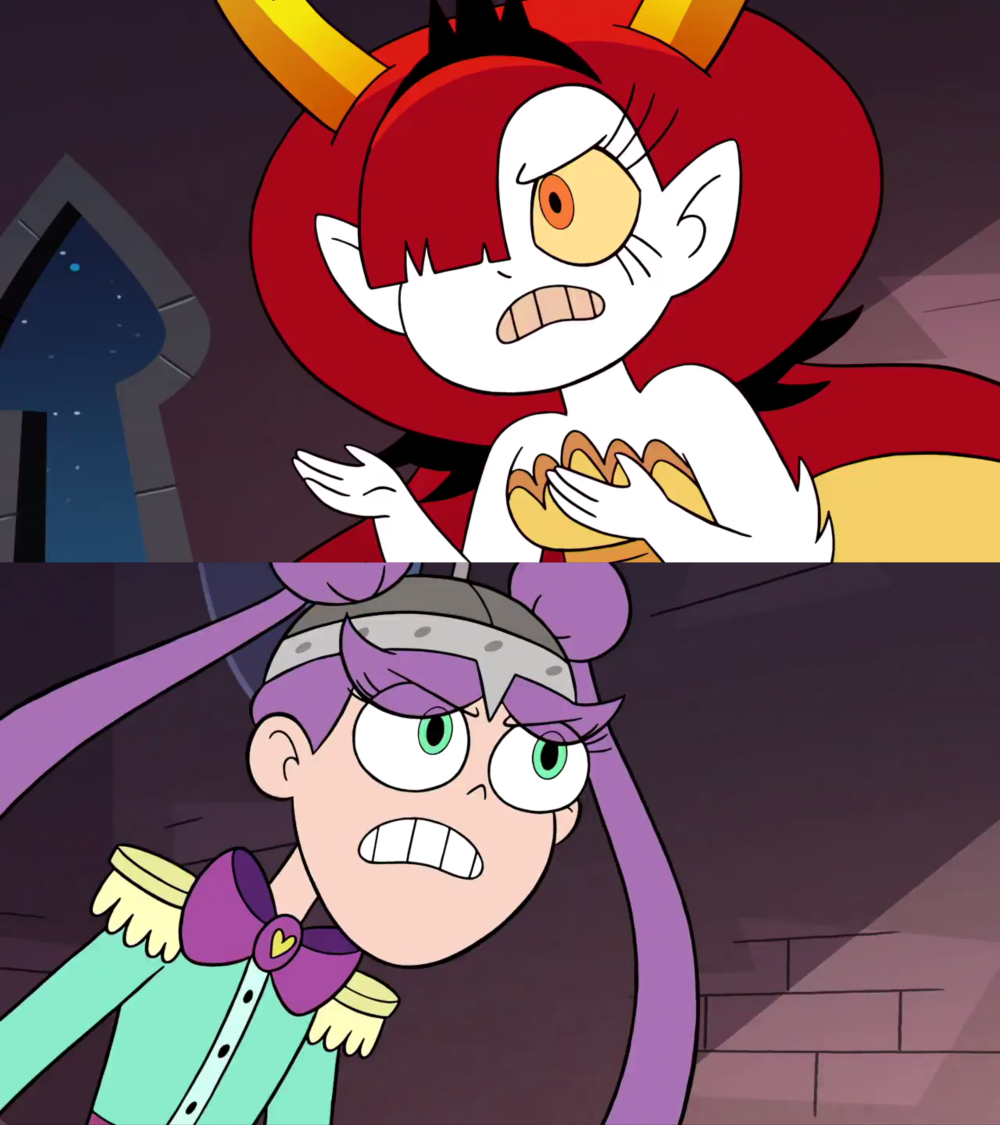 In the middle of this, we get an interesting exchange between Hekapoo and Mina Loveberry. Loveberry looks sane here, and is wearing what looks like official garb, so my bets are on this conversation occurring in a flashback. Mina is arguing for going to war, while Hekapoo is arguing in favor of signing a “peace treaty”. While we haven’t gotten mention of this in the show, in Star and Marco’s Guide to Mastering Every Dimension, it is mentioned that Toffee violated something called the “Mewman-Monster Accord”, so perhaps the peace treaty mentioned by Hekapoo is related to, or the very same as that accord. Much later in the trailer (read: 30 seconds later), we get a shot of Mina whipping her hair at a monster king in handcuffs with what appears to be the treaty laid out on the table. So if we get a flashback of Mewnipendence Day-era politics, I’m all for it. 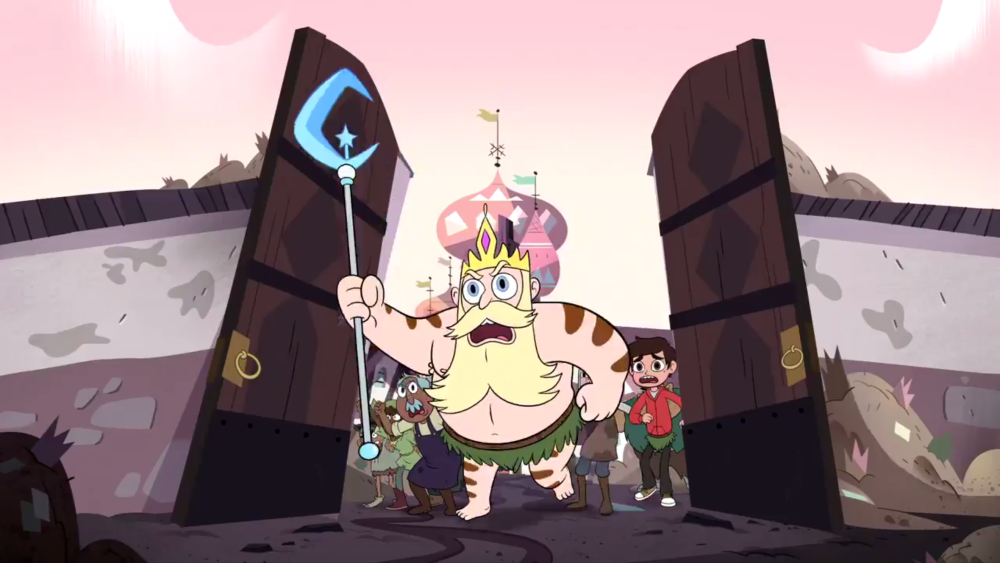 After Mina Loveberry’s statement about going to war, we get a quick glimpse at King River, in barbarian garb, leading a ragtag group of Mewnians against Ludo and his rat army, with Marco in tow. If Moon and Star are in exile, then it makes sense that authority falls upon River in this usually matriarchal society. So far in the series, River has been used as a punchline by the program, so if he gets an air of seriousness, that would be a huge development in his character. Of course, Marco’s presence here at least confirms his status for the event, although it remains to be seen if Marco/River’s path will intersect with Star/Moon’s wanderings. (Also, River carrying a Moon staff, cute.) 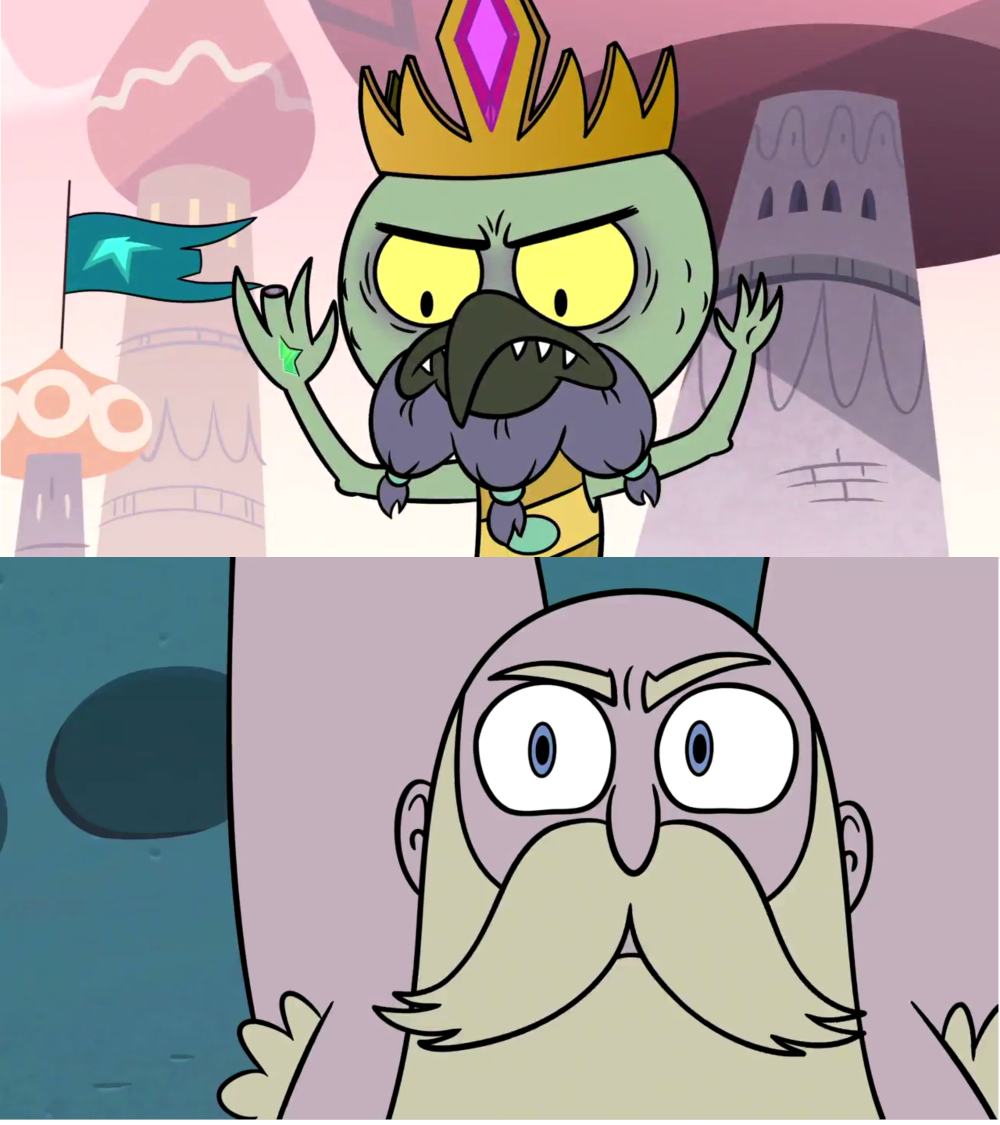 Unfortunately, it seems that River’s attack is initally unsuccessful, as we see Ludo with the crown and River apprehended in a prison as Ludo holds the key. River sternly says, “You will never be king.” Not much to analyze here. 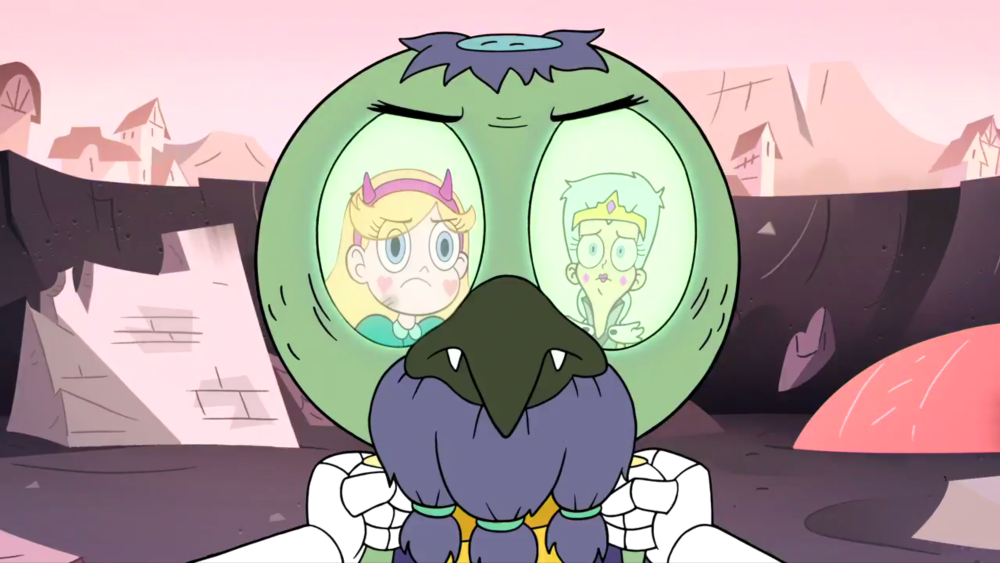 As Moon says to Star, “he’ll find us,” we see what is presumably Moon holding up a possessed Ludo. During the scenes where Ludo attacks Mewni, it appears that he is in control, and with the return of green-eyed Ludo, this seems to nix the idea that the attack on Mewni is fully Toffee’s idea, as Ludo seems to be his conscious self in those pieces of the trailer. 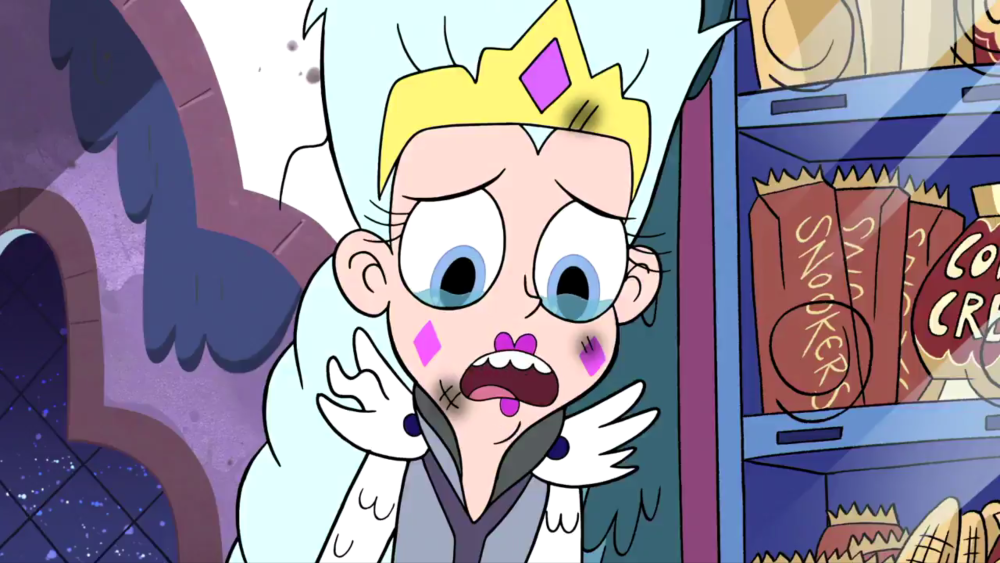 “Toffee killed my parents.” Well, there goes Moonfee… In seriousness, this does give us some insight into what would have fueled Moon into using the “darkest spell” to neutralize Toffee, as alluded to in “Into the Wand” and the first “Battle For Mewni” teaser. Hopefully in the expected flashback, we get information on who Moon’s parents actually are, although the mother will probably be one of the queens shown on the walls in “Into the Wand”. 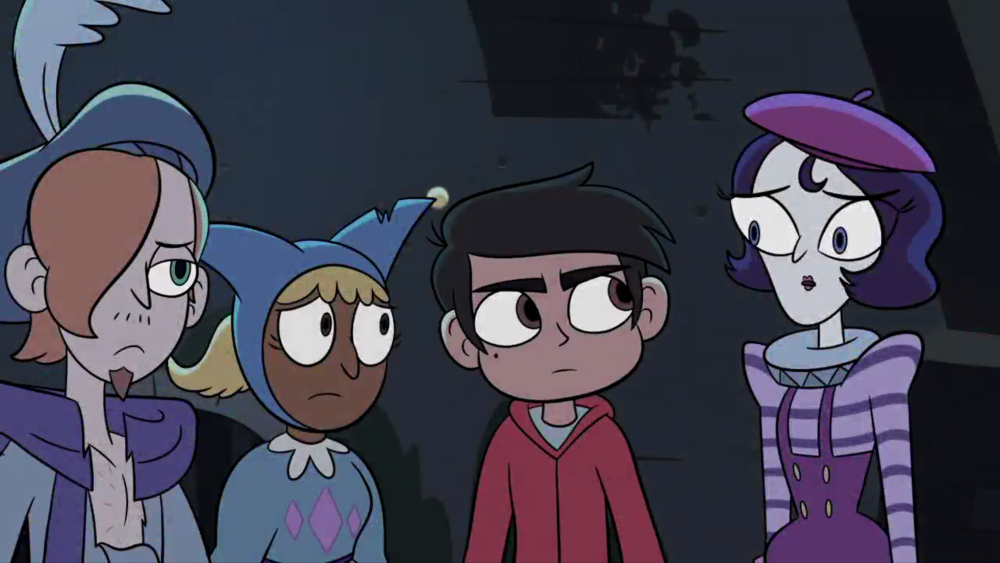 Ruberiot comeback! Questioning by Marco on how that segment got into the Princess Day song in “Face the Music” is now a possibility. Oh, and we have other jesters invited to fight with Marco. I am ready for the goofy karate moves of the Diaz regiment. 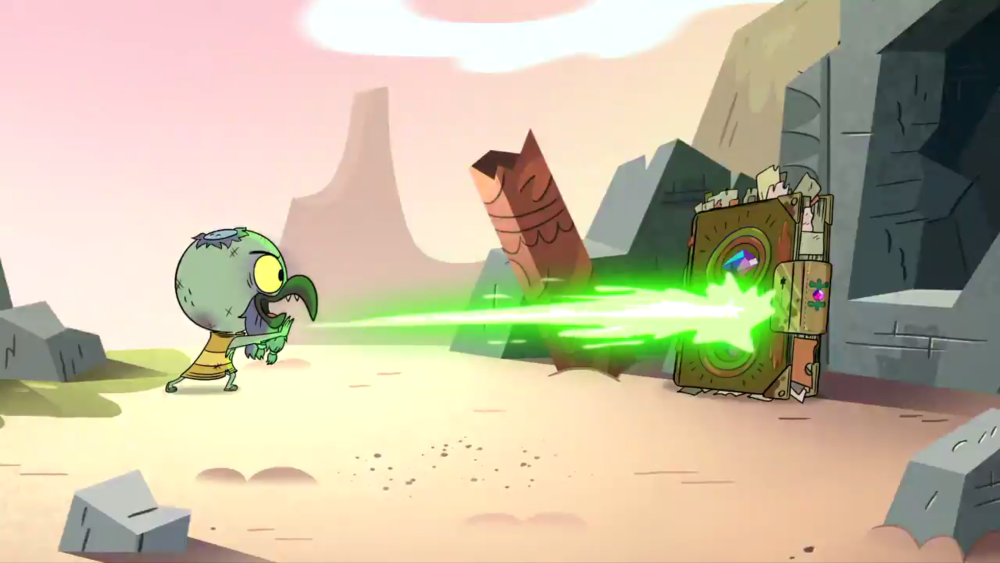 This shot of Ludo shooting his magic at the spell book is just incomprehensible. What use would that be? Also, we still have the question of whether the book found by the Magic High Commission in “Starcrushed” was a fake, or if the one in this shot is also made blank by Glossaryck or another force. Actually, if Toffee has something against magic in general, hinted at in “Storm the Castle”, it’s possible that this may be an attempt to destroy the book. But I can’t see a reasonable explanation for Ludo attacking it aside from general frustration.

OK, a lot to take in this 5-second stretch. We have young Moon being surprised by what she sees in a book, probably not something she’s allowed to see judging by her incognito look. Then we have a reprise of the dark magic covering Moon’s wand, something we already saw in the first season 3 teaser, followed up by a handshake, with one of the participants probably being Moon, and one of these participants also being engulfed by dark magic. And in the middle of that, we have Toffee looking super cool, barging through a cave of skulls. An interesting detail is that his right shoulder skull has the mark of a diamond, Moon’s symbol. As for his left shoulder skull, it bears the mark of a spade, which is the mark of… 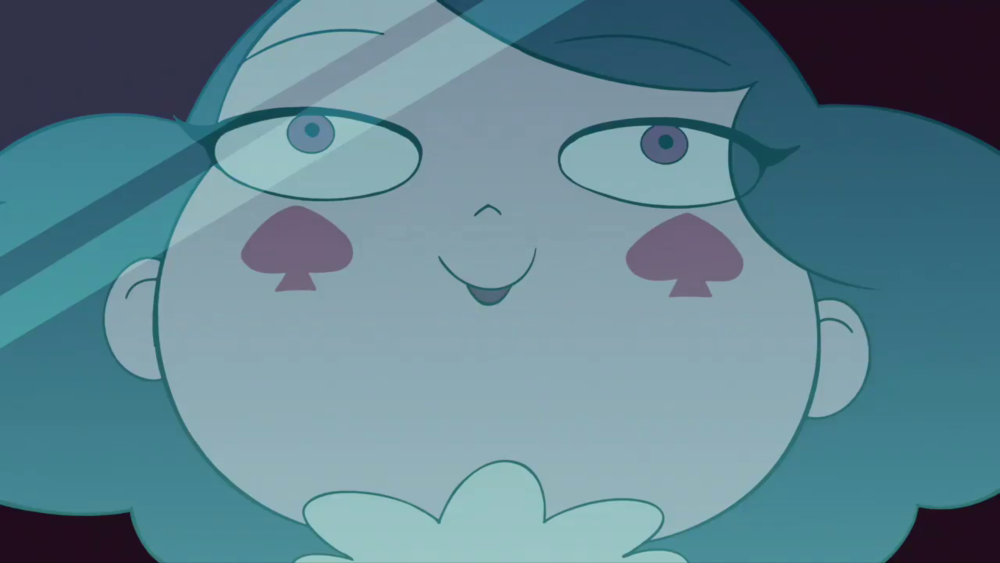 …Eclipsa, who according to Moon, is alive and made a deal with Moon. Derpy face aside (seriously, this should be a meme), this is huge. We’ve already speculated on her status since seeing her encased in Rhombulus’ crystal room in “Crystal Clear”, and it appears that she’ll be an important piece to all of this. As the christened “Queen of Darkness”, we speculated on her being the source of the dark magic witnessed in the first season 3 trailer, and that speculation only strengthens with her appearance here.

All in all, if you weren’t hyped for “Battle For Mewni”, you better be now, as it looks like this two-hour event is going to take us all over the place. Keep following Overly Animated for further developments, as well as analysis once this finally airs.

“The Battle For Mewni” premieres on Saturday, July 15th at 11 AM on Disney XD and the Disney XD app.