Samurai Jack and its 22-Minute Exploration of “The First Time”

Content warning: This article discusses explicit themes explored in a recent episode of Samurai Jack, a show not suitable for some younger audiences.

Genndy Tartakovsky has returned to form with an excellent fifth season of Samurai Jack, airing this year on Adult Swim, whose lenient ratings have led to the show’s experimentation with more mature themes despite its origins as a tame action-oriented “children’s” show. For the most part, the show has taken advantage of the upgraded TV-14 ratings to focus on an increase in the visibility of violence, as well as the handling of the protagonist’s fight with self-loathing inner turmoil. However, aside from a couple of innuendos and one well-timed joke by a robot henchman, the show hadn’t really tried its hand at sexuality until the eighth episode of this truncated ten-episode season. Episode XCIX, which aired last Saturday, explored the relationship between Jack and former assassin turned sidekick Ashi. Surprisingly enough, this was one of the few episodes this season that came in as a TV-PG rating, and yet it somehow managed to fit in so much sexual imagery and jokes that it’s frankly astounding. While we won’t deal with the polarization this episode caused among the Jack fandom, I do want to deal with the interpretation that this was essentially a 22-minute representation of Ashi and Jack, two naive beings when it comes to sexuality, engaging in intercourse. Outlandish, I know. But there’s a way to look at this professionally, and I want to give it a go, recapping the episode through this prism. 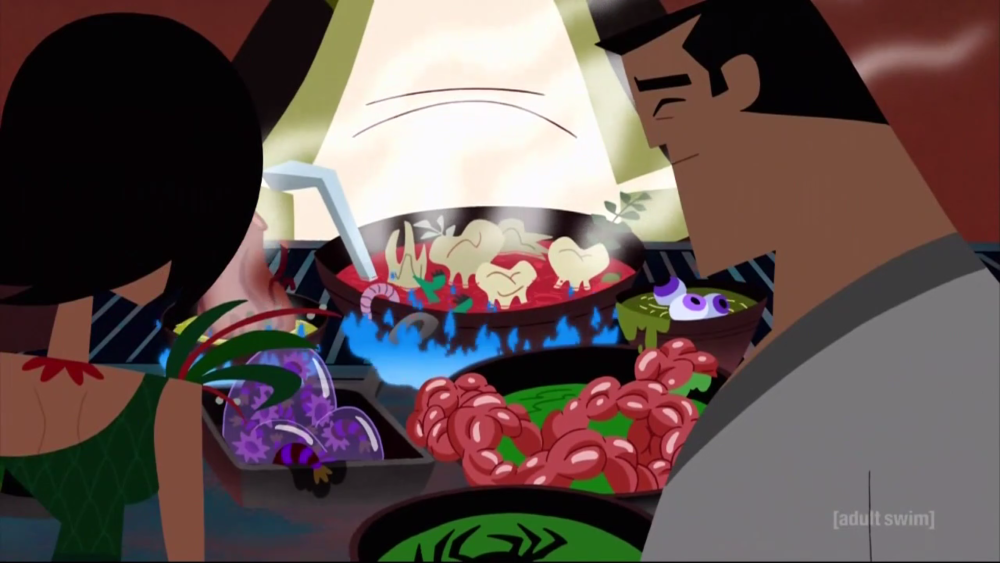 So the episode really gets going when we see Jack and Ashi going through your standard Middle Eastern bazaar looking for some food before their night out. This is your classic scenario of getting a romantic dinner to get each other in the mood. Unfortunately, Jack, not being all that experienced, orders a more exotic food that his girlfriend isn’t all that trusting in, and for the right reasons as we’ll touch upon later in the article.

After the dinner, you take the subway back to your place of comfort. For most people that would be their home, but in the case of the wanderer Jack, he is most at home these days when he has an unsettling abandoned prison with a blob monster to fight. But first you have to survive the hormones that come about when you’re pressed against your girlfriend on the train. Immediately when Ashi gets pushed into Jack, she remarks, “Ooh, something’s poking me!” The show clarifies that it’s the hilt of Jack’s sword, but we can guess what other implement in the lower body area could’ve been brushing against Ashi’s grass dress. They continue to fumble around with contact when they try to avoid touching each other’s hands as they grab for the support pole (who hasn’t been there on public transportation, though?). Jack tries to lighten the awkwardness but only makes matters worse when he comments on how “humorous” the whole situation is that they’re trying to avoid each other’s touch and says that “the temperature seems to be rising.” A pickup line if I ever heard one. Ashi responds with an attempt to laugh at Jack’s on-the-spot humor, but you can tell she’s feeling the “rising temperature” in the room as well, and tries to avoid eye contact with Jack later on in the encounter. Points for Ashi being one step ahead of Jack in the flirting game. 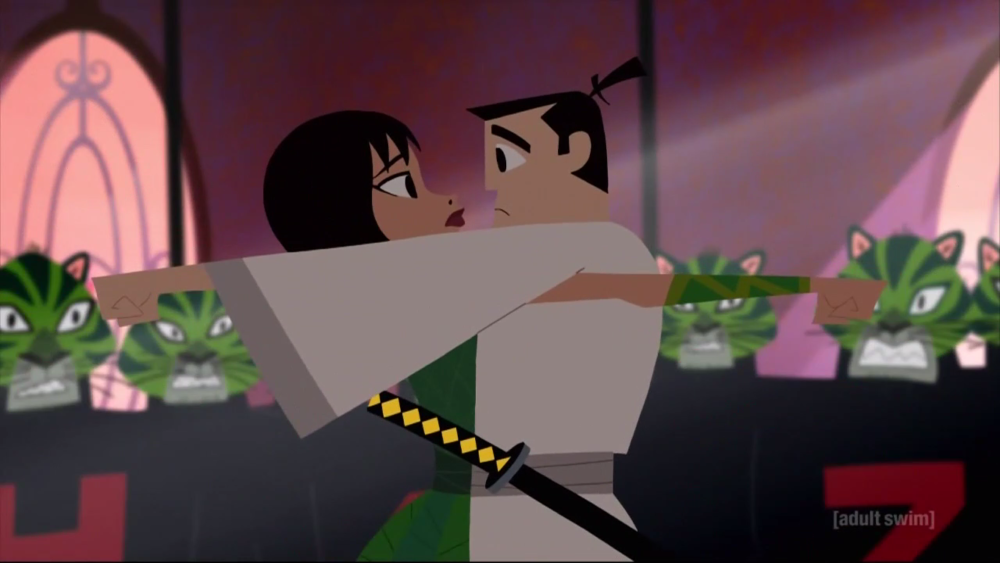 The awkwardness is cut by a fight scene with the passengers in the train, although we still get some pauses when Ashi and Jack get too close in the heat of the battle, including an apology for when their fists touch at one point. Like a couple who’s gotten stuck in a subway car with an unbearably drunk hobo, they get off early and decide to handle the rest of their trip on foot.

Given the fact that time is like the sands of an hourglass to Jack, it takes them several days to journey after leaving the train. Jack, ever the gentleman and getting Ashi even more comfortable, even decides to get her girl a matching hat. I have not tried that move before, so it’s unclear whether this is an effective strategy in real life, although the road of getting your potential partner new clothes is a time-tested tradition.

Unfortunately, they lose their hats in an ensuing sandstorm, but they encounter Jack’s home of danger just in time. Ashi follows her man in and immediately gets comfortable with the close quarters, to the point where Jack tells her to be careful, and Ashi immediately asserts her dominance over her surroundings, getting around with ease.

Getting to the Action 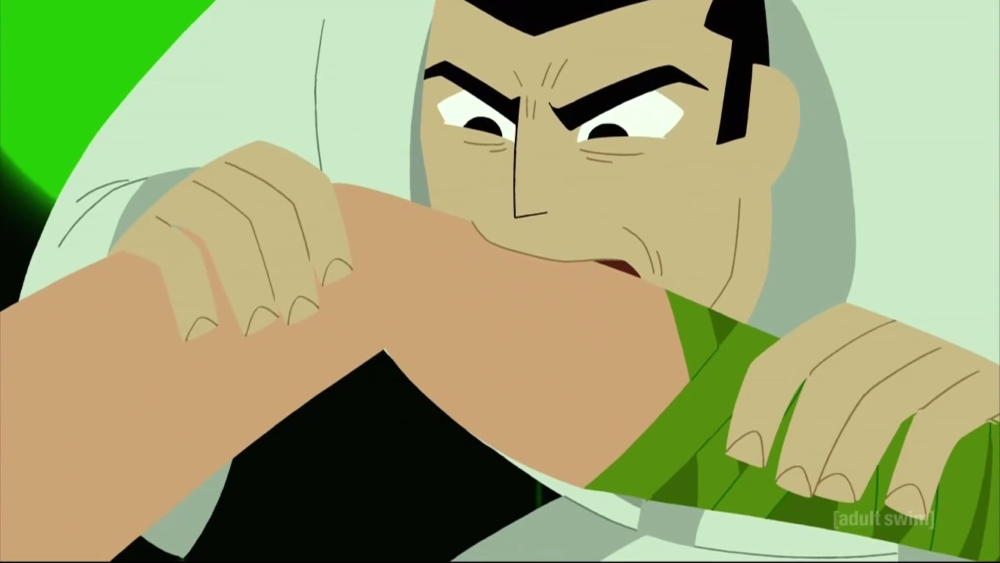 Now, the next scene might be a bit of a stretch, considering the show portrays it as Jack saving Ashi from a venom infection, but one could just as easily see the sucking on our girl’s leg as our first edition of foreplay in this interpretation. They get their energy going through a running sequence, which would definitely involve some heavy breathing (you make the connection).

Oh yeah, they find the monster that spawned the venomous creature Ashi was attacked by earlier. They find a tool that Jack is unclear how to use, an experience many sexual relationships have gone through in their first time using a toy to increase pleasure. While Jack is worrying about how to use it, Ashi is undeterred and declares that she is ready.

Once they enter the fighting corridor, essentially Jack’s bedroom given how comfortable he is with the act of defending himself and his acquaintances, Ashi takes a go at working with the toy, and is stripped of her clothing, initiating the true “sexy time”. Jack, who hasn’t been with a woman like this, is immediately taken aback, but eventually goes with the flow and takes off his gi. As evidenced below, this is a man ready to show off, after some initial trepidation. 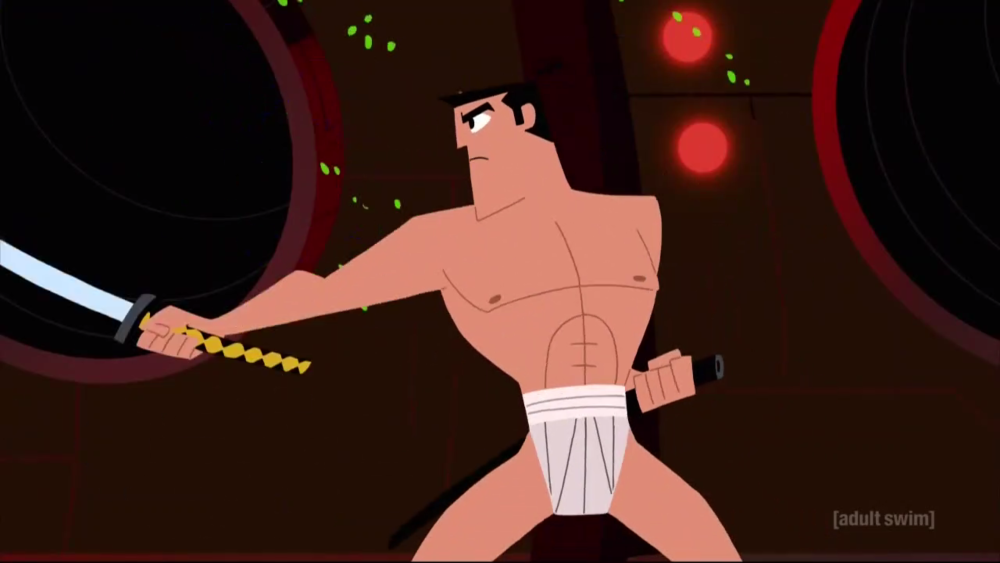 Losing It (Or Losing My Mind)

After getting naked and some further action, Jack finally gets the “toy” to function properly, which results in Jack and Ashi shouting at the top of their lungs. Their faces approach each others’ as they scream each others’ names. Finally, they let out final guttural screams followed by extended grunts as lightning scatters throughout the room and an explosion of splooshes surrounds the pair. Losing virginity is a painful experience for some, and it probably is for these two as well, judging from the looks on their faces as the goo is released around them.

After the climactic ending to such an event, the first time they’ve done this together, they’re left to be alone with remnants of their goo on their faces. They take some moments to catch their breath after such an amazing experience and look into each others’ eyes. Finally, they engage in a post-coital embrace as they lock lips, once again before even washing the remains of their sexual experience. 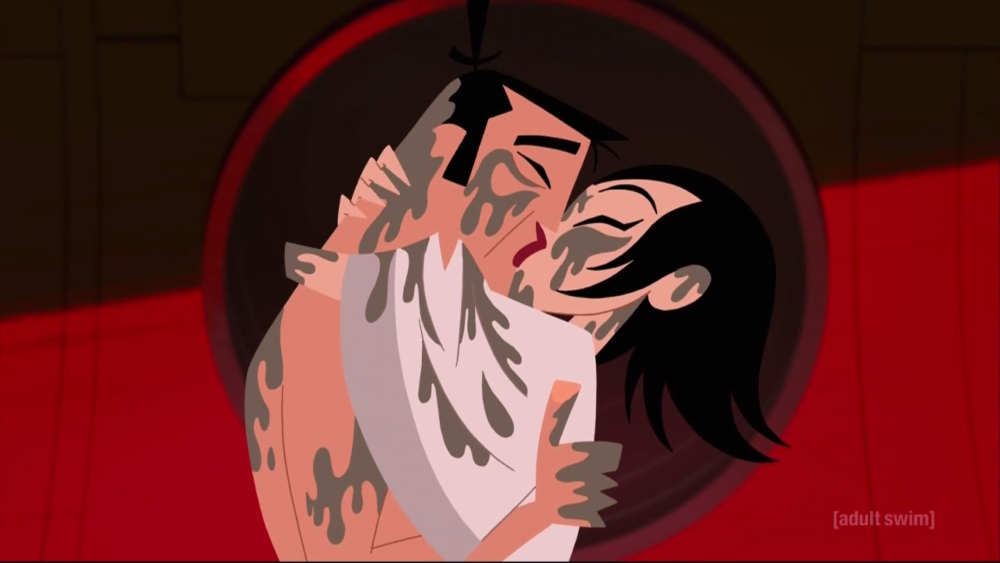 And that is Genndy Tartakovsky’s 22-minute fanfic of Jack x Ashi brought to life in an episode aired on national television under a TV-PG rating. Or just the over-analysis of a crazed animation fan. You be the judge of that. But a final piece of evidence I’d like to share: Remember when I talked about the food Jack ate at the beginning of the episode? It had some side effects, turning his head into what looked to some as a fish…

… but, maybe it’s just the Scaramouche in me, but doesn’t he look like a talking vagina, thus signifying that Jack consumed an aphrodisiac, which is what caused his repressed feelings to finally come out in force in this episode? I rest my case.

The final two episodes of Samurai Jack air on Adult Swim at 11 PM EST May 13 and May 20.