What’s in a Rating?

Consider this half public service announcement, half testimonial. What I want to do today is talk about something that’s been on my heart for a while: content ratings. What sparked this was an article on a website about petitioning for TV content ratings reform. At first I was all for this, but then I looked closer. They were complaining about things being rated as family friendly that weren’t, when I know for a fact that the rating had to have been at least TV-14. TV ratings need to be fixed, but first we need to understand them. This article is broken down into three parts: how the ratings work, TV ratings and animation, and a plea to parents. After hunting down the petition they referred to, I realized the biggest problem it suffered from. The petition assumed that any 14 year old should be able to sit in front of any random TV-14 program, and not see any content their parent disapproves of. This is the fundamental error of the petition, and why I feel the need to discuss the point of ratings.

How the Ratings Work 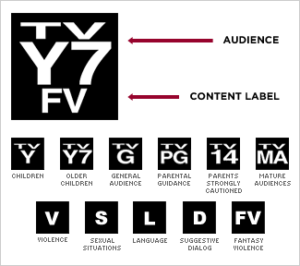 The whole reason we have content ratings is so parents have a tool to guide them in what their kids are watching. There are seven types of content ratings for television, six for video games, and just four for film. I don’t think it needs to be said that their are more than just seven, six, or four levels of maturity in these media. Children mature rapidly at young ages, and in addition, each child develops differently; on top of that, different parents are okay with their children seeing different things. This is why any rating system is not a stamp of approval, but rather the aforementioned tool for parents to use. TV-G and TV-Y are designed in such a way that any child can be left unattended and probably not see anything they shouldn’t, but the TV guidelines even say, “most parents may let younger children watch this program unattended.” Apart from those two ratings all of them encourage parents to consider whether their kids should watch. Even on TV-14, parents are warned to monitor the show very carefully, not simply let anyone 14 or older watch it. So yes, you will find things in a TV-PG or TV-14 show that some parents wouldn’t approve of. For some reason, when it comes to live action programming, people seem quick to accept this. Animation, on the other hand, gets treated a little differently. 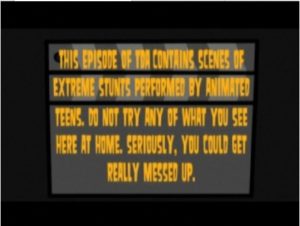 Many people assume that all cartoons are aimed at little kids, or that at most there are two kinds of cartoons: those meant for little kids, and those meant for adults. To many people the levels of adult content go straight from Blue’s Clues and Franklin to Robot Chicken and Family Guy. Now those of us who actually watch animation know that this isn’t true in the slightest, but it’s hard to explain that to a lot of people, and unfortunately a lot of parents. Anime seems to have an easier time, because for decades now Japan has been making animated programs for people of all different age demographics. So when anime started coming to America, a lot of parents didn’t know that not every anime was as child friendly as Pokemon, and then when they found things that were meant for adults, Elfen Lied for example, they began condemning anime as a whole. From the ashes of all this confusion and controversy, it seems we’ve gotten the modern animation renaissance. Now you have lots of animated series getting a TV-PG rating, as opposed to the traditional TV-Y7FV a lot of cartoons got. Because TV-PG is the only rating that doesn’t have a definite age attached to it, it raises a lot of questions. Steven Universe, Adventure Time and Regular Show all bare this rating, as did the short lived Robotomy. The last two in particular I’ve seen parents complaining that the shows should be saved for Adult Swim, the adult portion of Cartoon Network. At first this wouldn’t make any sense, but then again, King of the Hill, a TV-PG show, airs on Adult Swim. TV-PG is such a wide landscape, that there’s truly no way to say any one child can watch all TV-PG shows. Although you’d think having a higher rating would help shows, it might be hurting them. Are less people in key demographics watching Steven Universe and Adventure Time because parents worry it has the same content as The Simpsons? To those who know animation that comparison sounds ludicrous, but to many it makes perfect sense. This brings me to my plea to parents.

A Plea to Parents 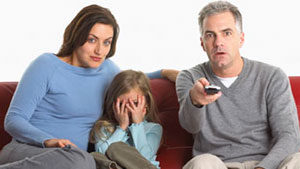 I grew up knowing there were certain shows I wasn’t allowed to watch. It’s ironic that my little brother gets to watch them, but that’s beside the point. Whenever a new show would premiere, my mom would basically decide if I could watch it. This worked fine up until I was about 15 or 16. This was when I knew I wanted to become a Communications Major, and my interests spread out. I wanted to watch all of these smaller films my mom hadn’t heard of, and of course her go to Christian review site didn’t list them, due to them not being big blockbuster movies. I basically trained myself in what all of the content descriptors meant for TV, film, and video games. I found ways to learn the content, and knowing my parent’s standards, I started deeming for myself what was acceptable (or just emailing them the IMDB parent’s guide). Over time a system formed, where I would be the parent in a situation: my parents would suggest a movie and I would be the one saying “are you sure that content’s appropriate?” I tell this story to say that my parents were still pretty culturally informed, and it frightens me what would have happened if they weren’t. TV ratings are being misused, and as such plenty of kids are either being kept from shows they could grow from, or being allowed to see things they really shouldn’t, because people don’t understand the system, and aren’t actively using it. I know the first statement sounds meaningless, but it really isn’t. We are in such a progressive age of animation, that kids are being exposed to so many things they may not see at home. I’m talking about LGBTQQIAAP themes, but also themes such as adoption, nontraditional gender roles at home, and how males and females can truly just be friends, even as teenagers. Children seeing these positive influences, not just from their parents, but from what they deem as society and culture, is a huge thing. Even beyond that, I know plenty of shows that I saw that impacted not just my imagination, but my life. Animation is why I do what I do, and seeing other kids getting that same experience means a lot to me.

I’m not saying to let your child watch everything, but just know why you’re banning them from something. Don’t do it based on another parent, or a website you’ve never heard of, or anything other than your own personal judgement. I know it might seem tedious, but at the end of the day, isn’t your child getting to see something that will broaden their horizons worth it?