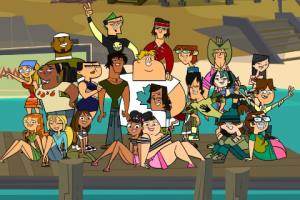 Welcome to the first weekly review of Total Drama! This is going to be a weekly series going through all of Total Drama, beginning with the season that started it all, Total Drama Island. To begin let’s do a quick rundown on what this blog series will look like. Each week I’ll recap what happened in each episode, what big moves were made, any reality show references, who was eliminated, and what role that plays on the greater franchise as a whole. I’ll be doing one episode per week, however today I’ll be looking at part one and two of the season premiere.

So we start off at good ol’ camp Wawanakwa where host Chris Mclean explains the basic premise of the show in a giant send up of Survivor. The 22 campers will be divided into two tribes, er, teams, compete in challenges where the losing team goes to tribal council, er, the marshmallow ceremony, and someone is eliminated. The first episode is mostly spent meeting the contestants. After a swap so that BFFs Katie and Sadie can stay together we meet our two teams: the Screaming Gophers made up of Lindsey, Beth, Heather, Izzy, Leshawna, Gwen, Cody, Noah, Justin, Owen, and Trent; and the Killer Bass made up of Bridgette, Eva, Courtney, Katie, Sadie, Duncan, Ezekiel, Harold, Geoff, DJ, and Tyler.

Most of these two episodes are just establishing everyone’s personality, making sure Lindsey acts dumb, Owen is loud, Justin is hot, etc, etc. It’s needed, but not exactly much to talk about. I do want to mention the confessional videos in this episode. They were actually added at the last minute in order to reach the time limit they needed. The idea turned out to be a huge hit and they kept the confessional videos throughout the entire series.

In the first challenge everyone is asked to dive off a cliff, and everyone except Beth, DJ, and Courtney do it. In the hot tub building challenge the Gophers come out on top and manage to win immunity sending the Killer Bass to the marshmallow ceremony.  Due to his sexist comments, Ezekiel ends up being the first one sent home. What’s weird is that even though Ezekiel is the first sent home a lot of fans latched onto him. In fact one of the most famous fanfics is all about what if he didn’t get sent home. So twenty-one are left now as we head into episode three. Next week we’ll dive a lot more into the plot and character bonds as the show goes on. So thanks for sticking with me through this introduction, and I hope to see you all next week…on TOTAL DRAMA ISLAND!!