How Death Note is a Modern Greek Tragedy

Death Note is one of the most recognized anime in the world and for good reason.  Death Note has wide appeal and I’m here to argue that’s because it follows one of the oldest forms of entertainment, the Greek tragedy.  In particular Light is a sort of evolution of the tragic hero: he starts at a high point, but his tragic flaw and circumstances lead to him falling and having a reversal of fortune.  Finally though he realizes his failure and reaches his end.

First Light begins as the top high school student in Japan and gets into his top school.  Light is on top of the world, and he knows it.  His whole life is right and nothing could go wrong.  His hubris begins to rear its head though.  His excessive pride comes through in the form of boredom, which leads to him obtaining the death note.  Light at first is fine with using the death note until it reveals his flaw, his idealism.  His idealism leads him to believe he can become the god of his new world, setting himself up for failure.  Everything is still going okay though even once his god complex kicks in.  Things get rocky but through it all Light is fine, it isn’t until L dies that things slowly begin turning around.  Mello slowly begins putting it all together and eventually Light completes his descent into madness.  Everything he held dear falls apart and finally he recognizes his failure and dies on the steps. 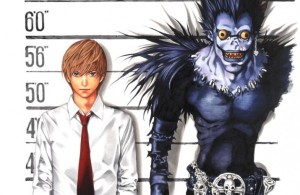 Light even has an odd form of nemesis, or divine punishment, in the form of Ryuk.  Ryuk facilitates Light’s destruction, cackling all the way.  Death Note isn’t quite traditional, as it takes place over a longer period of time than the normal Greek tragedy, but adopts many of its themes.  Looking at it through this light (haha, get it) gives the series not only an added level of beauty, but helps explain its popularity.  Hopefully this will encourage you to analyze more shows and see what styles they adopt and build upon.