I was looking through TV Tropes (always a great way to start a sentence I know) and was reading up on villains in animation to try and come up with a new piece.  As I was reading I came upon Adventure Time.  What I aim to do is show how Adventure Time ended up in this pickle, why it stands out as a rather unique situation, propose three solutions to the problem, and finally show why other shows should follow in Adventure Time’s footsteps. 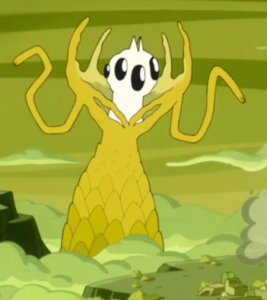 First things first, how does a show with so much planning and direction end up without a main antagonist?  Adventure Time started out with Ice King.  It had other monsters of the week, but usually Ice King showed up every few episodes and was the main enemy of Finn and Jake.  It got old really fast, with even Finn questioning why Ice King was always fighting them.  Ice King was never meant to be a true overarching villain, and if the show wanted to spread its wings it would need one.  Season two’s finale gave us that in The Lich.  The Lich was the catalyst Adventure Time needed.  His introduction led to the show expanding its lore, taking on heavier plots, and having a truly monstrous threat to loom over its heroes.  For a few seasons the Lich was a great villain, but then the show made the bold choice to force him to turn good, leaving the show once again with no antagonist but much more momentum and plotlines than before.  Quickly the show gave us two new threats, the King of Ooo and the impending comet.  The comet, while not a villain in and of itself, gave us something to dread, and was always lingering throughout season six.  The King of Ooo meanwhile was slowly building up his reputation, and in the season six finale we saw the comet and King of Ooo storylines come to a head as well as the recently introduced Orgalorg.  The comet situation was resolved and Orgalorg was more or less defeated and soon after the King of Ooo was as well.  With Stakes having its own antagonist and wrapping that arc up, the show is currently villainless.

Now shows have been without primary antagonists before, that’s nothing special.  Some shows introduce new villains every season, and for a couple of episodes there is no true threat looming.  Other shows don’t really need to worry about primary antagonists because the whole show is episodic and formulaic.  Unfortunately Adventure Time is a lot more serial than many other Cartoon Network shows, and as such it does constantly have to worry about its antagonist because conflict keeps the show in momentum.  They can take a few weeks to explore side characters, but if Adventure Time wants to keep going it will need to find footing with a new villain.  If Adventure Time did this, starting with a new villain, every season up to this point, we wouldn’t really be worried.  However they didn’t, they’ve only switched their main antagonist a couple of times and they’re on season seven.  That’s what makes this so unprecedented, the show is having to enter a new era, and they can’t simply keep using long running villains anymore. 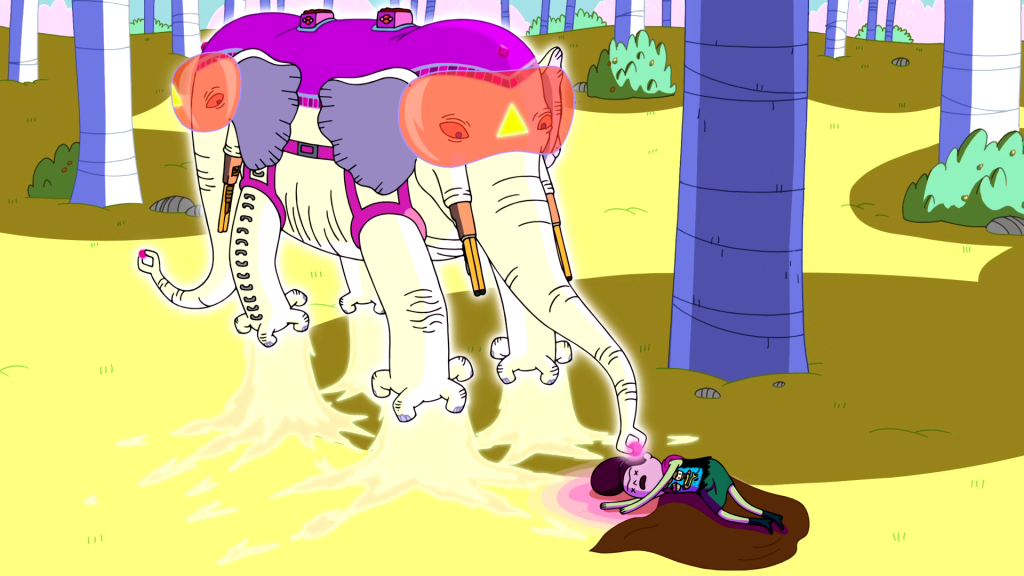 So how will they fill the gap?  There are certainly bad characters still running around Ooo; Ice King, Lemongrab (I think?), even Orgalorg in the form of Gunter.  The issue though is Ice King and Lemongrab have become too sympathetic to be seen as truly evil entities.  They both have become more heroic as of late albeit a bit pathetic.  Orgalorg on the other hand, while still truly evil, was beaten rather quickly, and it would be hard to build him up as a threat again.  So with that it needs to be a character who has not yet been redeemed.  One such character is Maja the Sky Witch.  We’ve only seen her in two big episodes, and the last one saw her teaming up potentially with the Ancient Psychic Tandem War Elephant.  Maja being the villain would really rile up both Bubblegum and Marceline, and would make for a much more grounded antagonist compared to Orgalorg and The Lich.

The second, more human option, would be Finn’s father.  So far Martin has been shown to be a complete failure, and absolutely terrible Father, and now he has the power of a god.  That can’t be good, and I guarantee in this season we’ll see that explored, that’s not a question.  The question is whether that will be the main conflict of the season, and it’s a pretty valid option.  Making Martin the antagonist gives Finn a greater stake in the fight, and he’s one of the few characters who could balance both personal importance to Finn and importance to the world.  Martin is a more logical choice than Maja chronologically, but he could be reduced to a secondary antagonist by something else.

And that something else is the third option for a villain.  Something completely out of the blue we haven’t seen yet, or has only been mentioned for a split second.  Think about the Lich, we heard about him for a split second, and then the first time he appeared he became the main antagonist.  Same goes for Orgalorg.  Adventure Time has a habit of creating its antagonists out of nowhere, yet allowing them to fit perfectly in the show’s lore.  It’s very possible we’ll see the show do that again this season.

So at first glance it would seem Adventure Time not having a villain is not a problem, but rather it’s the show’s biggest strength right now.  This season of Adventure Time will be anything but predictable, and other shows should follow suit.  For most cartoons it’s expected who the heroes will end up fighting, and when that person is finally beaten the show ends.  Adventure Time’s universe isn’t just what we see on screen though, it’s alive and growing, and as such there are more enemies and just because one is beaten it doesn’t mean life stops.  Other shows should put themselves in situations like this, letting long established villains die in favor of new ones. It’s risky sure, but it shows a more realistic world, and audiences will be better able to lose themselves not just in the show but that world.

No matter what Adventure Time does I’m sure it will find footing with a new villain,and continue being one of the most expansive shows on television.