The Hidden Gem of “Miles From Tomorrowland”

So if you don’t have a younger sibling or child you may not be paying attention to Disney Junior, which has surprisingly improved its line-up over the last year.  If you aren’t you’re missing out on a show I admit I would have missed too, Miles From Tomorrowland.  If you haven’t heard of it imagine the family astronaut situation of Lost in Space mixed with the exploration concept of Star Trek set in Disney’s Tomorrowland (not tied to the movie to the best of my knowledge and trust me this show is ten times better).

Before getting to the big stuff that pushes the show into the realm of unmissable, I want to touch on what makes it great.  First off the premise, the show is kid friendly but doesn’t dumb down.  It has the same sense of discovery and diplomacy as Star Trek, and doesn’t force its morals any harder than it should.  Second, the cast; the kids of the family, Miles and Loretta Callisto are voiced by pretty much unknown child actors, who both do a pretty good job.  The parents however, Phoebe and Leo Callisto are voiced by Olivia Munn from the Daily Show and Tom Kenny from Adventure Time.  They absolutely knock it out of the park, and if just those two big names were brought in the show would have a stellar cast, but listen to the recurring cast.  Mark Hamill, George Takei, Bill Nye, Will Wheaton, Alton Brown, Brenda Song, and Dee Bradley Baker (who also plays the family’s robot ostrich) as well as Grey Griffin who plays the family’s computer. 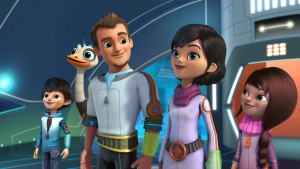 The story strongly echoes everything from 2001: A Space Odyssey to the aforementioned Star Trek and Lost in Space.  What truly makes the show stand out though is the way it handles family roles.  Miles, the son, mostly just flies around on his blastboard and tries to help out and explore.  Loretta, the daughter, is a tech wiz and can program like nobody’s business.  Leo, the father, is typically the pilot and engineer.  Finally Phoebe, the mother and all around great role model, is the captain of the ship.  Instead of the father always being the head of the family, or the mother always taking charge, both equally share the responsibility of running the family.  Outside the ship they interact like a normal family would in real life, operating as a family unit rather than a patriarchy or matriarchy.  It’s something we never really see especially in children’s programming, but it’s the on ship roles that also set the show apart. No one questions Phoebe’s role as both a mother and captain of a star ship, nobody, not a single person thinks anything of it; which is exactly how life should be.  No one thinks Loretta shouldn’t program, no one tells Leo he’s a wimp for not being the head of his family.  I think the fact that the show takes place on Disney Junior, which is meant to be appropriate for young children, really benefits it.  It allows the show to normalize so many things that otherwise would be questioned.

So if you like seeing strong female role models and haven’t checked this show out, do yourself a favor and watch an episode or two, don’t let the Disney Junior label keep you away.