Adventure Time: Varmints. Marceline and Bonnibel Sitting in a Tree.

Jumping right in we have our pal Marceline. She’s humming “I’m Just Your Problem”. The song that launched Bubbline into our hearts. Anyway she’s humming it onto the way to the Candy Kingdom to hang out with Bubblegum. But she didn’t know that the King of Ooo is now princess. He sleeps in a Bubblegum wig and her nightgown. He’s like “lol Marceline tell erryone”. 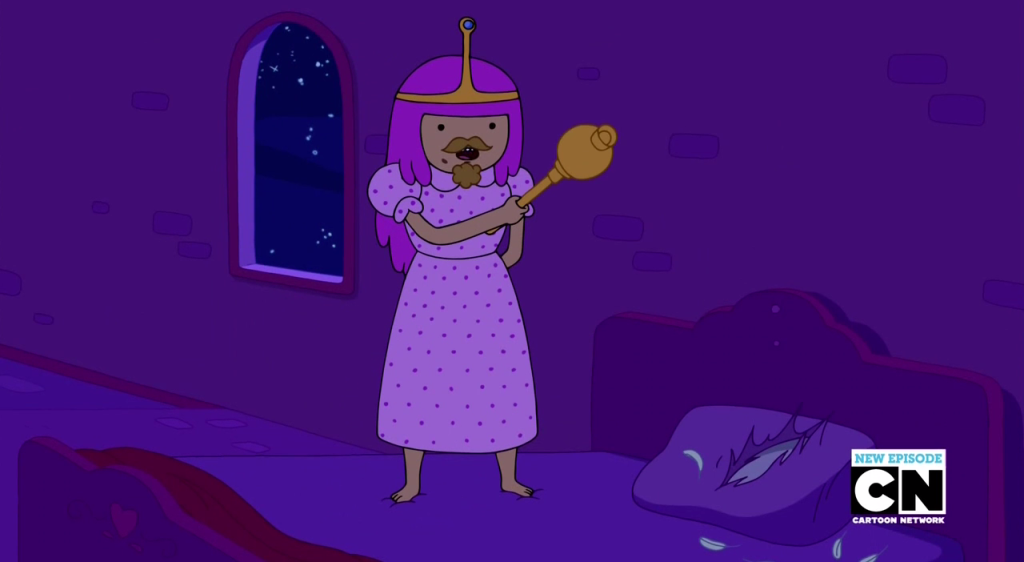 How many licks does it take to get to the tootsie roll center of a tootsie pop? I’ve been licking this all day and I lost count tbh.

Bubblegum didn’t tell Marceline that she’d been out of office. For two months. Man. Marcy’s pissed. She goes and finds the actual Bubblegum. There’s a little banjo diddy that plays that I really like, with Bubblegum sitting on her porch. Anyway. Marcy comes up and she’s like “dude wtf?” and Bubblegum’s like “yeah sry. my pride was hurt.” Also Bubblegum and Peppermint Butler have laser blasters that look just like shotguns and I wonder how that slid past the higher ups.

So Bubblegum is being all “VARMINTS!” and she talks about trying to be less of a mean person which I like. Character development cabin. There’s some teethy guys that are eating her pumpkins; citizens of her “garden kingdom”. They’re pumpkins. But whatever Bonnie, it’s your life. She and Marceline chase after these guys into the rock candy mines and it’s all nostalgia. 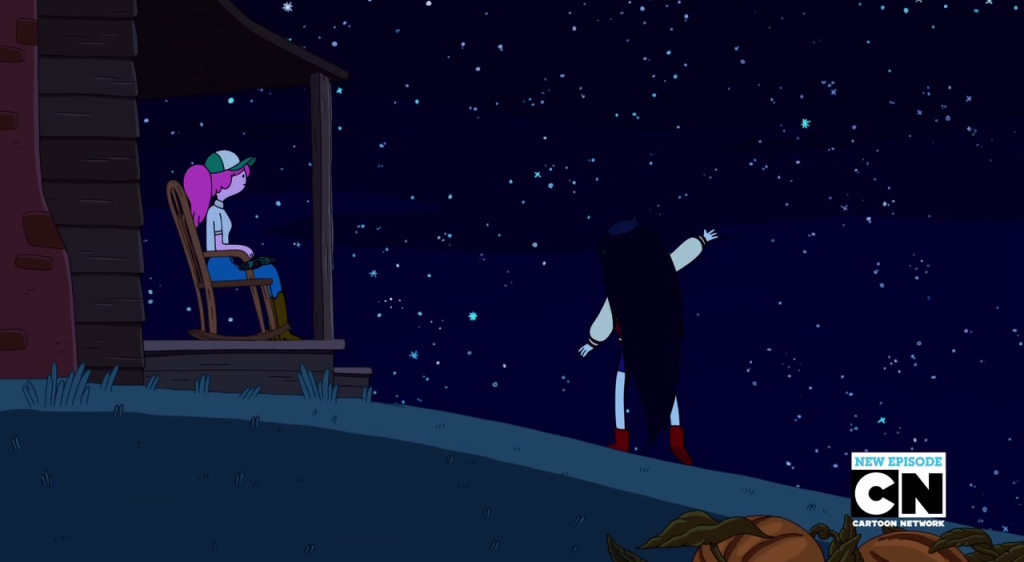 Look at all those stars. I mean dang Bonnie. Get a load of those stars. Shall I compare thee to a summer’s night? No cause you don’t got all these stars.

Ya see, Marceline used to sneek Bubblegum down here back in the day to ditch meetings with the Cheese Kingdom. They did some graffiti, jumped over some endless pits, they had a good time. But good times couldn’t be had for long. Bubblegum had to take care of her ever growing kingdom. She got busy. Marceline asks if that’s why Bubblegum stopped talking to her. Before anyone with actual words could respond, varmints take the mic. Bubbline try to fight’em off but they get trapped in a little room instead. 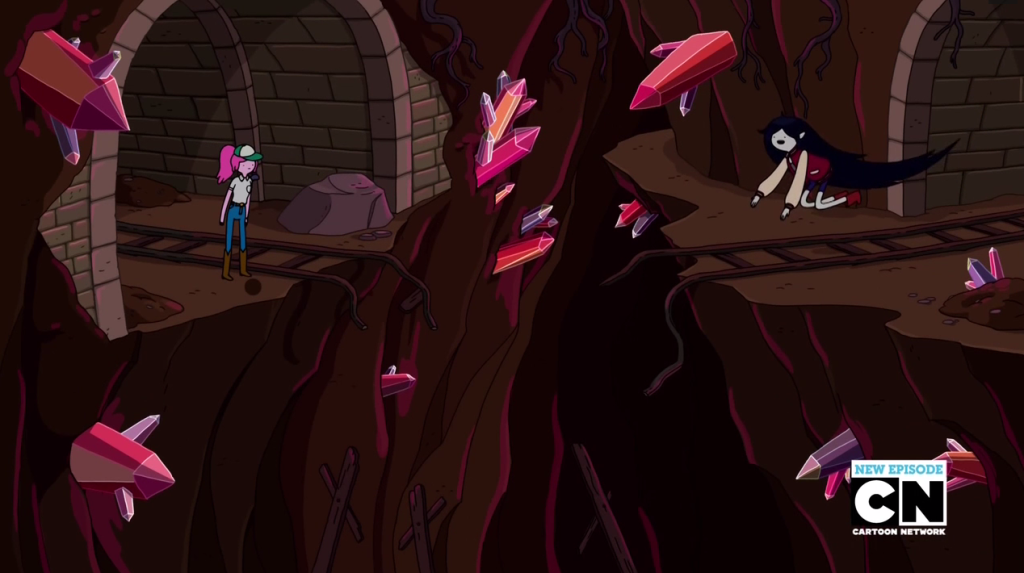 Hmm…this is a metaphor for something….but what…

What do they find in this room but a tag that Bubblegum did long ago? They also find their feelings. Bubblegum starts crying upon finding the tag. Marcy thinks it’s because she was making fun of her handwriting and takes it back, saying with a blush that she thinks her handwriting is really pretty. 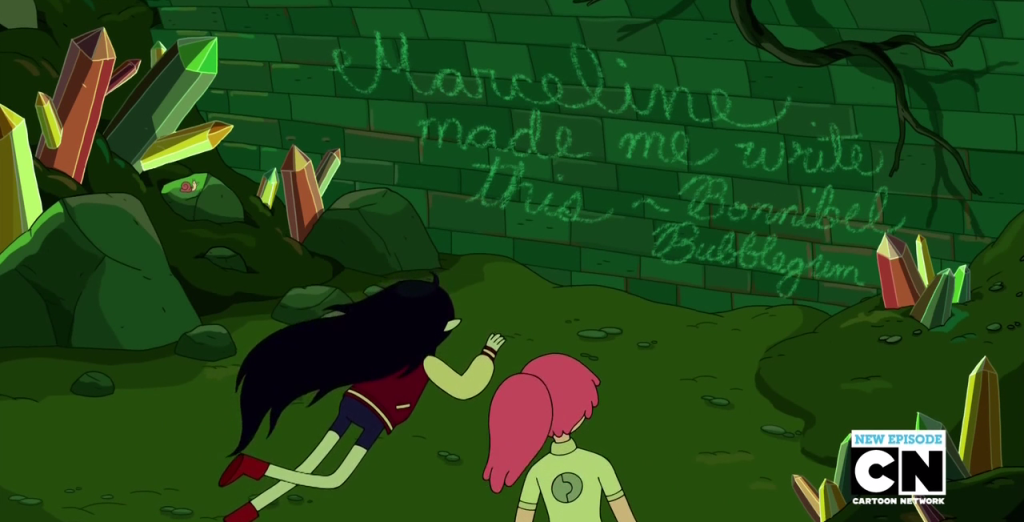 Y’know I heard they’re not gonna teach kids how to write in cursive anymore? Dang common curriculum. No one will have pretty handwriting ever again.

Bonnie is like “No. I lost my hat. My home. My people. etc. etc. etc. etc. I lost a lot of stuff and I’m real sad about it okay?” She’s crying. She really tried to make things good, hold it together. But she’s a sentient piece of gum. Gum can’t hold things together very well, especially not if they’re all moving and sentient. Should’ve tried some epoxy or wood glue or something else. Anyway. She thought if she focused on work it’d all be okay and she wouldn’t be crying in a mine shaft with her ex-girlfriend about to be eaten by tooth guys and/or killed by rock candy falling down. But now look where we are. We’re at exactly that place. 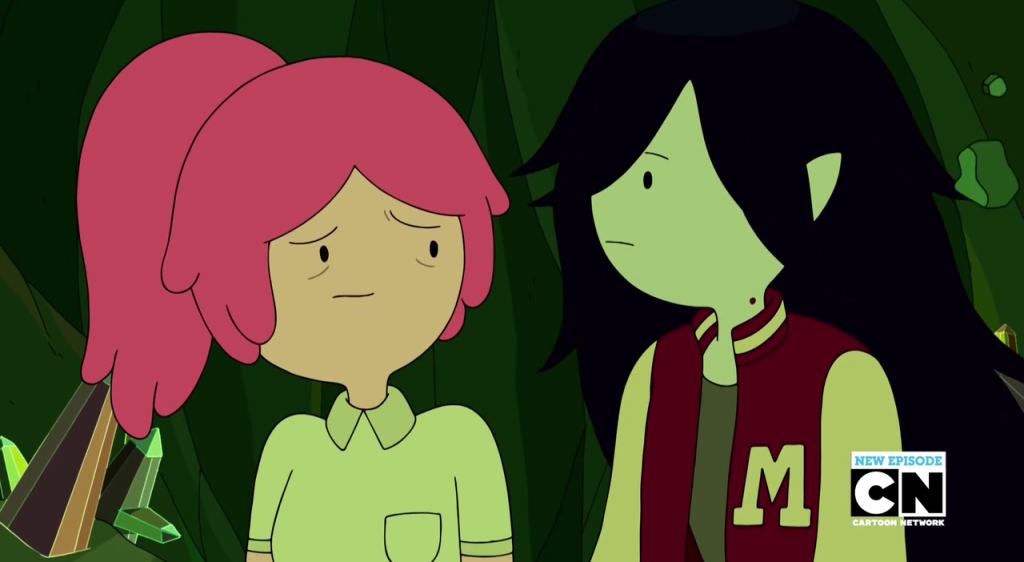 All she ever did was push people away in the process of trying to be glue. She pushed Marceline away. She apologizes and Marcy is like, “dude wtf are you even apologizing for?” Aw. 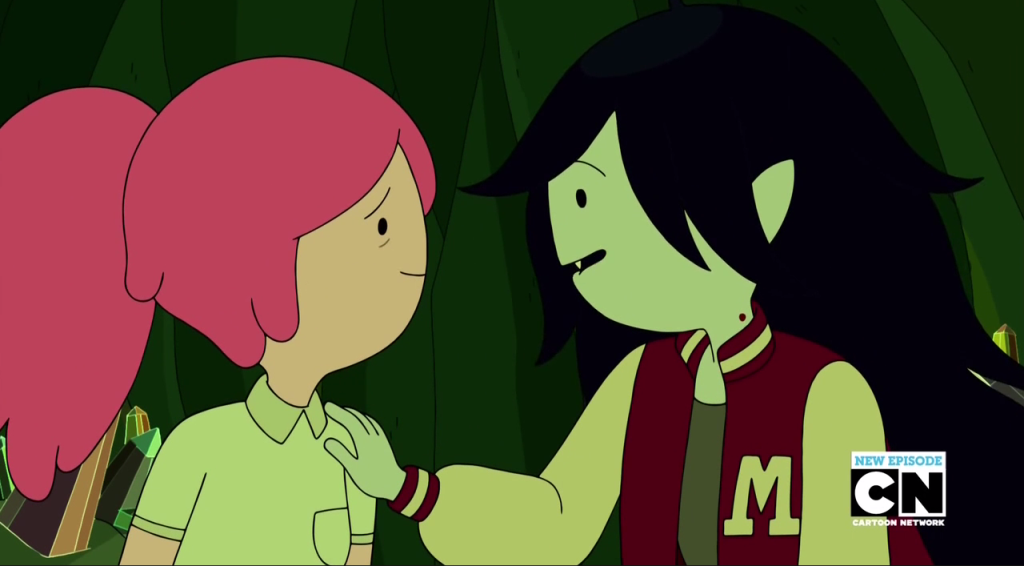 The varmint toothy guys break in. Marceline is like I got this and burrows a way out with her shapeshifting hand, messing up Bubblegum’s tag in the process. It’s all good though. They escape. Have a little moment about being tired on Bonnie’s porch. Then Marcy is all like, “Hey I’m nocturnal I’ll watch your pumpkin patch for varmints go to bed” and Bonnie’s all like “okay 15 mins then wake me up” and she proceeds to fall asleep on Marceline’s shoulder. 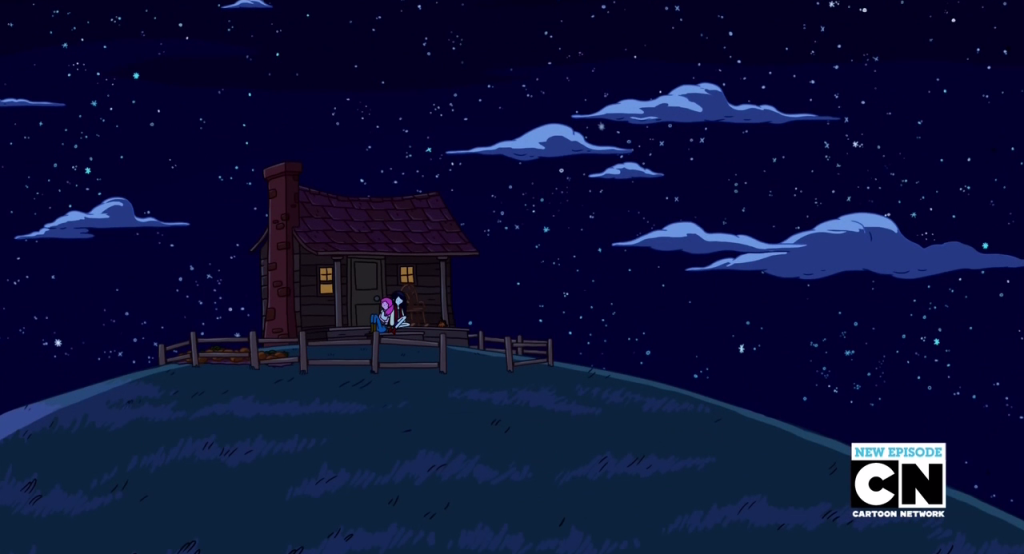 Look at all these dang stars. Like wow. I am a spec in the universe as these stars are to me. Specs of dust in the night sky. Or maybe glitter?

Something that struck me was the relationship this episode has to “What Was Missing”. That episode is just about what started the Bubbline ship (aka Sugarless Gum aka MarcelinexPB). Marceline humming “I’m Just Your Problem”, Bonnie apologizing to Marcy (aka making up as Marcy wanted to in the song). It feels like we’ve come full circle. She drank the red from her pretty pink face (“Red Starved”). They made up. So. Will they ever date again? Did they even have a romantic relationship in the past? What’s up?

I ship this ship. It’s in my tracked tags. Fanfic is in my bookmarks. The comics (the main series, Marceline and the Scream Queens, Marceline Gone Adrift) all but flat out say the words “THESE TWO ARE IN LOVE WITH EACH OTHER AND KISS EACH OTHER ALL THE TIME OR AT LEASE THEY DID/WANT TO RN.” Seriously these kids are always giving each other googly eyes or being cut off from having a confession to one another or blushing at each other or something. The show itself is a little more subtle, somehow. It feels like two exes trying to salvage a friendship out of the ashes of a romantic relationship, maybe not two people who are still clearly in love that the comics show. But the chemistry and the tenderness is still there in moving pictures. There is still love.

I wonder where we’re going to go from here. We have Stakes coming up and Bubblegum is def a main player. I mean she’s riding bat!Marceline in the intro, she’s in the official descriptions. I wonder if anything is going to happen. I wonder if shows like The Legend of Korra or Steven Universe have helped in trying to make this relationship more than a section of backstory that is hinted at but never outright stated. It’s 2015. It’s time for some queer representation without trying to sweep it under the rug. I can only hope that there’s a push forward in their relationship. The tension that they were set up with, for all intents and purposes, is resolved by this episode. So it’s either keep moving or stay in friendship land. We’ll see I guess. Cartoon Network seems like the most ~progressive~ of the big three (CN, Nick, and Disney). I mean they let Bonnie and Peppermint Butler have what were basically shotguns tonight. Peppermint Butler threatened to shoot Marceline! If we can have, at times uncalled for, violence in our shows I don’t see why we can’t have some queer relationships. I think more people have been hurt by violence than they have by love.

Also Bubblegum is wearing a snapback in this episode. A SNAPBACK. Come on. If there was ever a transparent nod to current queer culture that is it.

Tomorrow is “Cherry Cream Soda”. I don’t like that kind of soda. The only soda I like is root beer. Maybe see you then.