My late 1800’s history isn’t the greatest, but today I learned that the king of Belgium wanted to have a colony in Africa and feel big and important like the other European powers. As such, he colonized what is now known as the Democratic Republic of the Congo. This Magnificent Cake is a telling of that colonization, kinda. This movie is much more about people and the overall negative consequences of colonization than it is about King Leopold II. 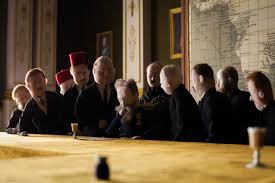 So what is this movie? It is a 45 minute stop-motion anthology containing five tales revolving around Belgium and what was then called the Congo Free State. The movie’s title comes from a statement by King Leopold II, who said “I do not want to miss a good chance of getting us a slice of this magnificent African cake.” The film begins with a story about Leopold, and paints him as a rather wimpy figure. He pees himself in his sleep, is washed by his servant for no reason other than he is too lazy to do it himself, and the climax sees him tell a clarinet player to stop performing because he apparently does not like wind instruments, despite the clarinet being a crucial part of the piece.

The movie then shifts and follows the first native person of the Congo Free State to work for the Europeans, and he is literally an ash tray. He has an ash tray for cigarette butts strapped to his head and the patrons of the fancy hotel the Europeans set up put out their cigarettes on it. He is trying to get just a bit of food for his sick mother, but is killed by a falling piano pushed by a bratty child. This morbid, cynical, and at times darkly comedic tone is present throughout the film. This movie borders on absurdist at times, and that’s the point. Imperialism is a dark, absurd concept, and this movie sees fit to rip apart everyone involved in it and show how it punishes those trapped in it. 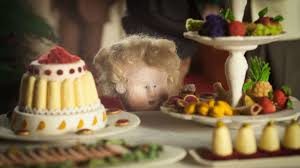 The third tale follows a man who sets off on a great adventure dragging behind him a group of slaves. He drops a banana peel behind him on a bridge causing the slave in front to slip and fall dragging everyone behind him. The European man then yells at them for not watching where they were going. He then ends up falling in love with a snail he puts his toupee on. Again, this movie is absurd. I won’t spoil the end of the third scene or any of the last two because honestly you wouldn’t believe me if I told you. At this point you should know if this a movie you would want to watch. It does depict slavery honestly, and there are a couple of disturbing scenes throughout the movie. 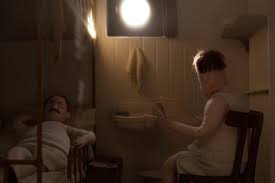 The most fascinating aspect of the movie to me is just how they do the stop-motion. Everything is felt, and I mean everything. I have never seen fuzzy water until this movie, but now I have. It can be a bit unsettling at first, but it works very well and is a change of pace from the usual clay look of stop-motion. Not that there’s anything wrong with that look, but it is nice to see it changed up a bit. This was a very odd film to watch, but very worthwhile. It’s not exactly light viewing, but I did laugh a few times at its absurd, surrealist humor. This is a very arthouse movie, and does not overstay its welcome. I would recommend this film.

This Magnificent Cake is currently in select theaters and should be arriving on Demand and home media soon.