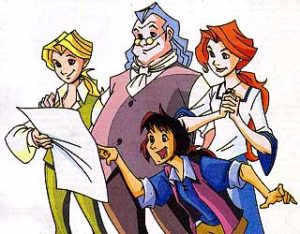 A couple weeks ago I found the complete season of Liberty’s Kids at Walmart for ten bucks. As soon as I clapped eyes on it I was immediately awash with intense nostalgia. Next thing I knew, I was the happy owner of said DVDs. Independence Day was right around the corner, what better time to rewatch a show that follows young people as they live through the events of the Revolutionary War?

Honestly, I didn’t remember a lot of specifics about the show. I knew without a doubt that the theme song was the real deal to 2002 Victoria. I remember that my favorite part was the commercial breaks when PBS would run a “Now and Then” segment where the characters from the show would illustrate the differences between life now and the 18th century. I also distinctly remember not knowing who I had a bigger crush on, James or Sarah.

Upon rewatching, I was surprised by some things and disappointed by others. The animation which I once thought was the bomb dot com, now looked pretty “meh” to me. For the first few episodes, I was actually annoyed by all the characters. Their personalities were so exaggerated, probably to establish their roles in the show but watching now, it felt way over kill. Sarah was very much a stuck up city girl, loyal only to the crown and James was pretty much just a dumb jerk. As the episodes continued though, they seemed much more toned down and well rounded. James gains some wisdom and maturity while Sarah grows respect and a more tempered view of the new world. Henri is just kinda there.

A really interesting aspect of the show was actually how timely it is to today. The kids, Sarah, James, and Henri, are all under the care of Benjamin Franklin and help run the printing press for the Pennsylvania Gazette. This brings up the topic of journalism quite a bit, while the newspaper itself, the upcoming media of the time, comes regularly under criticism. James helps report for the paper and wants to be a full blown journalist someday. There are quite a few discussions about biased reporting as well as debates as to what are morally acceptable ways to gather information. In one conversation, Moses, the main authority figure for the kids, warns James that what he’s writing is false news. Sarah soon decides to also report for the paper, from her perspective. They both write on the same events, James from his fiery rebel standpoint, and Sarah from that of a British sympathizer.

Watching was a good way to brush up on my history too. I knew things were in shambles during this time period, I mean, I’ve listened to Hamilton like everyone else, but it’s another thing to watch it in a kids show. The colonists rioting, rallying, losing battle after battle and finally the long fought victory. Only to be followed by the total chaos of the country afterward. There was such political upheaval and everyone was just pissed in general at the government that they fought so hard to get. Honestly none of this impacted me as a kid, I was more like what?!? They had to go the bathroom outside and use leeches for medical, holy crap!!

I quite enjoyed rewatching Liberty’s Kids. I’m just as tired and cynical about this country as the next guy right now, so it was nice to take a little breather and see that America was basically always a mess in some form or another. And sometimes the show you thought was the greatest thing since sliced bread as a kid, maybe isn’t as amazing when you grow up and that’s ok. One thing remains the same though, that theme song is still pretty dang good.