A Meditation on Butch Identity in Animation and Life

Years ago, I was asked a question that left me a bit at a loss. A coworker and I were passing time, trying to move the clock further along to the end of the shift, and she asked me rather bluntly, “When did you first start being like that?”

I knew what she meant: like a lesbian, more specifically a butch lesbian. It wasn’t asked mockingly, just genuine curiosity. I gave her the best answer I could, that I didn’t wake up one day and decide to shave my head and play softball, that I’d always been like that even before I knew I liked girls.

My mom would say as I was growing up that I was a tomboy. I lived in baggy jean shorts and hoodies, I had dreams of being a professional skateboarder or baseball player. I idolized my action figures and would cut all my Barbies’ hair off. My sisters would tease and call me “Moose”, the name of the boyish little sister of Disney’s eponymous Pepper Ann. I thought Moose was so cool that I didn’t care that they meant it in a bad way, that I was too much like a boy for their liking. Moose was great at sports and everyone in the show thought she was awesome, what was wrong with that? 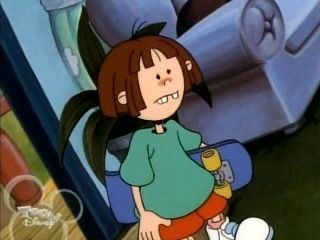 There was something wrong with that to a lot of people it turns out. I grew up and didn’t develop an interest in makeup and dresses and dating boys. I chopped my long hair off after desperately trying to compress it in a military style bun for years, and I wore black band t-shirts with a scowl. My family didn’t know what to do with me and strangers would call me every name in the book wherever I went. And while my coming out later on was the biggest “duh” uttered in the universe, I didn’t really feel like I fit in with the other lesbians, I was too butch. Too much of a stereotype for others’ approval, even within my own community. I still feel that way nearly every day of my life. 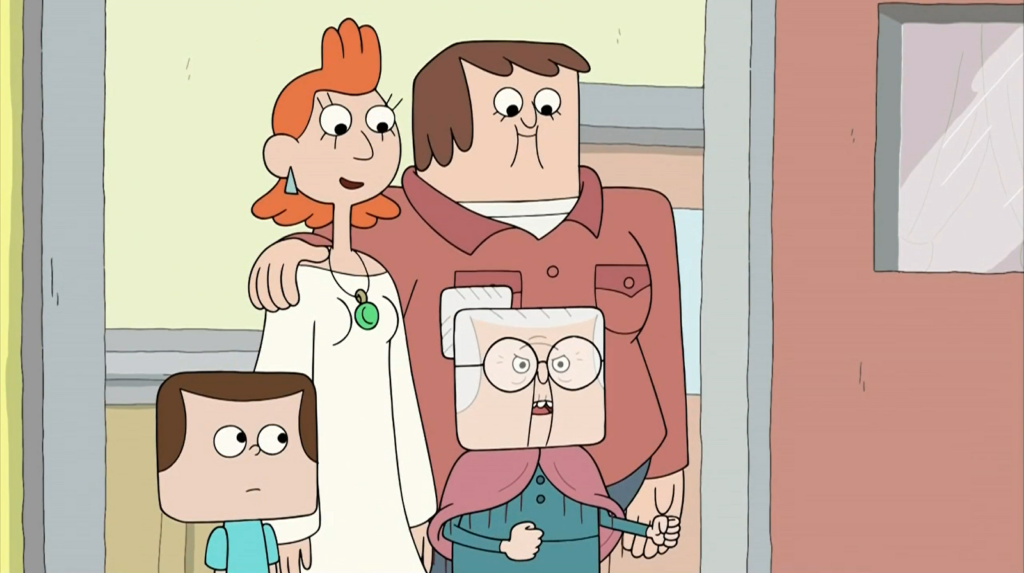 When we talk about queer representation, we talk about having positive images of ourselves. But that is hardly ever the case if you’re butch. We’re lucky if we get a completely degrading picture in a streaming service show of some misogynistic jerk lady who sleeps with straight girls in an attempt to “turn” them. Luckily there’s live action shows out there like Vida that have a wide variety of presentation, but as great as it is it’s hardly enough. And butches in animation? Way back when there was a whole episode of Cow and Chicken called “Buffalo Gals” dedicated to showcasing a bunch of lesbian stereotypes in a negative light, including being butch, that aired exactly once until complaints rolled in. There’s that one mom in Clarence, maybe Scorpia and a few minor characters in She-Ra, maybe Ruby or Jasper or Topaz in Steven Universe, maybe Reggie or Kathy in Twelve Forever? Generally the tomboy characters always get interested in boys eventually and queer real estate is saved for more gender conforming characters who don’t enforce the idea that one day your daughter might grow up to be a bulldagger. And when a butch woman does appear, they’re white. Or not human.

These days you’ll see the phenomenon of “discount lesbians” in animation, meaning that these are female coded/stated characters who are in love with other such characters but…they’re aliens, cat people, sentient bubblegum wads. And somehow there doesn’t seem to be much room for different gender expressions when you’re working with beings that aren’t human. Characters who aren’t human, let alone live on the same Earth that we do, are made to conform to human societal understandings of sexuality and gender. Obviously that’s something that’s pretty inescapable, given that everyone involved with these pieces of media are humans on earth. It’s something that gives me a sinking feeling in my stomach. If the lesbians we’re going to have aren’t human, they still have to be palpably feminine enough for a general audience. 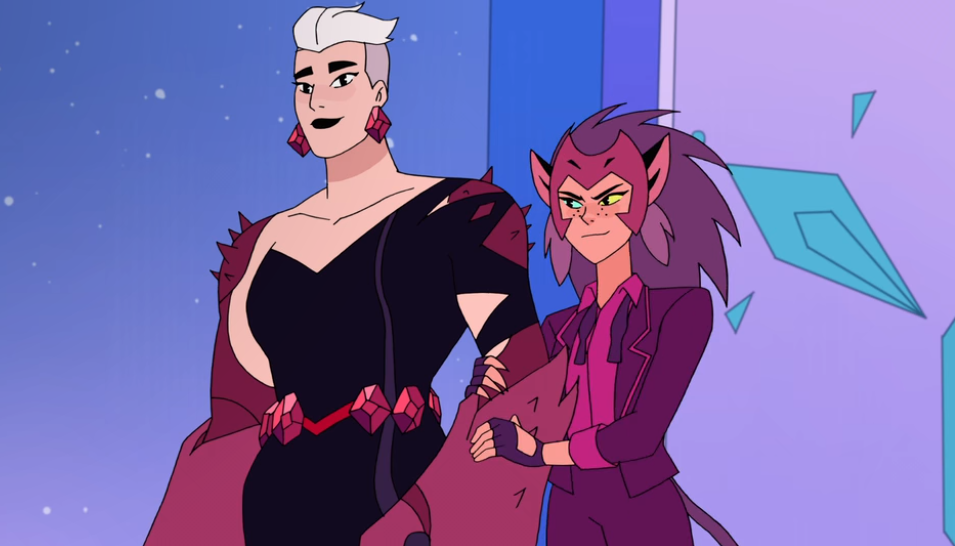 I go back and forth on whether or not the absence of butch characters is worth being angry about. We have crews full of queer people working on She-Ra, Steven Universe, etc. doing their best with the restrictions they have. There’s other important things to focus on, like trying to break through with trans characters, trying to push for more overt depictions of sexuality other than hetero, trying to push for more racial diversity. It feels a bit silly sitting here being angry about something like Ruby or Scorpia wearing dresses given the gravity of everything else happening in the animation industry. People seem happy with the level of representation we’ve gotten thus far. I’m usually okay with it. But sometimes it can get to be a glaring issue. Because I’m a living person and I don’t know where I belong in fiction, let alone the world. Is there anything for me out there? 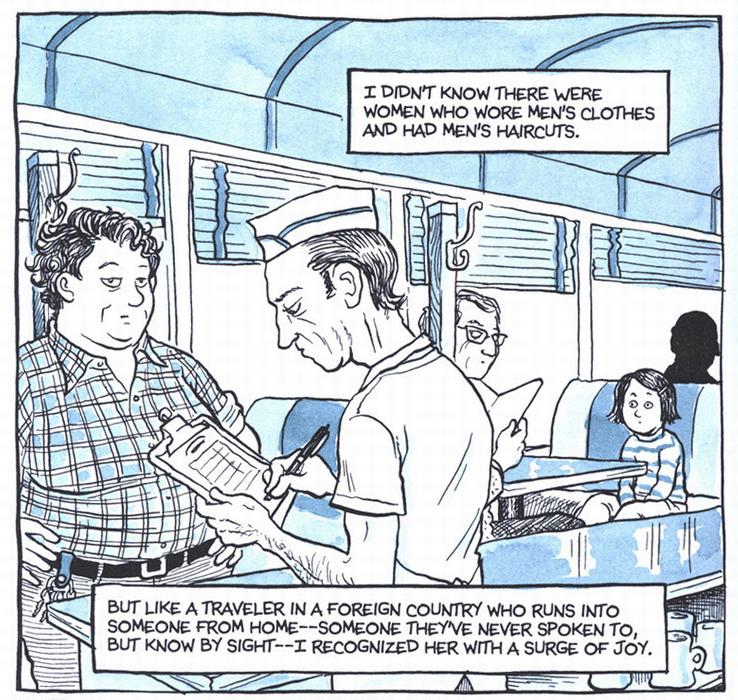 There’s this graphic novel called Fun Home by cartoonist Alison Bechdel. In it there’s a panel where Alison writes about seeing a butch woman for the first time when she was a kid. I think about this panel all the time. To me it’s an affirmation that tells me to keep being myself in public spaces even though it’s hard, because maybe someone will see me and feel like they can present how they want to too. It’s this perfect shorthand for why representation is good. Because someone out there will see it and it will change their life for the better. It feels good to see people like you in the media you consume, it’s a sign that there are people like you out in the world. There are other butches in the world, I’ve seen them with my eyes. But they’re not on the television or in movies. Not in video games, the stage, but maybe a little bit in books if you know where to look. They’re missing and nowhere to be found. If only the beautiful electricity I feel when I see someone who looks like me in public could be felt in watching the newest animated show we’re podcasting about here. I’m not sure when it’ll ever be like that. But maybe bringing this to light is a start.