Something I’ve complained about for years is the lack of LGBTQ+ representation in animation. And down from the heavens of my Netflix recommendations came this super stylized adult animated show about super hero drag queens! Five episodes at 22 minutes each? Perfect for a midnight binge! I was a bit cautious at first: usually when the worlds of “adult animation” and gay culture mix, it’s a terrible negative stereotype-fest that only serves as a way for people to make “lol aren’t the homosexuals perverse and weird” jokes. But within the first five minutes of Super Drags, I was all-in for the ride. 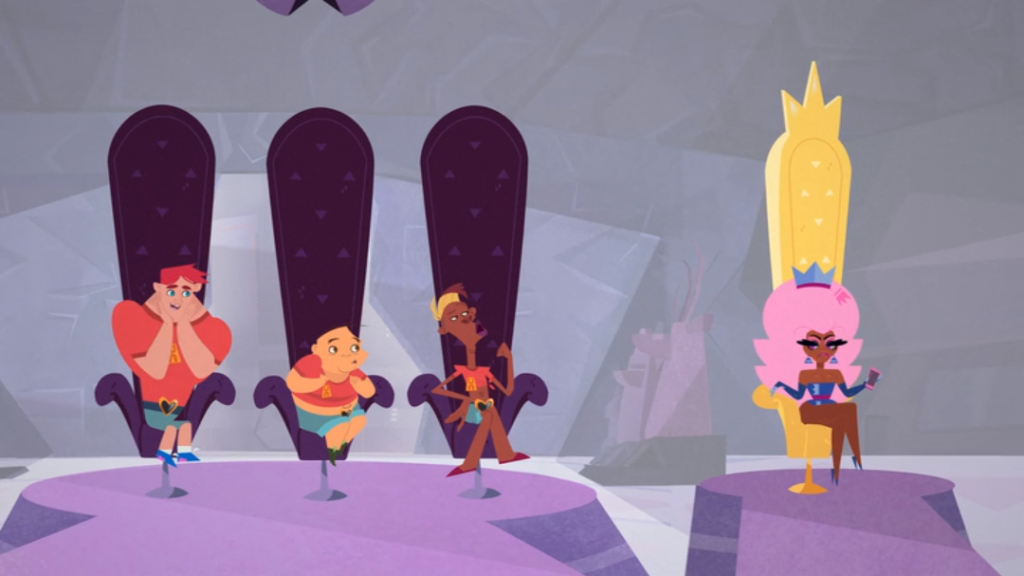 Super Drags is the tale of…well, the Super Drags. Patrick, Donizete, and Ralph are not-so-secretly magical girl drag queens and alongside the superstar singer Goldiva and the boss Champagne it’s their mission is to stop the evil Lady Elza from sucking up every gay’s “highlight” (that is, the spark inside us that makes us special). From the Brazilian studio Combo Estúdio, the English dub features the talents of Ginger Minj, Rod Keller, Shangela, Willam, Jeff Manabat, and Trixie Mattel. It can get incredibly raunchy in its humor and I almost want to go back and count how many penis outlines and/or phallic symbols are in each episode, but I think the key thing here is that it isn’t making fun of any of the gay characters, it’s more shedding light on different points in the community and reads as a fun inside joke. 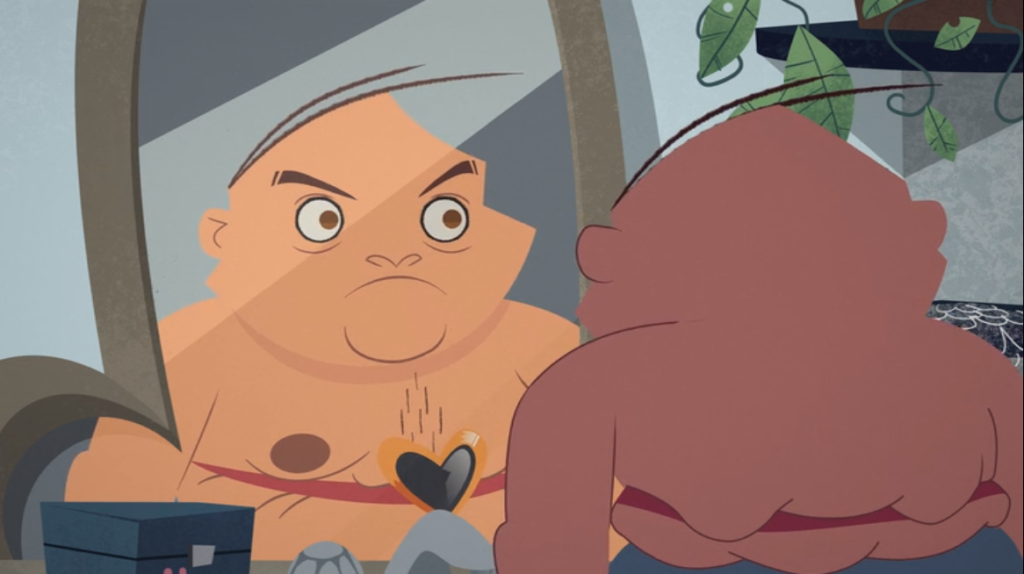 One of the stand out episodes for me was the second of this season, “Image is Everything.” Its primary focus is on Patrick, who isn’t painted as “traditionally” attractive. He’s fat, bald, too flamboyant and he tries to cover those things up on dating apps in order to find someone who will like him. He gets rejected at the start of the episode by this beauty of a tattooed, ripped photographer and it sends him spiraling down to the point where he can’t participate in the monster battle of the episode. In front of the mirror, he puts on a wig of short brown hair and blue eye contacts, duct tapes his fat into a more buff shape and gets a date with a hunky doctor that doesn’t go so well. It explores the ideas of what harms the masc4masc mentality bring, online dating, and how you shouldn’t base your self worth on whether or not someone finds you attractive. And that message rattles all throughout the community, that you aren’t supposed to be “stereotypical” and you should strive to look and act more in line with the rigid gender binary. You don’t want to be one of those gays, do you? Well, Patrick is and he becomes proud of it. He is who he is and he shouldn’t have to change in order to fit people’s ideal of the “perfect gay.” I’m on a similar point in the spectrum as a butch lesbian and it was tear-inducing to see that issue be addressed. I spent so long trying not to be like that, I didn’t want to be stereotypical. But there’s nothing wrong with being that way and I wish I could go back and show my 19 year old self this episode.

The show touches on a good amount of heavy topics with surprising grace. There’s an episode that deals with a gay conversion camp with really funny elements but also a real sensitivity to the situation, and another one that deals with being poor, gay, and black and the sacrifices one has to make in that situation in order to pay the bills that walks the same line of funny and real. While there is a lot of humor that can miss (there is a metric ton of sex references that I thought got a little bit out of hand), at the end of the day the show is all about loving yourself and your friends, neighbors, and family that you’re connected to. That the LGBTQ+ community, despite all the issues and fighting within itself, are a family and our combined support for one another is stronger than any opposition we may face. 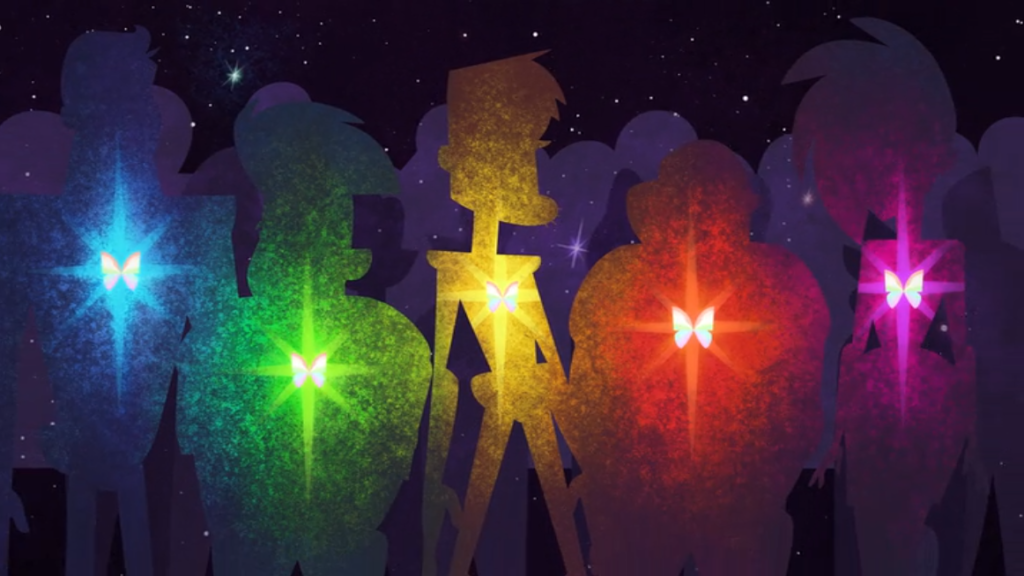 It’s an incredible message that has rarely been brought up even within our own media. For example, you can look at any movie about/by gay people and there’s always going to be some sort of negative trait that defines all of an identity. Lesbians are humorless and serious man haters, gay men are swishy and obsessed with sex, bisexuals are indecisive and are just secretly straight people experimenting, and trans people, if they exist at all, are “deceptive” because they can pass as cis. It’s not good when we’re all separated and hating each other because of what we’ve been fed to think. We need each other now more than ever, and we need to give each other a fair shot before we all start throwing harmful and untrue stereotypes around as to why we don’t want to associate with someone. The different letters in the acronym all have different issues that affect them: a cis white gay man won’t have the same challenges as a trans black woman. But we need to stand in solidarity with one another and show up for each other when we have troubles. That’s what makes us a community. 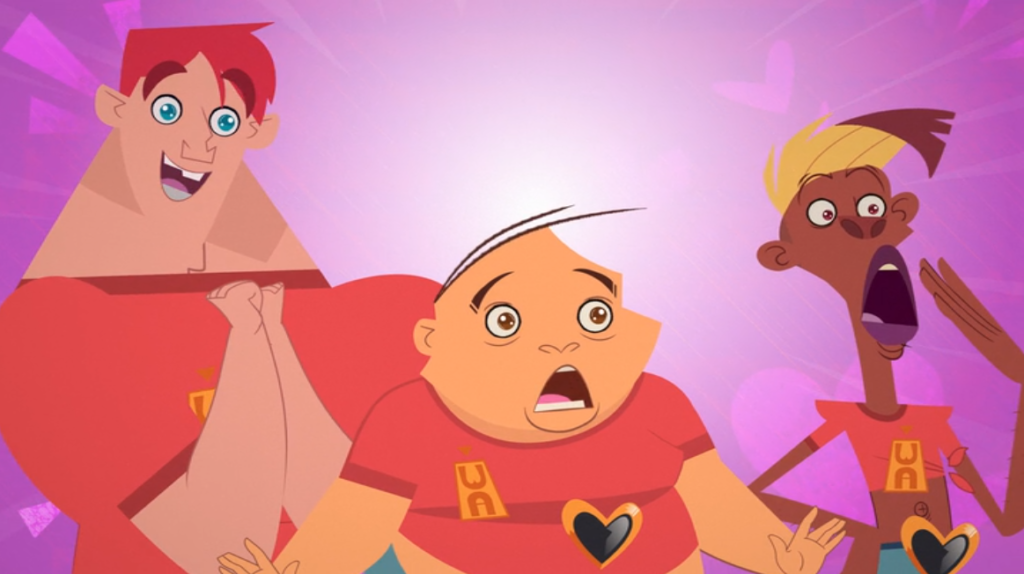 Super Drags is one of the best things happening for LGBTQ+ representation in animation right now. It’s revolutionary in its frankness of being what it is, highlights, warts, and all. It doesn’t mince words about who its protagonists are and it doesn’t treat them as a punchline. Rare is a show that is all about the fun of being gay as well as the harder parts, that can make you laugh one minute and cry the next. It’s one of the truest shows I’ve ever seen. It doesn’t matter if you’re into drag, are any shade of queer, or into magical girls or not, Super Drags is a must watch. It is rated TV-MA, so keep that in mind for your viewing (it is adult animation after all). It’ll take you, like, a little over an hour and a half to watch all of the first season. That’s shorter than a lot of movies. It’s on Netflix. What are you waiting for?