We’ll Happen Again and Again: A Personal Reflection on Bubbline

The first time I thought to myself that I maybe, might’ve been gay just a little bit, I was 18 years old. At my desk in my college dorm room in the first month of freshman year, I felt utterly alone. This wasn’t something that I could tell my mom when I called her at night to let her know how I was doing, not something I could tell my friends who I knew for years or my roommates who I knew for weeks; I don’t think I even knew anyone who wasn’t straight then. In my mind it became a massive secret that I had to keep hidden forever, or at least until I was in my 30’s and had a successful artist’s life in a big city and didn’t have to care about what other people thought.

But I had internet access, I had a laptop, I had a curiosity. I don’t exactly remember what I typed into Google that night, but it led me to sites like AfterEllen, Autostraddle- communities I could look at from the outside and maybe one day I’d be brave enough to talk with, be apart of. And it made me hungry. I hunted and combed for any media I could find that involved two girls together romantically, anything to give me some sort of reflection as I navigated this new aspect of myself.

“What Was Missing” aired on September 26, 2011 and I’d heard about the Mathematical controversy through an article in the Autostraddle archives. I was intrigued. This was something I could grasp; it wasn’t some dated lesbian movie from 20+ years ago about pretty adults having sex, it was close and exciting. I’d watched a random Adventure Time episode or two channel surfing, right? Thus, I made it my mission to binge watch the show so I could find out the truth about this mysterious relationship between Princess Bubblegum and Marceline the Vampire Queen. Was it really like that article said, were they exes? Were they being swept under the rug?

It wouldn’t be a stretch to say that Bubbline as a ship completely kicked open the closet door for me. It was 2012 and there really wasn’t much to choose from even then unless I wanted to watch something more like Grey’s Anatomy or The L Word (which I didn’t). I was 18 and I was in art school, feeling so much and trying to figure it all out. I could connect with every emotion Marceline sang in “I’m Just Your Problem” and even if I hadn’t personally experienced it all yet, I hoped to be able to give a girl my t-shirt and have her hang onto it like Princess Bubblegum did. It was something I instantly connected to when I finally got to the episode in the chill of autumn, developing crushes on all the wrong people and too afraid to let myself do anything about them.

I watched every subsequent interaction between these two with desperation. “Sky Witch” commenting on how sentimental the aforementioned t-shirt was to Bubblegum, “Red Starved” showing Marceline actually drink the red from Bonnibel’s pretty pink face in a less than poetic way. I’d read the comics, the Marceline and the Scream Queens miniseries, read fanfiction, found and saved fanart. I clawed onto anything that fueled the fire of hope that these two loved one another in a more-than-friends way. But years passed and I found more images I connected with: Korra and Asami from The Legend of Korra, Pearl, Ruby, Sapphire, nearly the entire cast of Steven Universe, Sam from Gone Home, Max and Chloe from Life is Strange, Ellie and Riley from The Last of Us, on and on and on. And through all this Adventure Time was still going on, but the hunger I felt wasn’t being as satisfied by it anymore in the face of actual canonical relationships. I got excited by “Varmints”, the Stakes miniseries, and “Broke His Crown” but it was all so muted. A suggestive fever dream, a roundabout “I love you”, a blush here, a small touch there, a blink and you’ll miss it handhold in the corner of the screen almost obscured by the Cartoon Network logo. 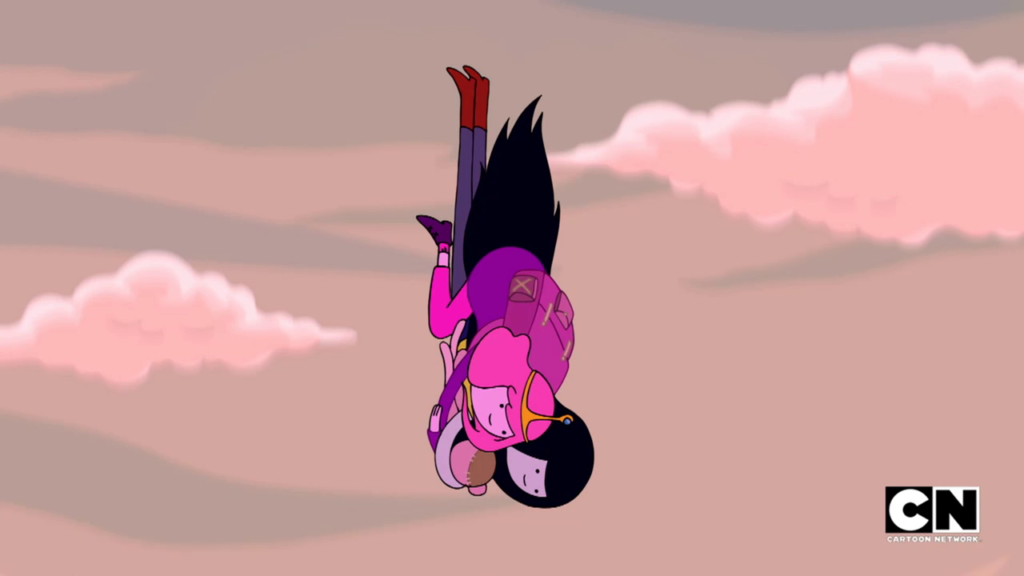 It had gotten to a point where I was getting tired of trying to figure out if they were together. They took me to the dance but I wanted to mingle with people that weren’t giving me mixed signals. But with the buzz that the series finale was near, the question came up. Will anyone make the clarification? Will there be a definitive action, a moment, a word where once and for all it’s clear that these two characters, who just happen to be girls, are together romantically? I wasn’t confident. The record for that sort of thing had amounted to the handhold at the end of The Legend of Korra that was downgraded from a kiss, the Ruby/Sapphire kiss that had just happened in Steven Universe, and a cancelled Mysticons kiss. Things weren’t looking good. 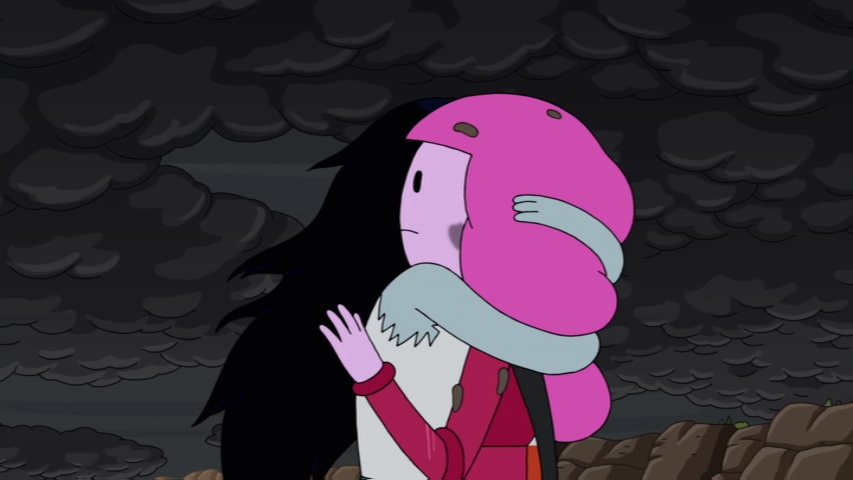 So around the 30 minute mark of the finale, Princess Bubblegum seems to get crushed by one of Golb’s beasts. Marceline sees this, goes into a rage, and turns into the vampiric cloud form we last saw in The Dark Cloud. She proceeds to beat the beast into a gooey pulp while it’s shown that Bubblegum survived. After Marceline is finished, Bubblegum calls to her- “Marcy?” and Marceline rushes to embrace her. She exclaims “You scared me!” and Bonnie seems almost presently surprised at this, a clear smile in her voice. “Even when we weren’t talking, I was so afraid something bad would happen to you and I wouldn’t be there to protect you and…I don’t want to lose you again,” Marcy frantically blurts out as tears stream down her cheeks. Bonnie’s face contorts into a confused realization, and then she smiles and pulls back to reassure Marcy that she’s tough and nothing’s going to happen to her. They share a laugh as the camera pulls out to show their full bodies, Marcy still touching Bonnie’s waist, Bonnie touching Marcy’s shoulder. They smile as their eyes close and their faces meet, the simple lines representing their mouths shrinking and puckering sound effects going off. They hold each other closer as they deepen their kiss and the scene is over. 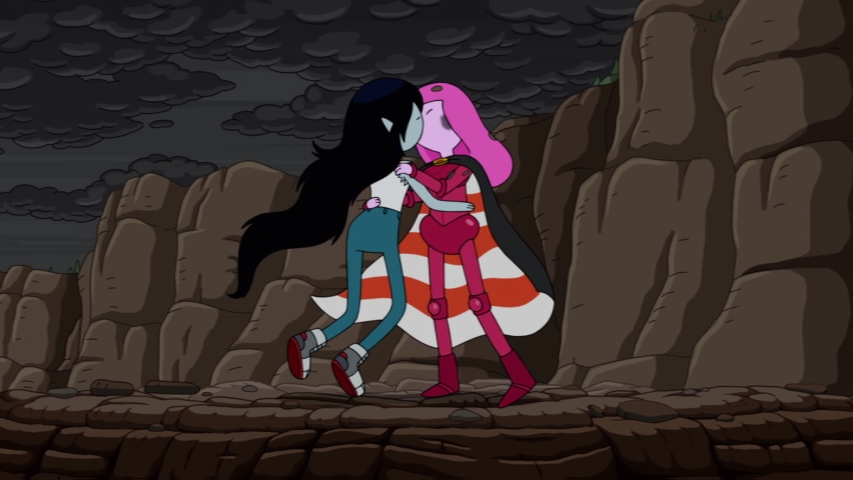 The clearest romantic shorthand we have in this world of ours is, well, a kiss. A kiss on the forehead for caring, a kiss on the cheek for affection, a kiss on the lips for romance. And it happened in this episode for Bonnie and Marcy. Finally. An answered question, played so coy throughout the years, given something definite. While they had so many other small moments throughout this finale, the bottom line is that Princess Bubblegum and Marceline the Vampire Queen kissed. It was a declaration that their love was real and not just something people were making a stretch to see. It was validation of my hopes and dreams for the past six years, for them and myself. Somewhere out there, my 18 year old self can rejoice and I can tell you she did big time. But 24 year old me has been mulling it over, wondering where we are in the grand scheme of representation. 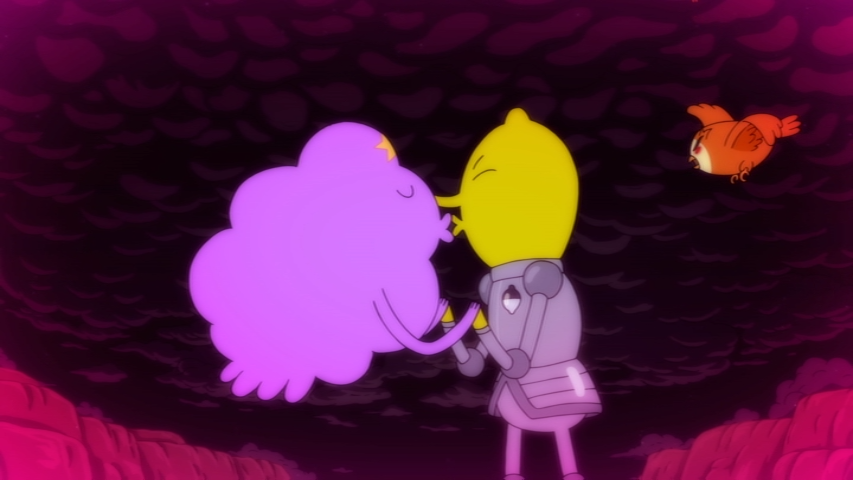 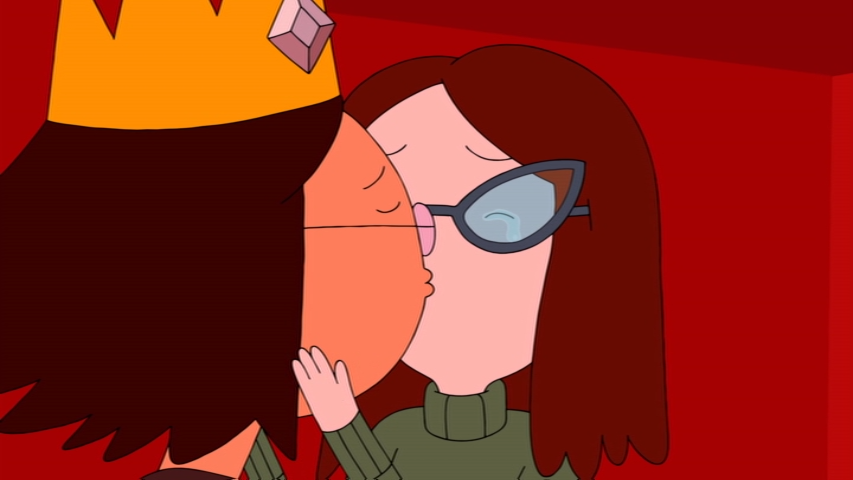 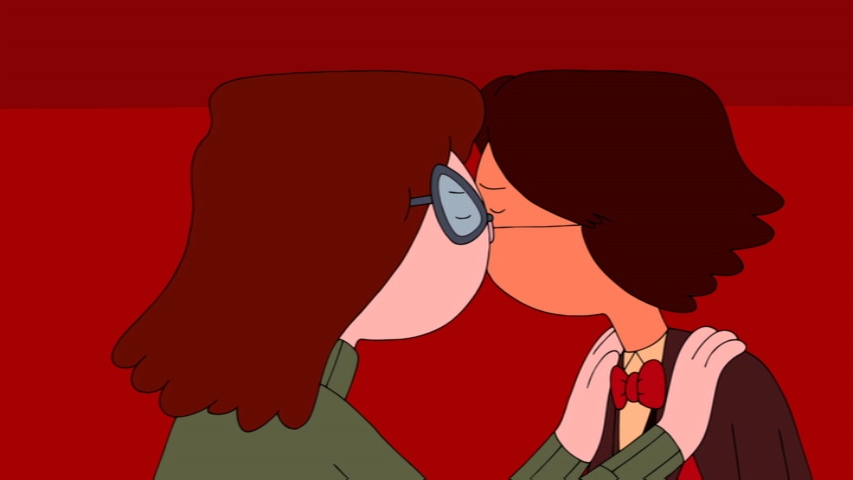 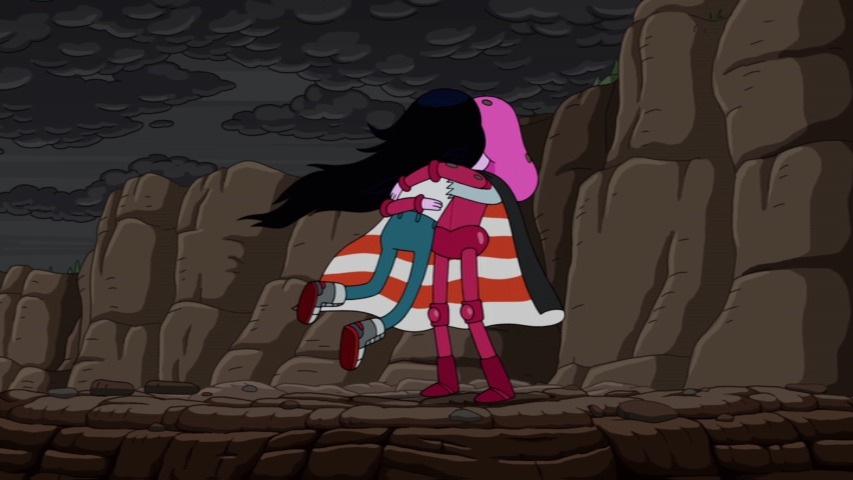 So one of these things is not like the others. These are all of the kiss on lips interactions from the finale. Lemongrab and Lumpy Space Princess, Simon and Betty, and Marceline and Bubblegum. The only one that doesn’t look that clear what it is is probably the latter. It could just be a tight hug, who’s to say? Blink and miss the first few frames, strip the audio, the context, turn it into a still image and we just have some closeness. And it’s not something I really want to think about. I want to play it off as being a nonchalant addition to an assumed canon relationship. But the thought pulses how we’re better than we were in terms of showing queer relationships, affection, love in fiction, but it’s still restricted. It can still be just two “friends” being close to those that cannot accept that two girls can be in love. How many people have lobbied for inclusion and representation only to be given an inch for every mile heterosexual relationships were given? I’ve found that one of the hardest tightropes to walk in being a lesbian viewer in general is both being happy for what people have done while being critical of the societal systems that don’t let it be more. No one person, television show, whatever, can completely break the status quo at once. Progress takes time and people willing to push to make it happen, which was definitely in the hearts of those who worked on this show. 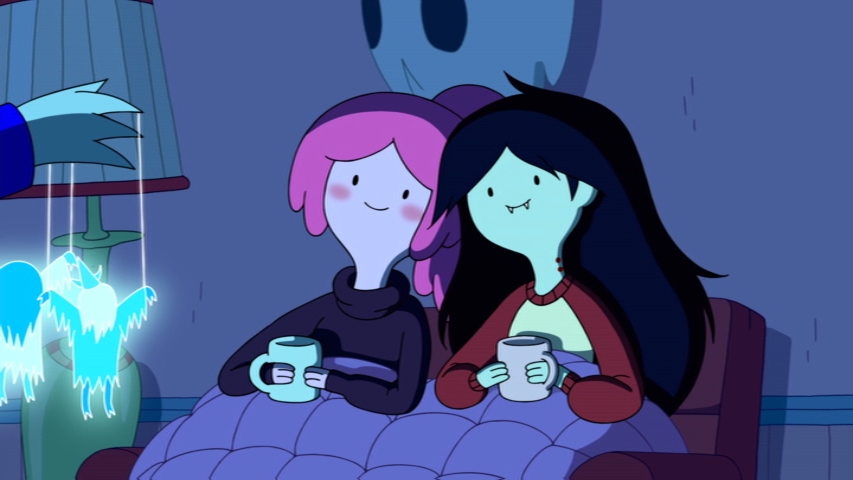 Marceline and Bubblegum’s relationship wasn’t perfect. But at the end of the day, it was a showcase of two people who truly loved one another, with all of the ups and downs that come along with it. The anger, frustration, longing, sadness, hope, tenderness, and joy are what loving someone tends to be about in this life. It was real. It was beautiful. It took up a large part of my heart, always for the better. And now the show is over, and I feel an immense sadness. I’m not quite sure what to do when something you’ve loved the last six years ends. But I will say that I’m thankful to Adventure Time for making me the proud lesbian I am today. I think of my younger self, basking in the glow of her laptop and yearning to feel as much towards someone as Marcy and Bonnie seemed to feel towards each other. And I roll my eyes and laugh at myself, because it is possible. You’ll keep living despite what you think and life will keep happening and you’ll love people again and again, and it’ll hurt and you’ll be angry and frustrated but still have so much hope and love inside of you. It just took following this story of two girls who lost each other and slowly glued their relationship back together to get you to believe that, Sam.