A while back I did my Winter Anime Review/Spring Preview article and of all the shows I mentioned I would check out in the spring season, missing from that article is Sakura Quest. I did not see it when it premiered, maybe because the synopsis didn’t do a good job of explaining the show. To me it sounded like it was a reality show parody of shows like Real Housewives, but I heard so many good things about it from anime reviewers that I respect that four episodes into the series I caught up and have been following the it since. That rarely ever happens with me; when the new season starts, I make up my mind what I am going to watch and I stubbornly stick with it. At most I might check out a show that is two episodes in, but never as much as four.

I am glad I made an exception for Sakura Quest because it’s an awesome show. It’s about five girls living in a small Japanese town trying to gain tourists for the town while having to deal with the town folks’ traditionalist ways.

What I love about the show besides the Opening and Ending which are both so catchy, especially the Ending, is that all five female protagonists are very different in age and background, and they are all adults (the youngest might be 18, but still all adults). Most anime that have all main female characters feature teenagers in high school that are either a harem for some guy or a magical girl team. This is just five women living their lives, and so far no male love interest, which I love.

The main character is Yoshino Koharu; she is fresh out of college looking for a job. Having grown up in the country, she tried desperately to find a job in the big city of Tokyo which is her dream, or at least she thinks it is. Her employment agent sent her on a job as town “Queen” for the town of Manoyama thinking it is a job for a day, but not reading the fine print, it turns the job is for a year. Yoshino at first tried desperately to get out of the contract, but upon meeting the townspeople and making friends with the other four main characters, she decides to stay. The “Queen” title is for the tourism board, and her job is to attract tourists. 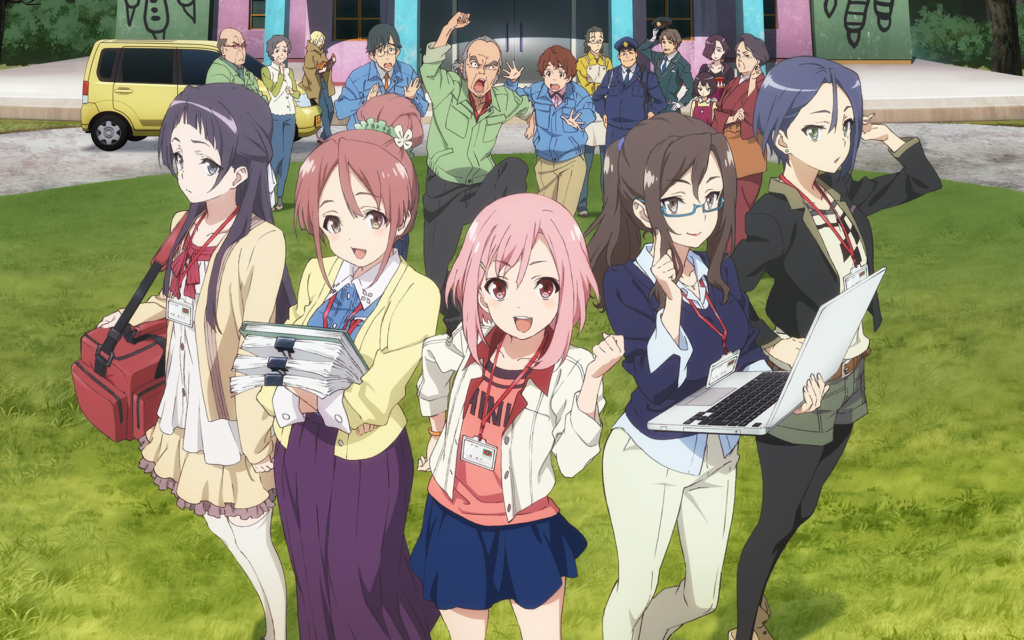 The other characters are Shiori Shinomiya, a very kind girl and a member of the tourism board, she is Yoshino’s first friend in Manoyama village. Maki Midorikawa, an amateur actress, who like Yoshino is at a stopping point, not knowing what to do with her life. Ririko Oribe, the granddaughter of one of the town traditionalists who allows Ririko to help the tourism board even though they don’t see eye to eye. Ririko is the youngest of the main characters, very shy, and a fan of the occult, but despite that she is slowly starting to open up to the other main characters. And finally Sanae Kozuki, a web designer who takes refuge in Manoyama to escape the grind of the big city and who also has an intense fear of bugs.

Even though Yoshino is the main character, the other characters get an equal amount of screen time, development, and focus. It is truly an ensemble show; Yoshino is the glue that put them together, but by no means is this “Yoshino and friends”, which is good because other shows like Sailor Moon can miss the mark there. Even my favorite show Little Witch Academia can fall into that trap.

All of the characters are super likable, even Ririko’s grandmother who at first glance I thought was going to be an antagonist, is actually a likable character just like everybody else. There is no antagonist or villain in this show, but conflicts still exist and get settled. You don’t have to have a bad guy to have conflict, which a lot of media forgets. Another thing is that the five main characters are never catty with each other and don’t say mean things behind each other’s backs or to their faces. They act like how friends should act, and I appreciate that.

This is an excellent show and I highly recommend it. It is an original series not based on any other media which is something you don’t see much of in anime. Right now the series just aired episode 11 and is going to have 25 episodes overall, so you have plenty of time to catch up, but you have a lot to catch up on. The series in Japanese with English subtitles is available on Crunchyroll, with the English dub version is available on Funimation’s website. So check it out!