A Minimalist Use of Animation in the Documentary “The Witness”

In the early hours of March 13th, 1964 in New York City, Kitty Genovese was murdered by Winston Moseley. It gained notoriety from the account that thirty-eight witnesses saw the murder happen and not one person called the police, birthing what is known as the bystander effect. Fifty-one years later a documentary called The Witness came out investigating the supposed apathy of the bystanders, the press response, Kitty’s life, the life of her killer, and the life of her younger brother Bill who is doing said investigation throughout the film.

It is a pretty emotional movie and I’ll admit the last twenty minutes had me crying. It takes interviews, transcripts, letters, photographs, so many fragments of this case and the people involved and affected in order to try to paint a full picture of why this woman died. And, of course given the content of this website, there is animation helping string together these pieces of information. 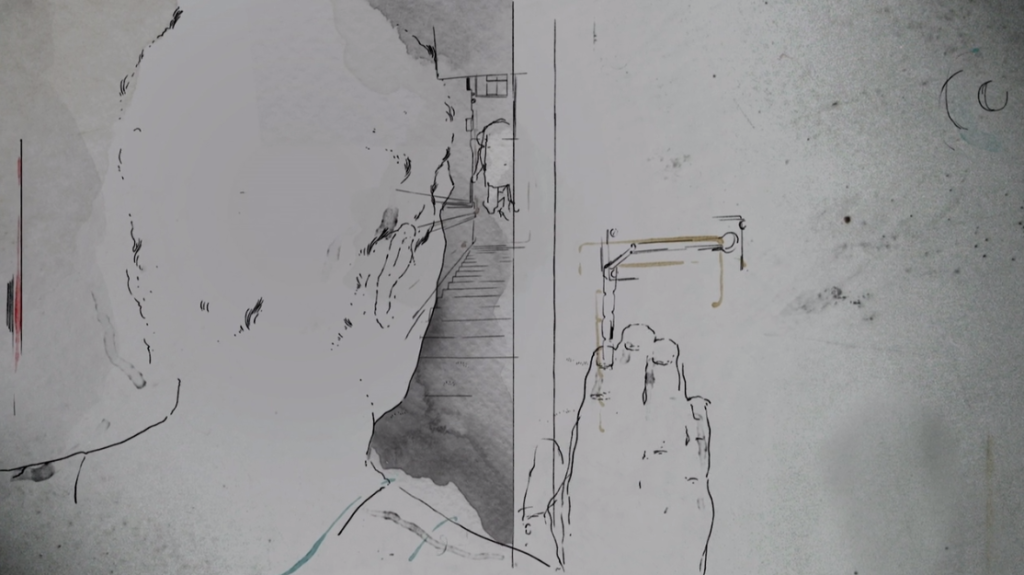 There are four animated segments over the course of the documentary. The first illustrates two eye-witnesses who stood by and watched the murder happen with little to no action: Joseph Fink, the elevator operator at the apartment building across the street from the attack and Karl Ross, a neighbor who was atop the stairs in the hallway Kitty had managed her way to for help before being attacked again. The animations are sketched contour lines and minimal watercolors, giving us a general idea of the scene but not too much detail. We view the men in the foreground over their shoulders, turning their heads, shutting their doors, while the scene plays in the background. 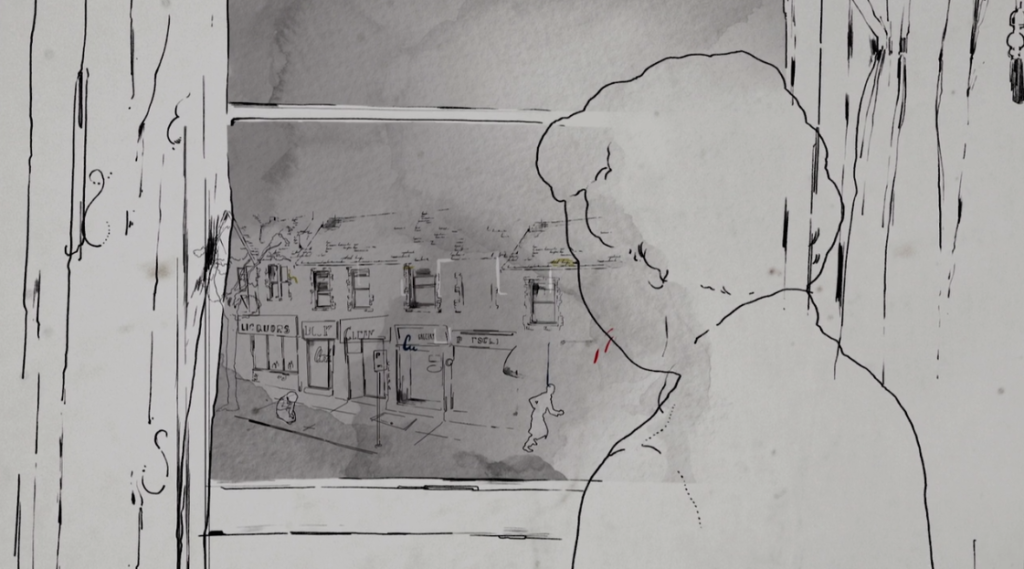 The second brings to life three of the eye-witness accounts from the trial transcript. Irene Frost, Robert Mozer, and Andree Picq all heard screaming, saw Kitty and the killer, but only watched on or yelled back at the commotion. This section is set up in a detective manner; we open with the witness’ name, an photo of them, their residence and how far away in feet and inches their window was from the murder like a street view map. Their testimony is vocally and animatedly reenacted, again in a contour sort of way and over their shoulders as they look on to the action. 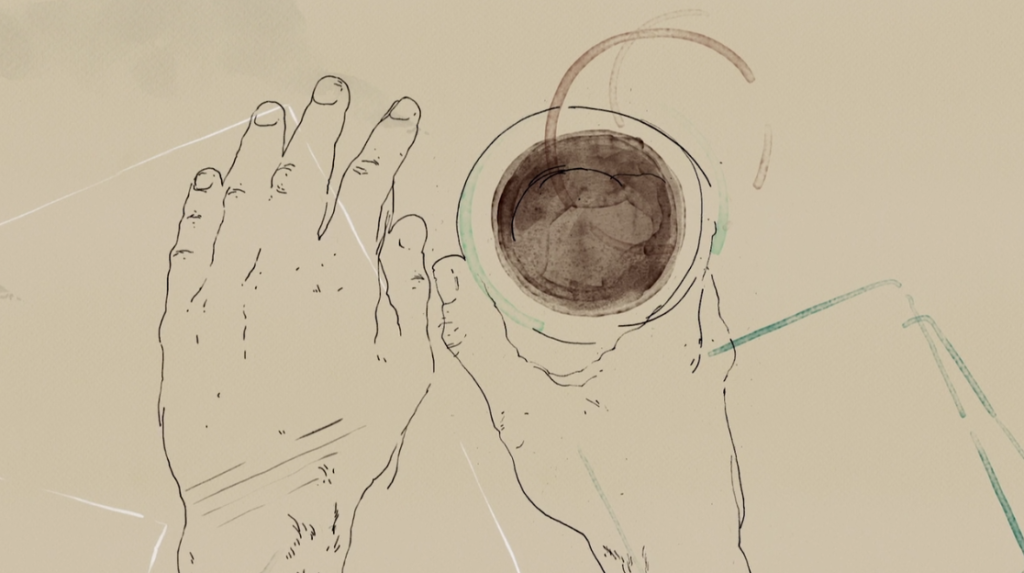 Third and by far my favorite is the interview with Kitty’s brother Bill and her lover Mary Ann Zielonko. Mary Ann had declined to do an on camera interview, but had allowed an audio one. The segment begins with Bill pushing record on the tape recorder, and pans to the two having coffee, only showing their hands and their coffee cups from a top-down view. Mary Ann begins the story of how they met, illustrated with far less detail than any other of the previous segments since she cannot remember the name of the bar they had met, a headless guitar player strumming along to barely formed wine glasses. The animation is memory-like: there are no faces on any of the people, words are scribbled and malformed, and buildings are outlines. Mary Ann speaks of her love for Kitty and wondered if Kitty had loved her as much, figuring if she had more time she would’ve figured it out, as the two faceless women run across presumed lights and buildings until one disappears and the other runs alone. She speaks of the police knocking at her door and having her identify Kitty’s body in an rough idea of a hallway, the dog named Andrew amounting to no more than scribbles that Kitty had gotten for her that eventually Kitty’s dad stole and disposed of, of sleeping with Kitty’s shirt as it floats by long after she was dead and how she has yet to heal fifty or so years after the fact. 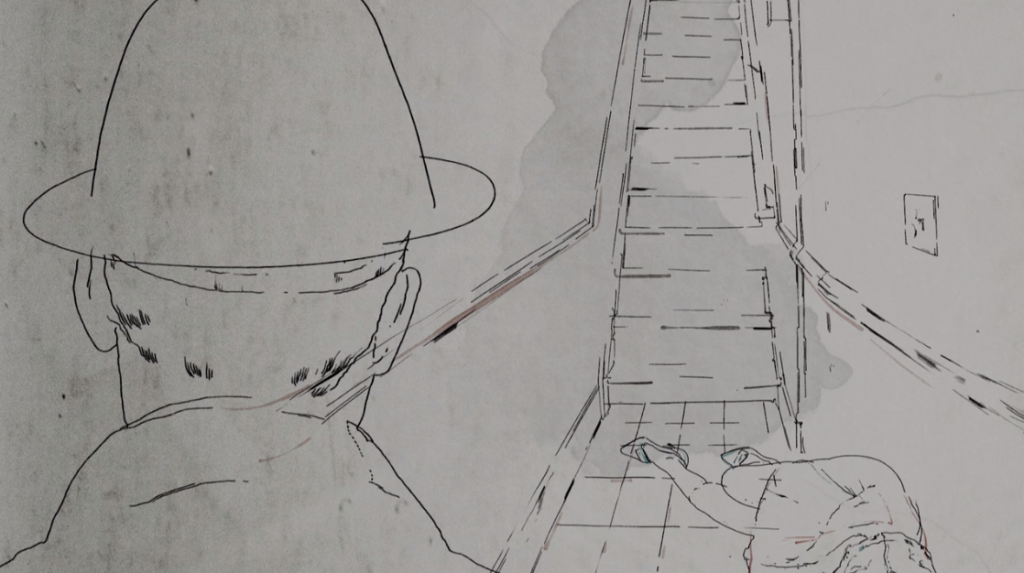 The murderer’s version of events takes up the fourth animated segments. It plays out much like the second, taking his confession to form a street view map of what happened. Again over the shoulder, we see Winston Moseley looking on to Kitty Genovese as he is static, the beats of Robert Mozer yelling and Karl Ross opening his apartment door as logical moments of stillness. 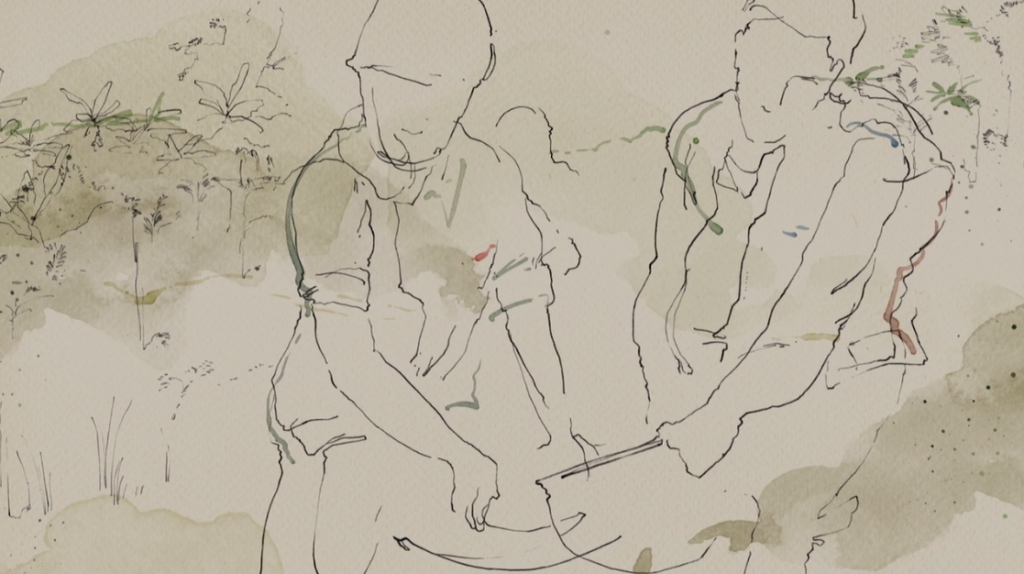 Finally, the fifth is a short account of Bill’s time in Vietnam. He had been caught in the wake of a bomb and had lost his legs, as the animation and his narration drifts off to the street where Kitty was murdered, reflecting on the feeling of no one coming to save him as he felt his sister must’ve felt as well.

The animation’s intent is to show us what we cannot see, what there are no photographs or footage for. We are given a picture of events that existed only as descriptions of memories, a stylistically minimalist approach, and it really works. For me it calls back to Errol Morris’ The Thin Blue Line, another documentary investigating a murder that instead opts for live reenactments of witness testimony rather than animated ones. But then again that film was more of an investigation of the crime rather than the elements around it; it asks “who did it” while The Witness asks “why didn’t any one do anything help”.

Overall, The Witness was a good, informative, and emotionally impactful film. It is at its core the story of a brother trying to come to terms to what happened to his beloved sister. Sure, the parts that were supposed to be natural interactions felt staged but what documentaries aren’t? It definitely shows more light on a case that everyone cites as the example of America’s abhorrent lack of morality: the thirty-eight witnesses were not the monsters that the media had made the world believe. Definitely see this movie if you want a new doc to watch or if you’re at all familiar with the case. Or both. It’s on Netflix right now.