Adventure Time: Broke His Crown. You Got a Boyfriend Yet?

It’s been a while since I’ve talked about Adventure Time. Mostly because I’m a terrible person and I only care when my ships are featured. I have watched everything between “Stakes” and this episode I’m about to talk about, but it’s nothing much to really get in depth with. Except the BMO special. Maybe I’ll rewind and write about that sometime.

This episode is connected to one of the bigger plot threads that involves Simon’s girlf Betty in modern day Ooo. You probably want to watch “King’s Ransom” if you haven’t before this. Or “You Forgot Your Floaties” before that. Or “Betty” before that. Anyway. It has to do with those. I’m not a recap machine. We’re here for something else. Bubbline. 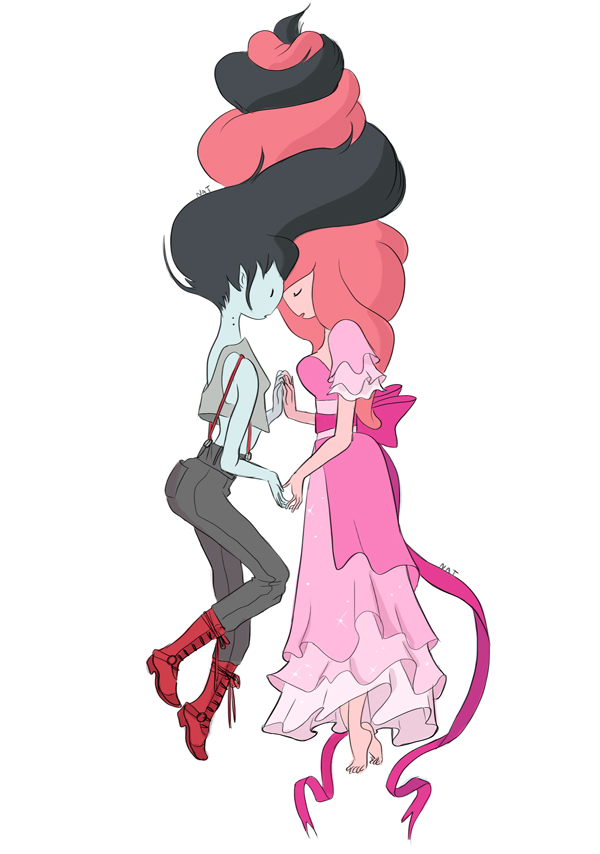 I started watching Adventure Time in the first months of my freshman year of college. It was 2012. With high school oppression being out of the way and living on my own in the big bad city without mom and stepdad around, in addition to going to an art school in which pretty much 3 straight people are enrolled, I felt freedom to really start acknowledging the whole “I like girls” thing that had always been in the back of my mind since I was like 10, maybe even younger. So I started doing some research. I found websites like Autostraddle and After Ellen which in turn helped me find media like But I’m a Cheerleader, Fried Green Tomatoes, and of course, Adventure Time. At that point, there was a months-passed (I think at the point I found out about it it had been a year) controversy over a web recap thing that Frederator was doing called Mathematical in Season 3. It only lasted until the episode “What Was Missing” since the Mathematical that went along with that episode posed a question of whether or not viewers think that Princess Bubblegum and Marceline the Vampire Queen should get together. It caused a big ol’ controversy that had articles written about it and resulted in the cancellation of Mathematical. I’d heard about this supposed homosexual relationship from those articles and I wanted to see what this hubbub was all about. So I started watching the show and here we are today. 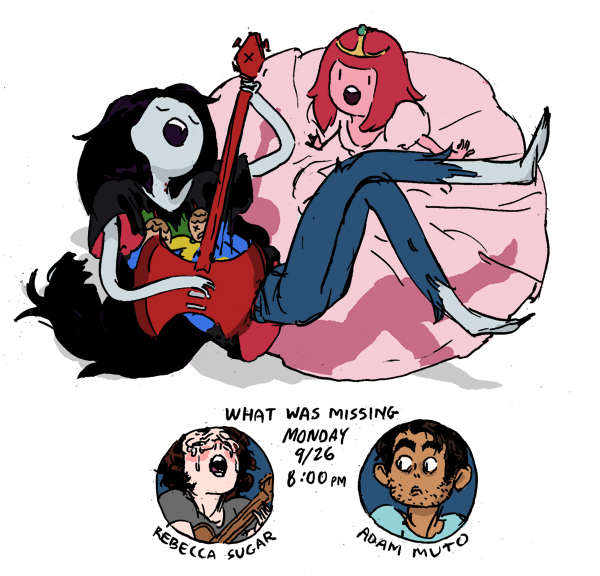 That is all to say that my viewing of Adventure Time began with shipping. That is the expressed purpose of why I started watching the show, like it or not. Bubbline is something that is intertwined with me figuring out my gay identity as silly as it sounds. It helped me out. And honestly it’s what keeps me interested. I was very charmed by Finn and Jake’s adventures when I began, obviously enough so that I am still a viewer today. It helps that the show has grown with me, Finn and Jake’s adventures have become more and more existential and asking about the universe. But my excitement sparks when I see Marceline and Bubblegum together, it solidifies that I will watch this episode and not just binge it with ten+ others when I want to write an article.

“Broke His Crown” marks the first episode since the Stakes miniseries that Marceline and Bubblegum have been together on screen. Marceline is making Bubblegum go to a dinner party with Ice King. It’s all very reminiscent of going home to meet the parents, really. Marcy holding PB’s hand asking her to get along with Ice King, that it would mean a lot to her. Wiping off the remnants of PB’s unexpectedly frozen drink off of her face with her finger. PB blushing and shrugging off Marcy’s comment that she’s “dynamo on the mic” (which I find funny considering PB has had like one solo song the whole series). The first two minutes are so comfortably intimate and the episode is filled with interactions like this. 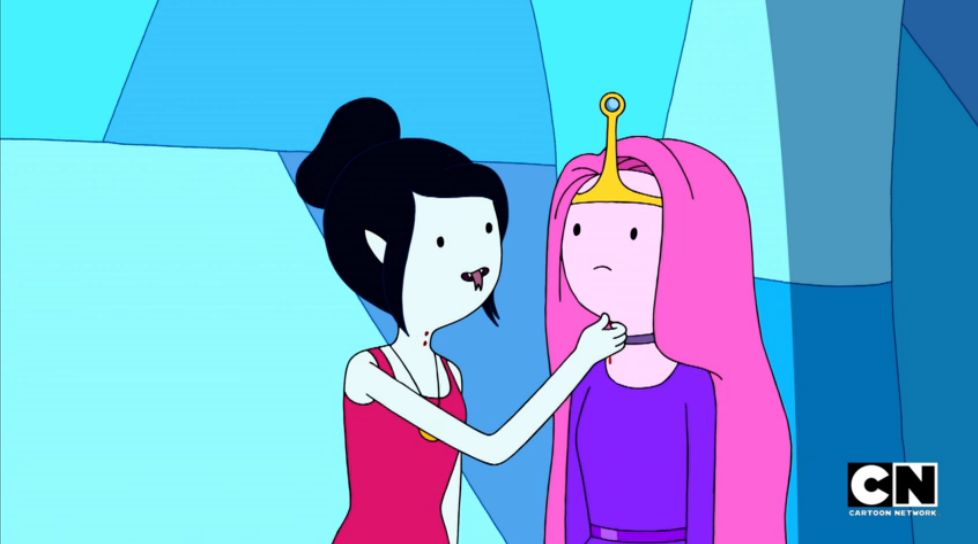 But going with the title of this article, and one that hits home to my own going home to meet the parents scenario, is when we’re inside of the Ice King’s crown. We meet up with Gunther and Simon (along with the original Santa Claus which no one but Marcy is excited about) to figure out what’s going on. Simon apologizes to Marceline over not spending time with her when Ice King was reverted back in “Betty” and he asks if Marceline has a boyfriend yet. She laughs an awkward, nervous choke, “No.” Bubblegum turns around to look at them and smiles to herself as she turns back. Marceline then talks about Ash for a little bit. 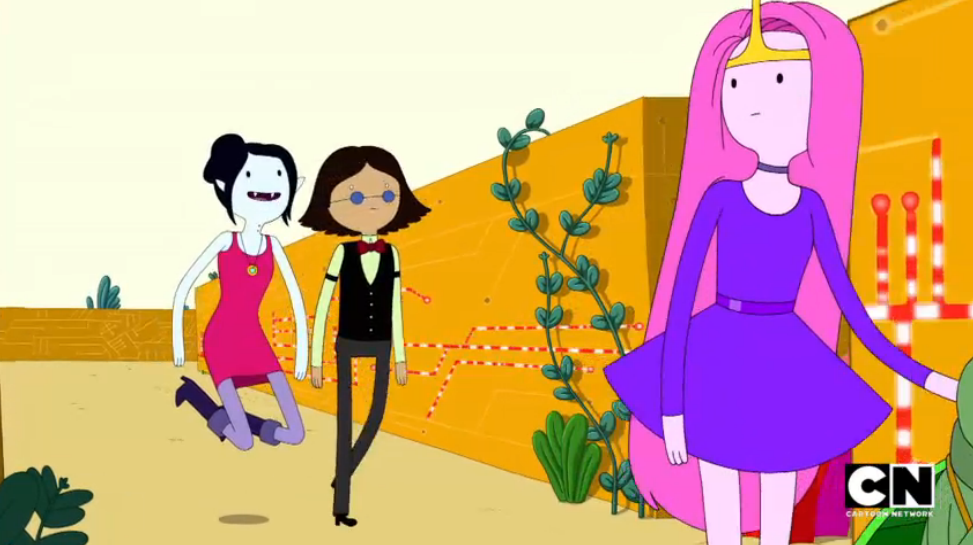 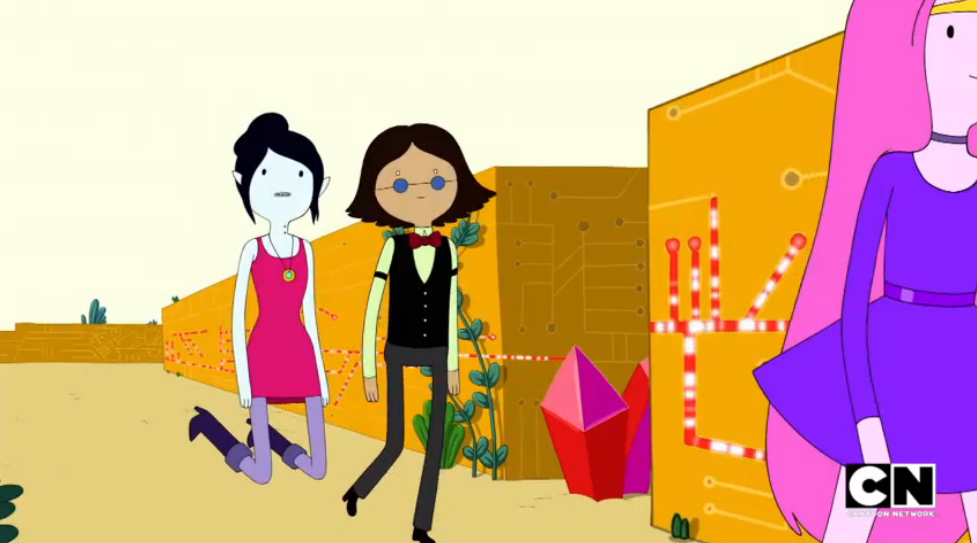 I’ve had the same question asked to me. The answer is always, obviously, no. And I’m not out to my family so they wouldn’t know to ask otherwise. Marceline isn’t either I guess given the singular tone of the question. But it’s an overtly coded exchange here. I’ve consumed enough media, I’ve taken a film class that consisted of dissecting what shots mean, I’ve done enough of this in my personal life to know, duh, the overly loud negative answer means there is a “but” after that no, and even then I usually don’t have my current flame giving a small smile to the sound of it. Maybe Marceline doesn’t want to tell Simon, who in case you’ve been in a coma, is her father figure. Maybe there’s some fear of a negative reaction there. Buuuuuuut the AT team isn’t saying anything in show or out of show one way or another to give this interaction any weight besides its coded dumbbells. It means nothing if you aren’t looking at it through a somewhat experienced gay lens, whether it be personal experience or just seeing it in various media over and over. It’s just Marceline stating a fact with the camera weirdly focused on PB in the right foreground.

The lack of confirmation trips me up and drives me up the wall. I get the common excuse people use for the ambiguity of PB and Marcy’s relationship: the sake of marketing the show in other countries, but (un)fortunately there is a way to get around that in the form of the Hide Your Lesbians trope in places where deviance from the “norm” is looked down upon or dangerous to embody. Then there’s various headcanons that say that they were never together and are slowly getting together so that’s why it’s all unlabeled but dude, we have Finn crushing on girls all the time and they call it what it is. There’s a billion excuses as to why and none of them seem to be a satisfactory answer. I’m tired of accepting other people’s darts on the board as bullseyes.

Logically, in 2016, I don’t understand why they’re being coy seemingly for the sake of being coy. This is five years after “What Was Missing.” The grounds of television, especially what’s shown on the major three animation networks, have shifted. We’ve had shows like The Legend of Korra and Steven Universe break down some of the walls that were keeping a ship like Bubbline from being acknowledged officially, network or crew-wise. In show they reference Slime Princess’ pansexuality in “Love Games”, the possibility of Finn having a crush on a guy in some season 1 from distant past, Prismo and Jake’s relationship (unfortunately Jake thinks Prismo’s attachment to him means he really needs to get Prismo a girlf). They can do it, so why are they not giving Marceline and Bubblegum a name? The closest we get is PB calling Marceline “guuuuurlfriend” this episode. The comics are better about it, but they aren’t technically canon and I guess there isn’t as much at stake if it gets a little gay. Maybe they’re still burned by the Mathematical incident. But honestly, that’s been in the air for five years and this relationship being anything but romantic in the past, present, or future of its canon is an opinion held only by aggressively straight people who won’t stir up anything but untagged tumblr posts/bible belt moms (even then they’re pretty keen and won’t let their kids watch in the first place probably).

We’re prime for the lgbt+ revolution of animation, television on the whole, so why isn’t Adventure Time pushing ahead? When can Marceline answer “No boyfriend, but I’ve got a girlfriend,” instead of me having to write a 1400 word article frustrated about why she didn’t? Adventure Time has at least another season, probably more. So we’ll see I guess.